The race for the leadership of Britain is being very closely and eagerly watched by one country located over 4,000 miles away: India. That is because two of the contenders in the race are of Indian origin: Rishi Sunak and Suella Braverman. Sunak, 42, is related to N. R. Narayana Murthy, founder of Indian outsourcing giant Infosys Ltd: he is his son-in-law. Sunak’s colleague Braverman, currently Britain’s attorney general, was born into a Christian family of Indian origin.

Her parents migrated to Britain in the 1960s from Kenya and Mauritius and came with virtually nothing. Should either of them win, the first Prime Minister of Indian origin will be entering 10 Downing Street. Sunak is the bookmakers’ favourite. A report in a section of the Australian media has said Rishi Sunak is on course to become one of the final two candidates to replace Boris Johnson as British Prime Minister. The former Chancellor of the Exchequer won 88 votes in the first round of voting.

Sunak told the BBC he feels great about the result of the first round of voting. Sunak said his first priority were he to become Prime Minister would be curbing inflation head-on, not tax cuts. Sunak told BBC radio on Thursday, “I will get taxes down in this parliament but I’m going to do so responsibly, because I don’t cut taxes to win elections, I win elections to cut taxes,” he added. 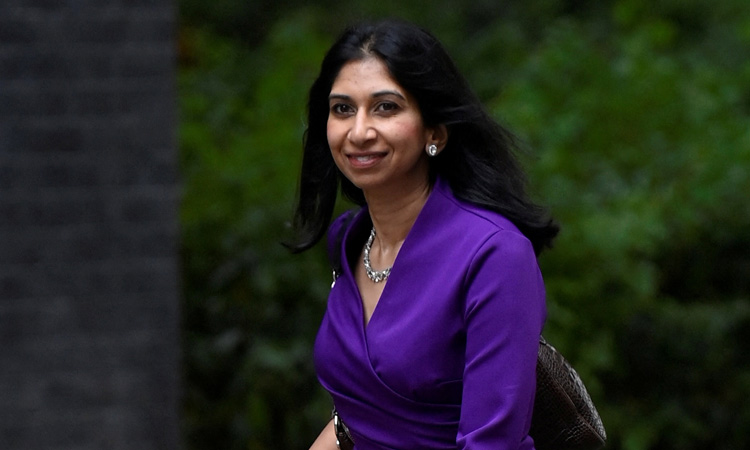 Sunak dismissed talk that he was too rich to run the country during an economic downturn, saying he had the experience to handle tough hurdles. He also said he does not look at people’s bank accounts to pass a judgement on them. He judges them by their character. Asked if he understood the financial pressures in the country, he told BBC Radio: “When the pandemic hit, I understood full well the impact it could have on millions of people up and down the country.”

When asked if he would stay in Britain whether he wins or loses, Sunak said, “Of course I will stay.” He also said he would keep the Rwanda deportation plan. Former British Foreign Minister Jeremy Hunt, one of the candidates who was knocked out, has thrown his weight behind Sunak. Indians in the Subcontinent are ecstatic over the prospect of seeing one of their ilk helm the affairs of state in the Old Blighty. Twitterati in particularly are feeling great to see an Indian as the British PM.

“It will be a great feeling to see an Indian as the PM of a country which very ruthlessly ruled India for a very long time!” said a Twitter user named Emon Mukherjee. Leading Indian magnate Anand Mahindra joined social media posts on the possibility of a British Prime Minister with Indian heritage. He shared a digitally altered photograph of 10 Downing Street, with its famous black door decked up with marigolds and mango leaves.

Some Twitter users have coined the slogan “The Empire Strikes Back.” Britain ruled India for about 200 years before the South Asian nation gained freedom in 1947. There are around 1.4 million Indians in Britain. Braverman’s mother worked for 45 years in the National Health Service. She was awarded the British Empire Medal for her long stint in the National Health Service as a nurse and for voluntary work abroad.