A gun carriage procession takes the coffin containing the mortal remains of General Bipin Rawat (inset) to a funeral site in New Delhi on Friday. AFP

India’s top general, Bipin Rawat, was cremated in New Delhi on Friday with full military honours, including a 17-gun salute, two days after he and 12 others died in a helicopter crash in southern India.

Rawat, India’s first Chief of Defence Staff (CDS), who led one of the world’s largest armed forces, and his entourage had been flying to a hillside military college on Wednesday when their helicopter came down in heavy fog.

Only one person survived the accident. The Indian Air Force has commissioned an inquiry into the incident.

Hundreds of soldiers escorted the carriage bearing the 63-year-old general’s body on its final journey through India’s capital. A dozen senior military officers had earlier kept a vigil while his body lay in state at his home. 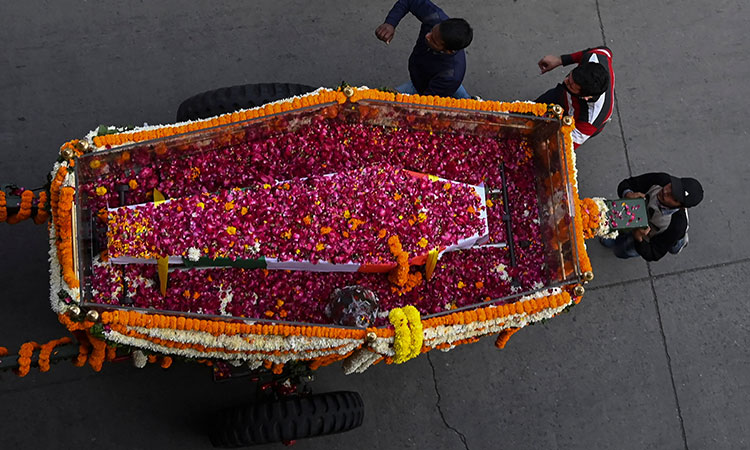 A coffin containing the mortal remains of Bipin Rawat is transported to a funeral site. AFP

Onlookers showered flowers on his coffin during the procession, and dozens holding the Indian flag ran alongside the carriage, some shouting “Hail mother India.”

The bodies of Rawat, his wife and 11 defence personnel who also died in the crash were brought to New Delhi late on Thursday, where Prime Minister Narendra Modi and others laid wreathes before the flag-draped coffins. “India will never forget their rich contribution,” Modi said.

Modi had handpicked Rawat, a decorated general, as CDS in late 2019 with a mission to reorganise India’s army, air force and navy into a single, modern force with US-style joint theatre commands. 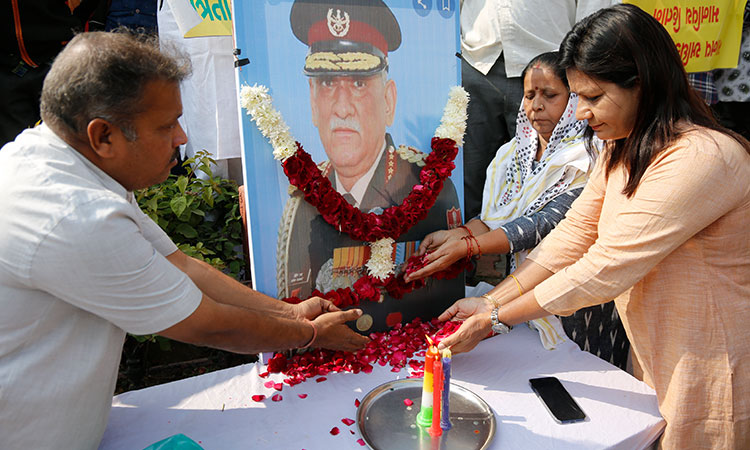 Indians offer floral tributes to the portrait of Bipin Rawat in Ahmedabad. AP

Rawat’s death comes at a critical time for India, which is embroiled in a months-long standoff with China along parts of their shared border.