This file photo shows laboratory monkeys with their babies sitting in their cage. AFP

Three monkeys have been found and killed after a truck carrying 100 primates to a laboratory crashed, allowing them to escape and triggering a police hunt.

The vehicle turned in front of an oncoming dump truck near Danville, Pennsylvania, on Friday en route to a lab in Florida.

Police said on Twitter Friday that “a small number of monkeys may have fled the crash scene into the surrounding area.”

Residents of a Pennsylvania county were warned Saturday not to approach a monkey that was missing after a crash involving a pickup that was towing a trailer taking about 100 of the animals to a lab.

State police urged people not to look for or capture the cynomolgus macaque monkey following the Friday afternoon crash on a state highway near an Interstate 80 exit in Montour County. 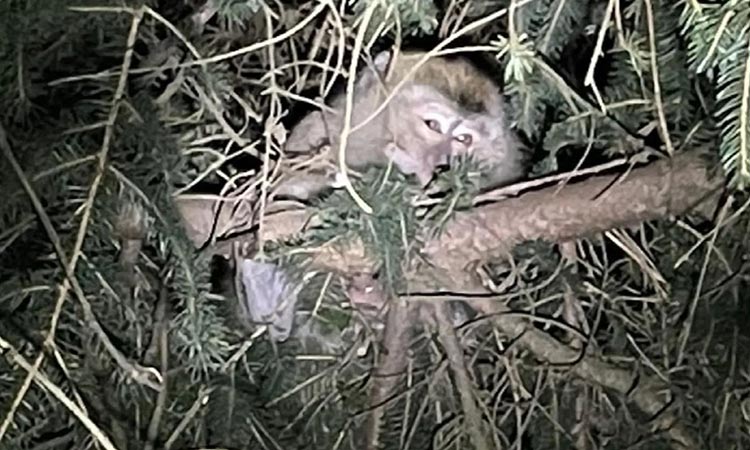 A cynomolgus monkey sits in a tree near Danville, Pennsylvania. AFP

The vehicle collided with a dump truck near Danville, Pennsylvania on Friday afternoon, en route to a laboratory in Florida.

Police said on Twitter that four monkeys had “fled the crash scene into the surrounding area.”

“Anyone who sees or locates the monkey is asked not to approach, attempt to catch, or come in contact with the monkey. Please call 911 immediately,” troopers tweeted.

Trooper Lauren Lesher said the concern was “due to it not being a domesticated animal and them being in an unknown territory. It is hard to say how they would react to a human approaching them.”

Several monkeys escaped after the collision between the pickup and a dump truck, but as of Saturday morning only one remained unaccounted for, officials said. The Pennsylvania Game Commission and other agencies searched for it amid frigid weather.