Newly-elected Lebanese lawmakers walk together as they arrive to attend the first session in Beirut on Tuesday. Reuters

Lebanon’s newly elected parliament was holding its first session on Tuesday, with lawmakers expected to choose the country’s longtime parliament speaker, Nabih Berri, for a seventh four-year term. His reelection is practically guaranteed, even though there are more than a dozen new lawmakers who won seats running on a reform platform.

The new legislature is being ushered in as Lebanon remains in the grip of the worst economic and financial crisis in its modern history, rooted in decades of corruption and mismanagement by the ruling class, which has been running the country since the end of the civil war.

Elected on May 15, the new parliament is deeply divided with no coalition holding majority seats in the 128-member legislature. The militant Hizbollah group and its allies lost the majority they had held since 2018, and now hold 61 seats — four short of an absolute majority.

The 13 independent candidates, drawn from the 2019 protest movement, and some of the Christian parties in parliament have said they will not vote for Berri, leaving him with a much slimmer support, mainly from Shiite parties. 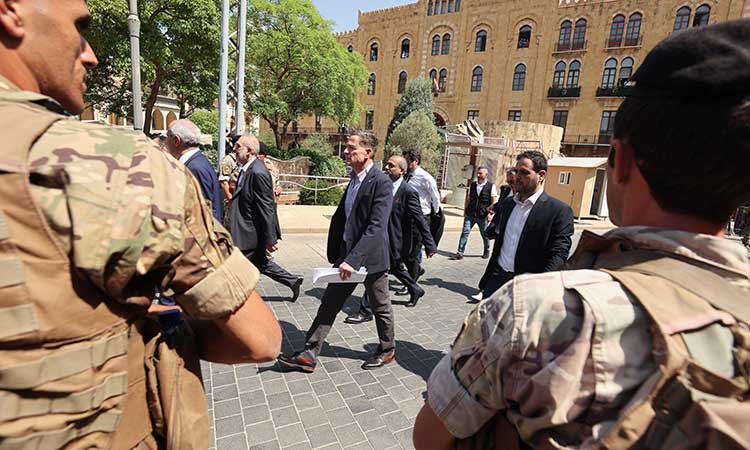 Lebanese lawmakers arrive to attend the first session of the parliament in Beirut Lebanon, on Tuesday. Reuters

Despite this, the Hezbollah-led coalition is expected to re-elect Berri, an ally who has been in the post since 1992. Berri heads the Shiite Muslim Amal militia and is the only candidate for the post of speaker, which under Lebanon’s power-sharing agreement is held by a Shiite.

Ahead of the session, some of the independents and new legislators, gathered outside Beirut’s port — the scene of a massive explosion in August 2020 that killed more than 200 people – and met with families of the victims who perished in the blast. After the meeting, they walked to Parliament, surrounded by hundreds of supporters chanting “thawra,” revolution in Arabic.

The investigation into the port explosion, when hundreds of tons of improperly stored ammonium nitrate detonated, has been stalled for months amid legal challenges by officials charged by the investigative judge.

“Beirut has the right to know who killed her,” said independent legislator Yassin Yassin, in a reference to the bungled probe.

The presence of the independent lawmakers in the legislature is a major achievement – they went into the vote fragmented and faced intimidation and threats by entrenched mainstream parties.

It sends a strong message to politicians who have for decades held on to their seats and continue to do so despite the economic meltdown, which has impoverished Lebanon and triggered the biggest wave of emigration since the 1975-90 civil war.

Tuesday’s session is expected to reflect the legislature’s divisions between pro- and anti-Hizbollah lawmakers who will likely find it difficult to work together to form a new government and enact desperately needed reforms.