Wildfires continue to spread through Corrientes province, scarring farmlands and killing protected animals and plants in major Ibera National Park on Sunday, although the light rains that began over the weekend gave some hope to firefighters.

According to figures released by the National Institute of Agricultural Technology a devastating wildfire in the province of Corrientes in northeastern Argentina has ravaged almost 8,000 square kilometres of land, or nearly 10 per cent of the region’s area.

Corrientes province is the most affected area, where officials said at least eight separate fires continued to burn and had devastated at least 9% of its territory. The flames are consuming about 30,000 hectares (89,000 acres) a day in Corrientes, destroying almost 800,000 hectares so far, according to the latest official reports. 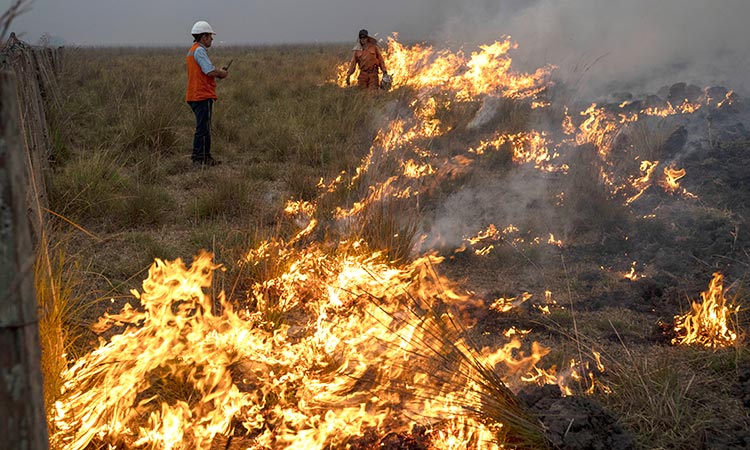 A man creates a fire wall in order to stop a column of fire in Santo Tome, Corrientes, on Sunday. AP

Strong winds, low humidity and dryness from drought have helped the fires spread since mid-January. Forecasters said the light rains that were falling Sunday were expected to continue throughout the coming week.

The mainly rural province of farms, ranches and forests normally is characterized by abundant rain.

“It never happened to us, we never lived something like this, we were really overcome,” said one resident, Jorge Ayala,

Authorities estimate losses so far at more than 26 billion Argentine pesos (more than $240 million), and experts say the province could need years to recover.

Firefighting units have begun to arrive from all corners of Argentina and also from Brazil and Bolivia. 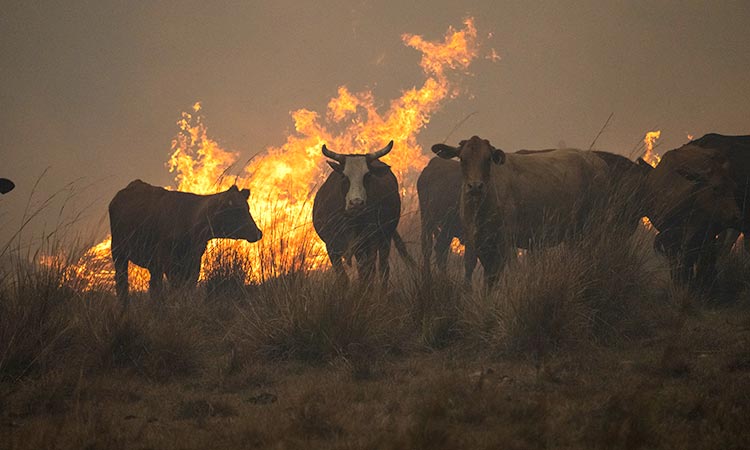 Cows gather next to a column of fire in Santo Tome, Corrientes province, Argentina, on Sunday. AP

Artists and public figures are campaigning to raise funds for the victims, while donations of basic goods are pouring into the area.

People are bringing fruit, water and ice, said Laura Núñez, a volunteer helping fight the blazes. “They bring it in a trailer, they are getting everything possible so that we can focus on the fire and try to help,” she said.

The light rainfall cheered the firefighters.

“It’s a blessing from God, I think God took pity on us,” said another volunteer, Estefanía Riveiro, who is carrying buckets of water to “help our animals.”