An explosion in an apartment building that came under fire from a Russian army tank in Mariupol on Friday. AP

Russian shelling is so intense that, for the last two days, Yuri and 200 other terrified Ukrainian civilians have been trapped in the bunker of the church where they now live in their besieged hometown of Mariupol.

They are running out of food, and since electricity and water supplies have been cut, they are forced to sneak out under heavy fire to draw water from a nearby well.

On Friday, at lunchtime, the bombardment came dangerously close. One shell punched through the roof of the church building, eviscerating the main chapel above ground.

For the first time in two days, the 19-year-old trainee welder, who is with his mother and 11-year-old brother, emerged from below ground to assess the damage, showing videos to The Independent. In the clips, the jagged teeth of wooden beams edge the massive hole in the roof. The pews of the chapel and the altar are wrecked. 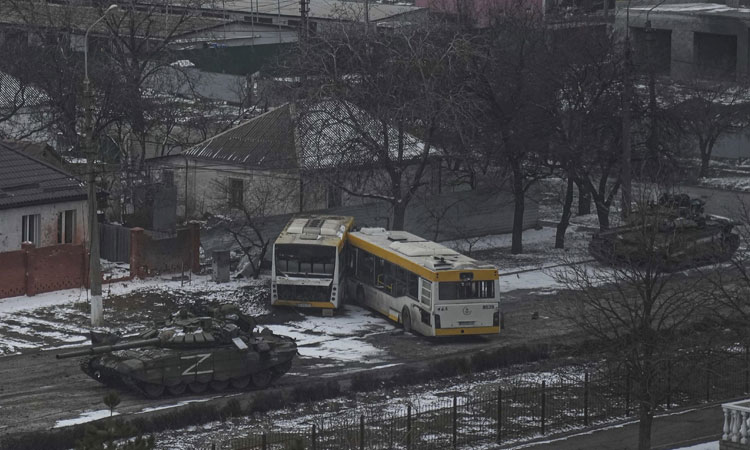 Russian army tanks move down a street on the outskirts of Mariupol. AP

He says it was a miracle none of the families, who are running out of supplies, were seriously injured.

“We are under constant mortar shelling, and one of the shells hit our church. There are 200 of us living here,” he says with desperation, via an encrypted messaging app during a rare spell of connection in the besieged city.

He adds that a second shell hit a house nearby, which is still on fire.

“I can’t go out into the street, because [shrapnel] fragments are flying everywhere and machine gunfire is constant. There is shooting every two minutes.”

The Independent has managed to reach people who are living under intense bombardment in the besieged coastal city, which Ukrainian Red Cross officials say is suffering the worst humanitarian crisis in the entire country.

It is effectively surrounded and there is no way out. Attempts to create humanitarian corridors have failed for five days in a row, aid agencies say. Around 200,000 people are thought still to be stuck without power or water within the city, which is strategically important for the Russians as it lies along the coast and is a gateway to other parts of the country. 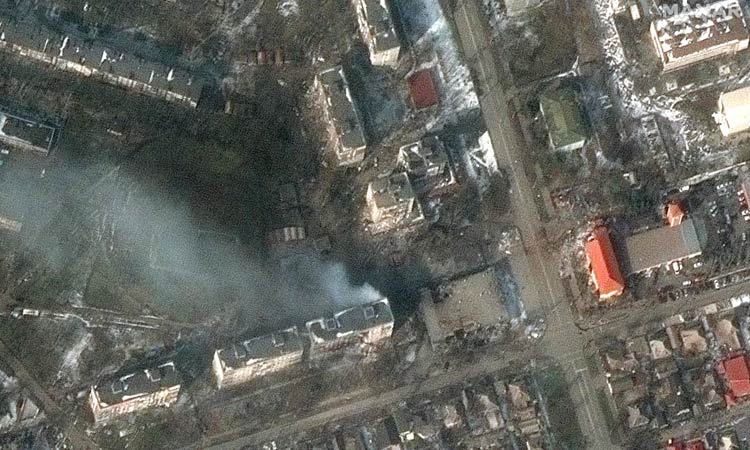 Those inside the city, or displaced residents whose relatives remain trapped inside, paint an apocalyptic picture. In the worst-hit parts, they say that to get water, families are reduced to tapping the now-defunct radiators in their homes, or melting snow.

Under relentless Russian shelling, rockets and gunfire, they are forced to break into shops to scavenge for food. In temperatures that are well below zero, they burn whatever they have in little piles outside their homes to cook and keep warm.

“Yesterday two of my friends were killed, they were travelling with three others in a car that was hit by a shell,” Yuri continues with desperation. “The car exploded and they burned inside it.”

According to the mayor’s office in Mariupol, more than 1,500 residents have been killed in the city in the last two weeks, although The Independent was unable to verify that number.

Mary says her parents told her civilians were reduced to breaking in and looting shops to get supplies. “There is no electricity so people are keeping food outside in the snow. There is no heating, it’s freezing,” she adds.

The mayor himself released a video a few days ago from a bunker, saying that Russia was bombing the city every 30 minutes. He claimed humanitarian corridors were being mined, and shelling was preventing people from leaving.

Aid group Doctors Without Borders have said that some residents are dying for lack of medication, while others killed in the fighting are being buried in makeshift graves by their neighbours.

On Saturday it was reported that Russian forces had shelled a mosque in the city, where some 80 people, including children, were seeking safety. Ukraine’s foreign ministry tweeted: “The mosque of Sultan Suleiman the Magnificent and his wife Roxolana (Hurrem Sultan) in Mariupol was shelled by Russian invaders. 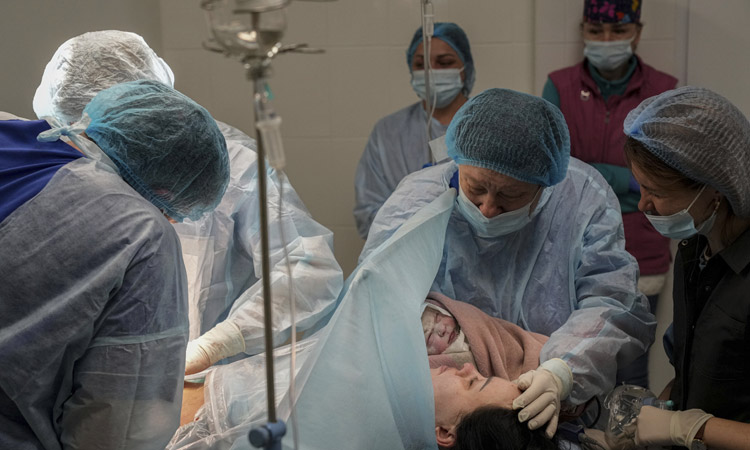 Medical workers hold a newborn girl Alana close to her mother after a Caesarean section at a hospital. AP

“More than 80 adults and children are hiding there from the shelling, including citizens of Turkey.”

A strike on a maternity hospital last week that killed three people sparked international outrage and allegations of war crimes.

Russian officials have repeatedly denied targeting civilian infrastructure, and made several contradictory claims about the hospital, including that it had been taken over by far-right Ukrainian forces to use as a base and that it had been emptied of patients and nurses. They have also denied deliberately striking humanitarian corridors.

But Maksym Dotsenko, head of the Ukrainian Red Cross, told The Independent that all their efforts to evacuate the city had so far failed because of Russia’s bombardment.

“We cannot help those in Mariupol. We have tried to organise evacuation convoys every day but are unsuccessful,” he said.

“They are completely cut off. We cannot even send in a single truck of food.

Ukrainian officials said there was supposed to be another attempt at an evacuation corridor on Saturday, but residents who have fled the city said they had little hope this would happen.

Mary, a 27-year-old IT business analyst, says she escaped with her 16-year-old brother on 3 March after a missile landed in their backyard and the water and heating were cut off. Even then, she tells The Independent, the route was being shelled as they tried to leave. 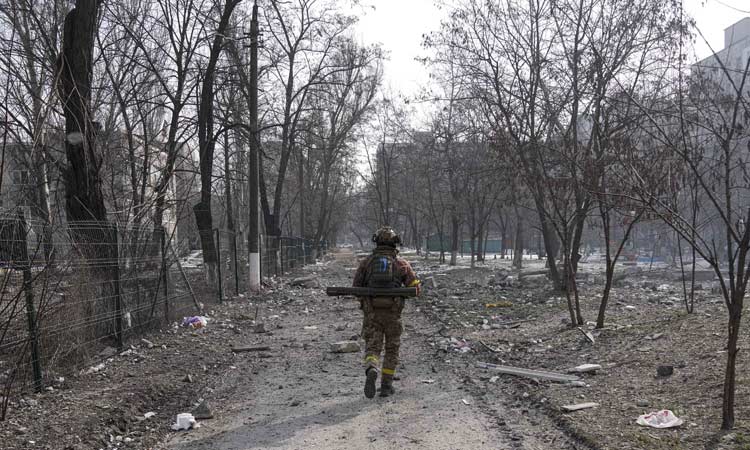 A Ukrainian serviceman walks near the position he was guarding in Mariupol, Ukraine. AP

Her parents, Svetlana, 50, and Sergei, 55, remain trapped in the city. Mary can only speak to them for a minute or two every few days when they get a mobile phone signal.

She last heard from them a few days ago and doesn’t know if they are still alive. She shares the audio of that last conversation. They sound frail and frightened on the line.

“Four times we have tried to leave, and four times the humanitarian corridor was cancelled,” Svetlana says, her voice cracking. “Fighter jets are flying overhead, we hear bombs falling from the aircraft, but we don’t know what areas they are attacking because there is no mobile phone connection.”

“Yesterday two of my friends were killed, they were travelling with three others in a car that was hit by a shell,” Yuri continues with desperation. “The car exploded and they burned inside it.”

The situation is desperate, she continues. “We try to share both cereals [bread] and water. We try to help children. We try to help the elderly. Of course there’s no water, no gas, no heating, no light.”

In the messages she says the eastern side of a river that cuts Mariupol in half is “a humanitarian catastrophe”. It lies closer to Russian forces.

“We can’t get there at all, we don’t know the condition of the river crossing,” she adds.

“People are sitting there without gas, they can’t go out of their basements because they are shooting in the streets. It is very difficult, we need help. Pay attention to Mariupol,” she finishes before bidding her daughter goodbye.

Mary says her parents told her civilians were reduced to breaking in and looting shops to get supplies. “There is no electricity so people are keeping food outside in the snow. There is no heating, it’s freezing,” she adds.

In the central city of Vinnytsia, a key crossroads on the refugee trail, families that have fled Mariupol are now living in the dormitories of a school turned into an informal displacement camp. They rely entirely on humanitarian handouts to survive. Their reports from inside Mariupol echo Mary’s and Yuri’s accounts.

Helena escaped 12 days ago with her son, his wife and her three grandchildren. Relatives who thought the fighting would stop stayed put, and are now missing.

“Twenty people from my extended family are still in the city, we haven’t been able to get through to them for five days,” says Helena, 61, in floods of tears, sitting next to two of her grandchildren on a camp bed.

“Everything is being hit. A missile fell onto a building and a mother and her daughter were trapped under the rubble. We understand the girl died from thirst because there were not enough diggers to get them out in time.”

Back in Mariupol, Yuri sends a video he took from his bunker, where in the pitch black the constant stutter of gunfire sounds in the background. He says everyone at the church is desperate to escape to safety.

“We want to leave, but every time we have tried, heavy shelling has erupted,” he writes before signing off for the night. “And so for now we are stuck here. My only message is that we are grateful to God that everyone has so far survived.”