Smoke from a wind-whipped wildfire rises above neighbourhoods on the outskirts of Flagstaff, Arizona. AP

Heavy winds kicked up a towering wall of flames outside a northern Arizona tourist town Tuesday, ripping through two-dozen structures and sending residents of more than 700 homes scrambling to flee.

A fast-moving wildfire in rural northern Arizona ballooned to over 9 square miles on Tuesday as winds whipped the flames, shut down a major highway and grounded aircraft that could drop water and fire retardant.

Flames as high as 100 feet (30 metres) raced through an area of scattered homes, dry grass and Ponderosa pine trees on the outskirts of Flagstaff as wind gusts of up to 50mph (80kph) pushed the blaze over a major highway. 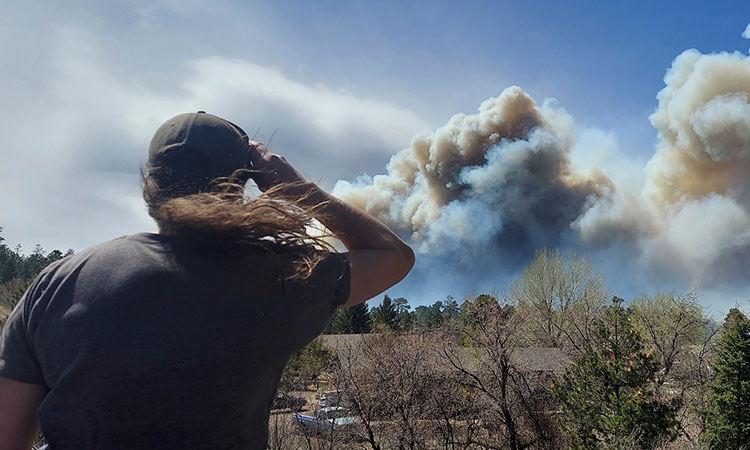 Homes on the outskirts of Flagstaff were being evacuated on Tuesday

Coconino County officials said during an evening news conference that 766 homes and 1,000 animals had been evacuated. About 250 structures remained threatened in the area popular with hikers and off-road vehicle users and where astronauts have trained amid volcanic cinder pits.

About a couple hundred homes along US 89, north of Flagstaff, were evacuated as embers jumped ahead of the main blaze and smoke billowed into the air in an all-too familiar scene. Residents recalled scrambling to pack their bags and flee a dozen years ago during another wildfire that burned for days in the same area.

A top-level fire management team is expected to take over the wildfire later this week.

Fire and law enforcement agencies that were knocking on doors to warn of evacuations Tuesday were forced to pull out to avoid getting trapped by the flames, Paxton said. Arizona Public Service Co. shut off power to about 625 customers to keep firefighters safe, a spokeswoman said.