This photo taken on June 14, 2017 shows flames and smoke coming out from residential block in London. AFP

Survivors and families of the victims of Britain’s worst residential fire since the Second World War will on Tuesday mark the fifth anniversary of the tragedy.

A total of 72 people were killed when a fire that started in a faulty freezer ripped through the 24-storey Grenfell Tower block in west London.

An official report blamed highly combustible cladding fixed to the exterior of the high-rise as the “principal reason” the fire spread.

But despite a costly ongoing public inquiry, the government has been accused of failing to implement urgent safety changes to prevent a similar tragedy in other high-rise blocks.

A day of events includes a memorial service and a 72-second silence after which the names of all of the victims will be read out. 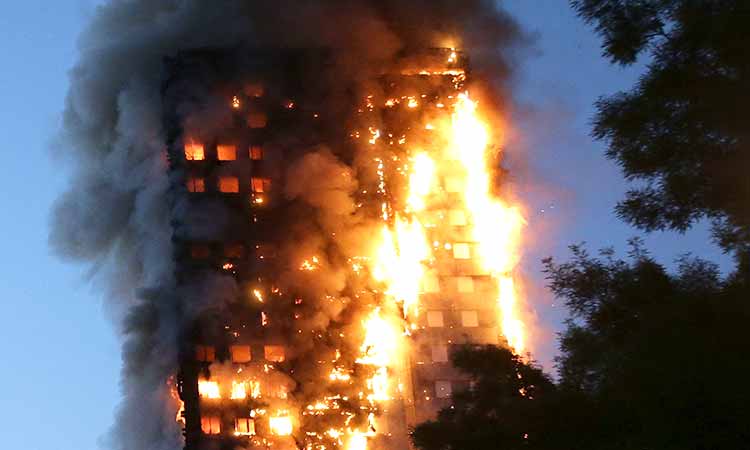 Survivors, the bereaved and community groups will then pay their respects and lay flowers at the foot of the tower, which is still shrouded in tarpaulin.

“This will be a difficult week for everyone affected by the Grenfell Tower fire,” said Natasha Elcock, head of the Grenfell United support group.

“For many of us the events five years ago are still so raw in our minds and our losses remain heavy in our hearts.”

Firefighters from across the country, including those who tackled the blaze, will also form a guard of honour at a silent walk starting from the tower.

The general secretary of the Fire Brigades Union, Matt Wrack, said firefighters and the Grenfell community had a “bond that was forged in tragedy”. 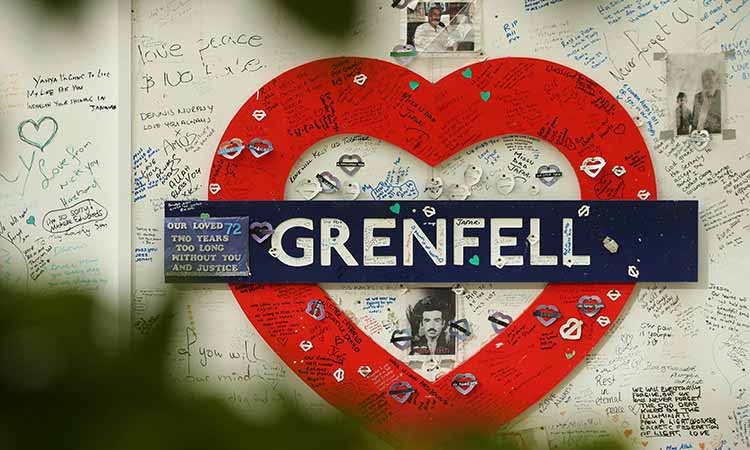 This photo shows the messages of support written on a wall surrounding Grenfell tower in west London. AFP

But he hit out at the government for failing to take fire safety and firefighting seriously, pointing to job cuts across the service since 2017.

“The community have faced constant denials from those responsible for Grenfell being covered in cladding as flammable as petrol,” he said.

“They have faced a wait for criminal charges that continues to this day.”

The FBU has also highlighted “multiple failings” in the testing and approval of cladding, insulation and other material used in the Grenfell Tower.

It claimed that the tragedy could have been averted had the building’s regulator not been privatised and been “dependent on fee income” from manufacturers.

Grenfell campaigners claim that the treatment of survivors — some of whom are yet to be permanently rehoused — has exposed gaping social inequality.

They argue changes would have been implemented sooner had low-income workers and ethnic minority families in social housing not been the ones affected. 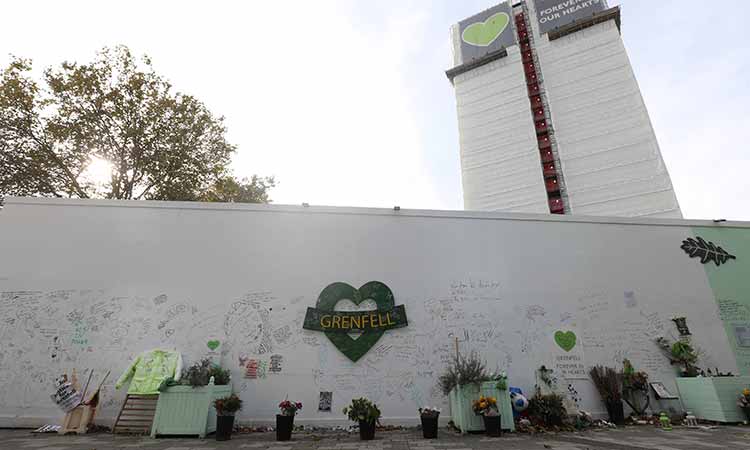 In this file photo taken on October 30, 2019 Grenfell tower is covered in a safety tarpaulin in west London. AFP

There has also been a wider outcry among homeowners who have been forced to pay for the removal of unsafe cladding in the high-rises where they live.

Many have been unable to sell their properties or get proper insurance.

The Times newspaper reported that some 640,000 people were still living in buildings with the same type of cladding material.

There has also been criticism of the government for advising as late as last month that residents should wait for help before evacuating during a high-rise fire.

“I’m gobsmacked at the fact that we’re still having this conversation five years on.”

The ongoing public inquiry was “painstakingly unearthing the truth” — that profits were prioritised over public safety and deregulation weakened building standards, he said.

“The response from the government, building developers and owners has fallen far short of what the families of the victims and survivors have every right to expect,” he wrote in The Observer.

“We still have too many residents in London and across the country living in high-rise buildings that are covered in dangerous flammable cladding, and we are still seeing designs for buildings that have critical safety failings.”