His Highness Sheikh Mohamed Bin Zayed Al Nahyan, Crown Prince of Abu Dhabi and Deputy Supreme Commander of the UAE Armed Forces, and President of Israel, Isaac Herzog, on Sunday deliberated aspects of cooperation under the Abraham Accords Peace Agreement, signed by the two nations in 2020, in addition to a number of regional and international issues of interest.

This came during a session of talks held by Sheikh Mohamed and the President of Israel at Qasr Al Watan Palace in Abu Dhabi.

At the beginning of the meeting, His Highness welcomed Herzog and expressed his hope that this visit would contribute to advancing the relations between the two countries to a higher level for the higher good of their peoples and those of the region. 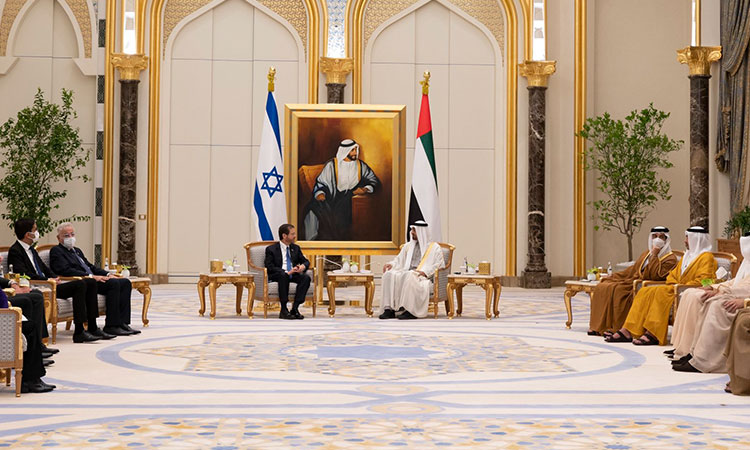 The two sides also reviewed the prospects of growing cooperation at all levels, especially in the economic, trade, investment, development, technology, health, and other fields.

The meeting also dealt with a number of regional and international issues of mutual concern, especially the efforts made to achieve peace, stability and development in the Middle East for the common good and prosperity of its peoples.

Earlier, Sheikh Mohamed Bin Zayed received Isaac Herzog, who is on an official visit to UAE, accompanied by his wife, First lady of Israel Michal Herzog.

An official reception was held for Herzog on his arrival at the Qasr Al Watan, where Sheikh Mohamed escorted him to the podium, and the national anthems of the two countries were played, while 21 rounds of artillery were fired to welcome his visit. 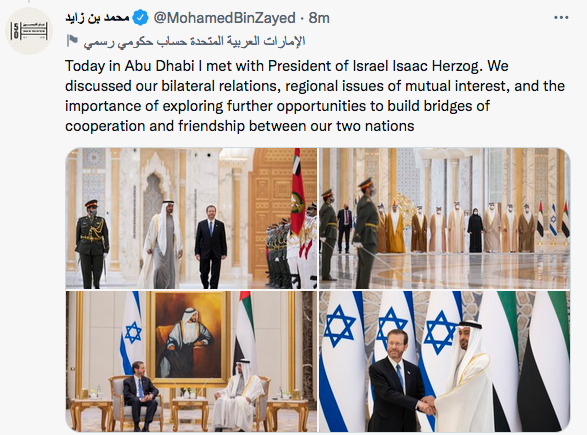 The Israeli president is accompanied by a delegation including a number of senior officials and Ambassador of Israel to UAE, Amir Hayek.

Earlier, Herzog and Michal arrived on an official visit to the UAE. Upon his arrival at the Presidential Flight in Abu Dhabi, he was received by Sheikh Abdullah Bin Zayed Al Nahyan. 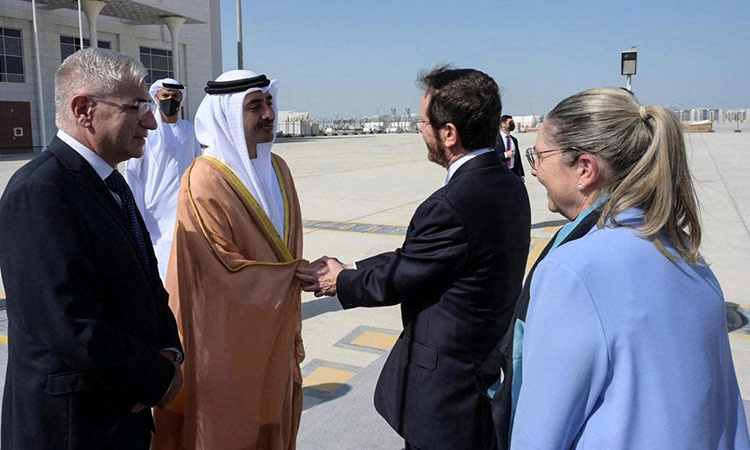 The presidency in Israel is a largely ceremonial post. Prime Minister Naftali Bennett visited the UAE in December. 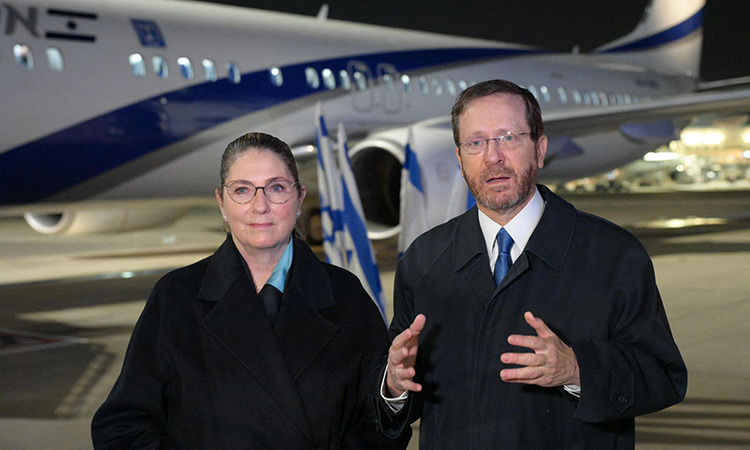 Isaac Herzog addresses the audience at Ben Gurion airport before flying to the UAE on Sunday. AFP

“I will be meeting the leadership of the UAE, at the personal invitation of Sheikh Mohamed Bin Zayed, the Crown Prince,” Herzog said earlier.

“I wish him well and I am grateful for his courage and bold leadership, carving out a peace agreement with Israel and sending a message to the entire region that peace is the only alternative for the peoples of the region.”

President Herzog will also be meeting Jewish communities in the UAE, which is the region’s commercial and tourism hub.