The head of the United Nations’ refugee agency says that more than 1.5 million refugees have crossed from Ukraine into neighboring countries since Russia invaded.

Filippo Grandi, the UN high commissioner for refugees, tweeted on Sunday that it is “the fastest growing refugee crisis in Europe since World War II.”

His agency didn’t immediately give a more precise update on the refugee figures. Grandi is visiting countries that border Ukraine.

Moscow and Kyiv traded blame over a failed ceasefire on Saturday that would have let civilians flee Mariupol and Volnovakha, two southern cities besieged by Russian forces. Ukrainians who could escape spilled into neighbouring Poland, Romania, Slovakia and elsewhere. 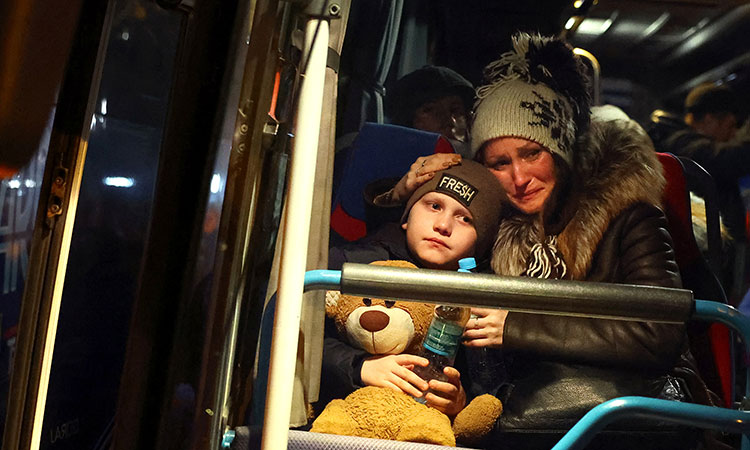 A woman cries as she comforts her son after learning she has to leave a bus in Lviv, Ukraine. Reuters

In Chisinau, the capital of Moldova, hundreds of families took refuge in a sports venue. The refugees milled about or tried to relax on cots while lamenting what they left behind.

Romanian President Klaus Iohannis said no Ukrainian would be denied entry to his country, and he pledged food, clothing, transportation and help with personal documents.

The US is considering a request for $10 billion in emergency funding for humanitarian aid and security needs. 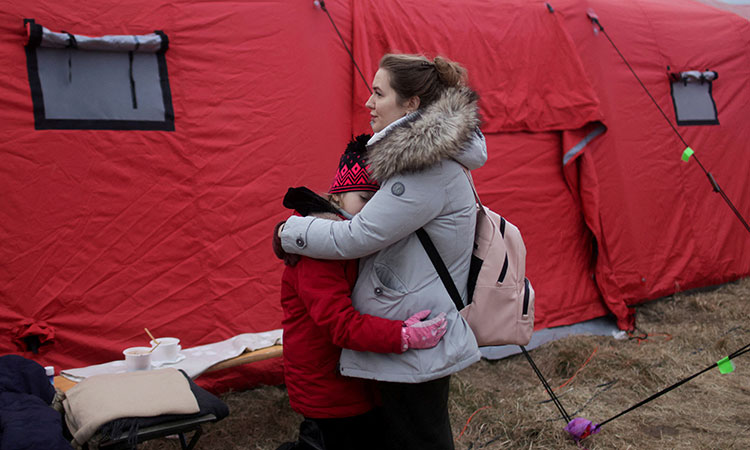 A woman hugs a child as they wait for transport after fleeing the Russian invasion of Ukraine in Slovakia. Reuters

Ukrainian negotiators said a third round of talks with Russia on a ceasefire would go ahead on Monday, although Moscow was less definitive.

In a televised address on Saturday night, Ukraine’s President Volodymyr Zelenskiy called on people in areas occupied by Russian troops to fight.

“We must go outside and drive this evil out of our cities,” he said, vowing to rebuild his nation.

Russian President Vladimir Putin reiterated that he wanted a neutral Ukraine that had been “demilitarised” and “denazified,” and likened Western sanctions “to a declaration of war,” adding: “Thank God it has not come to that.” 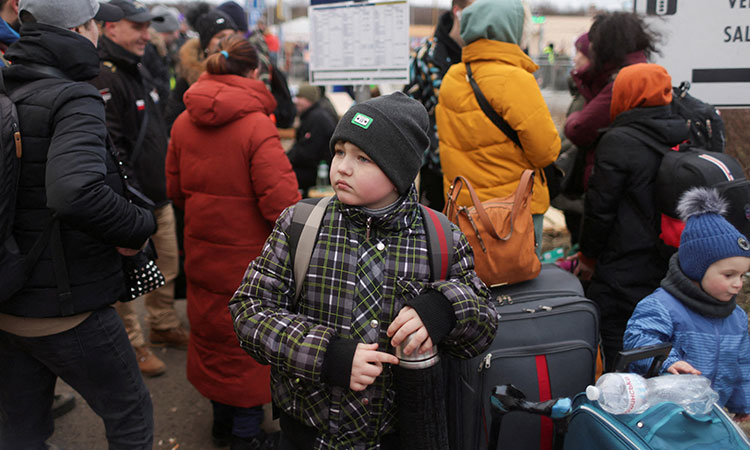 People fleeing from the Russian invasion of Ukraine wait for transport after arriving in Slovakia. Reuters

Ukraine and Western countries have decried Putin’s reasons as a baseless pretext for the invasion and have imposed sweeping sanctions aimed at isolating Moscow and crippling its economy.

Ukraine’s Foreign Minister Dmytro Kuleba, after meeting with US Secretary of State Antony Blinken at the Ukraine-Poland border, said he expected new sanctions and weapons for Ukraine in coming days.

The United States has said it would give Ukraine more weapons and has repeatedly warned it could escalate sanctions, with President Joe Biden seeking $10 billion in emergency funding to respond to the crisis.

Washington is working with Poland as Warsaw considers whether to provide fighter jets to Ukraine, a White House spokesperson said, adding that the United States could replenish Poland’s supply of jets.

Foreign companies managed in UAE to be subject to CT regime