Clutching a mobile phone number of a woman she had never met, Nataliya Ableyeva crossed the border from Ukraine into Hungary, entrusted with a precious cargo. A stranger’s children.

Waiting at the border crossing on the Ukrainian side, Ableyeva had met a desperate 38-year-old man from her home town of Kamianets-Podilskyi, with his young son and daughter.

The border guards would not let him pass. Ukraine has banned all Ukrainian men between the ages of 18 and 60 from leaving, so they can fight for their country. 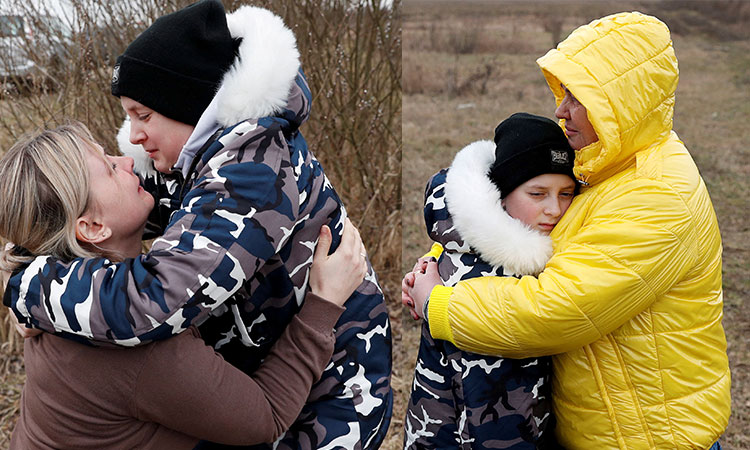 From L to R: Anna Semyuk hugs her son; Nataliya Ableyeva, 58, comforts Semyuk’s son who was handed over to her by his father. Reuters

“Their father simply handed over the two kids to me, and trusted me, giving me their passports to bring them over,” 58-year-old Ableyeva said, the arms of the young boy she had known for just a few hours around her neck.

The children’s Ukrainian mother was on her way from Italy to meet them and take them to safety, the father said. He gave Ableyeva the mother’s mobile number, and said goodbye to his children, wrapped up against the cold in thick jackets and hats.

Ableyeva had left her own two grown-up children behind in Ukraine. One a policeman, the other a nurse, neither could leave Ukraine under the mobilisation decree.

She took the two small children by the hand and together they crossed the border. 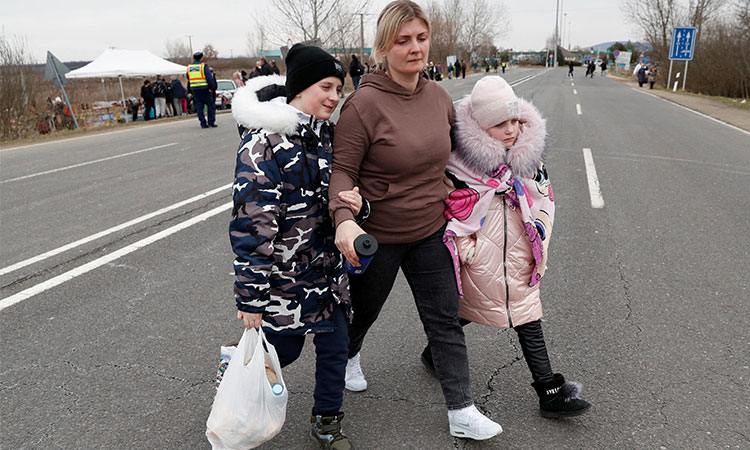 Anna Semyuk walks with her children at the Beregsurany border crossing, Hungary. Reuters

On the Hungarian side at Beregsurany, they waited, sitting on a bench near a tent set up for the steady flow of refugees streaming over the frontier. The little boy was crying when his mobile phone rang. It was his mother, she was nearly at the border post.

When 33-year-old Anna Semyuk arrived, her blonde hair scraped back in a pony tail, she hugged her son and went to her daughter, lying exhausted in the back of a car and wrapped in a pink blanket.

Then she thanked Ableyeva. Standing in the cold on the scrubby ground, two women embraced for several minutes and started to cry.

“All I can say to my kids now, is that everything will be alright,” said Semyuk. “In one or two weeks, and we will go home.”