A court in military-ruled Myanmar convicted the country’s former leader Aung San Suu Kyi of corruption and sentenced her to five years in prison on Wednesday after finding her guilty in the first of 11 corruption cases against her.

The judge in the capital Naypyitaw handed down the verdict within moments of the court convening, said the source, who declined to be identified because the trial is being held behind closed doors, with information restricted. 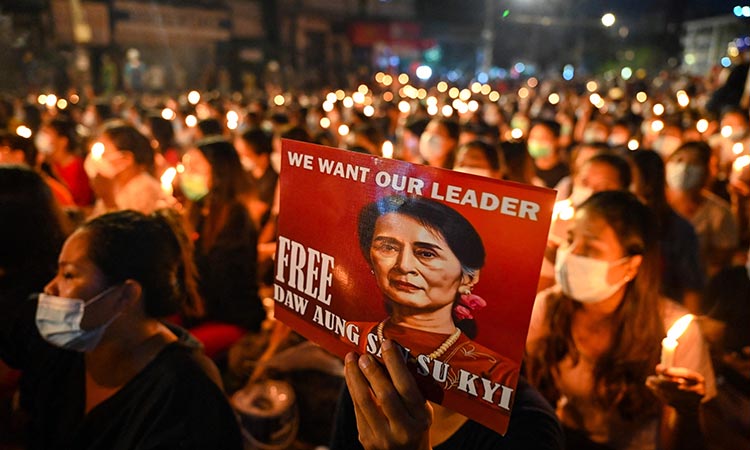 A protester holds a poster of detained civilian leader Aung San Suu Kyi during a candlelight vigil in Yangon. AFP

According to a source with knowledge of proceedings Suu Kyi, who was ousted by an army takeover in February last year, had denied the allegation that she had accepted gold and hundreds of thousands of dollars given her as a bribe by a top political colleague. The maximum punishment for the offense is 15 years in prison and a fine.

Her supporters and independent legal experts have decried her prosecution as unjust and meant to remove the 76-year-old Suu Kyi from politics. She had already been sentenced to six years imprisonment in other cases.

News of the verdict came from a legal official who asked not to be identified because he is not authorized to release information. Suu Kyi’s trial in the capital Naypyitaw was closed to the public, and her lawyers were barred from speaking to media.

Mohamed accepts condolences of Rulers on death of Sheikh Khalifa