Forest fires that broke out over the weekend continue to rage on in various mountains of Khyber Pakhtunkhwa (KP) province, Pakistan, local residents and Rescue officials said on Monday.

Fresh fires erupted in the mountains and forests of Swat Valley, KP, on Monday as authorities claim to have doused over 70 fires in different locations of the district since June 1.

According to district administration officials, an operation was underway to control the fresh inferno, which broke out in the hills of Babuzai, Barikot, Charbagh, Khwazakhela and Kabal tehsils.

Meanwhile, in the hills of Marghuzar — a popular tourist destination in Swat Valley — where a fire broke out on Sunday morning, efforts to put out the inferno have failed and the fire now threatens to spread to nearby areas — Manyar, Gahalegey and Barikot tehsil.

On Saturday, a fire also broke out in the Kala Kot forest area of Swat’s Matta town. 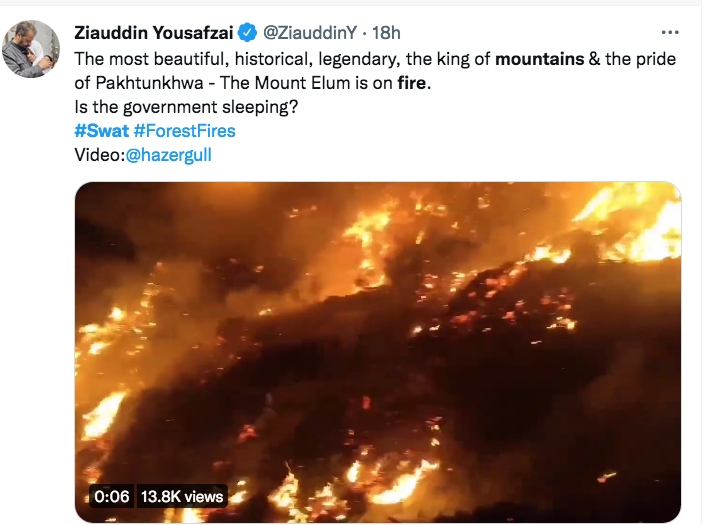 Efforts to put out the blaze were underway throughout the day, according to rescue teams. Several teams of the Levies forces, rescue services and civil defence officials are taking part in fire dousing operations. Last week, four people were killed after a fire erupted in Shangla district. The fire broke out in the houses located on the hills of Shangla and spread rapidly due to the dry weather.

Local residents of Amlokdara village said the fire turned into ashes almost all vegetation on the hills and was now spreading to residential areas.

Hundreds of wildfires have damaged forests spread over thousands of acres in KP for over two weeks. On the other hand, nine people have died from forest blazes in over a week. 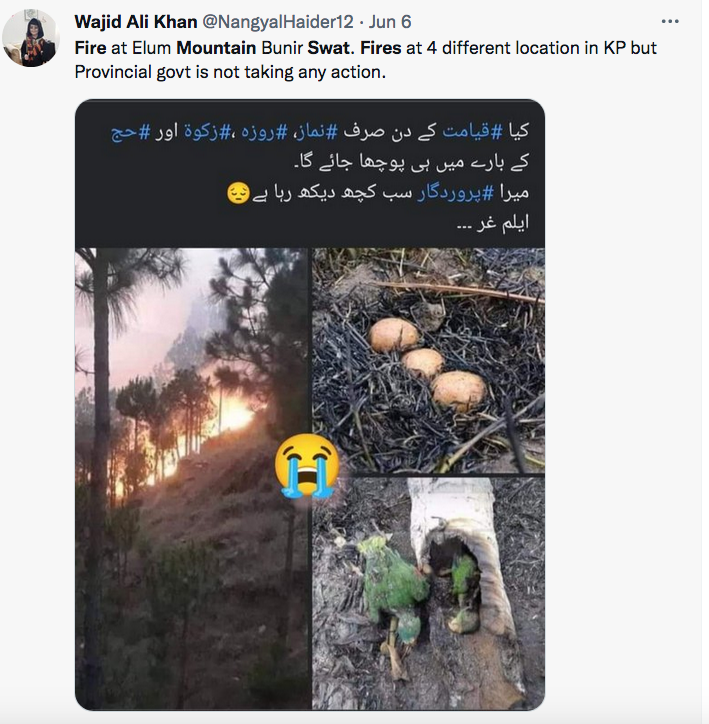 Unfortunately, Khyber Pakhtunkhwa has not been the only province to have witnessed the sudden eruption of fires. Last month, a fire broke out in the pine forests of Balochistan province, which claimed several lives and injured a few people.

The fire that started on May 12 was brought under control but started again on May 20 due to hot and dry weather.Climate change declared as major reason behind unprecedented forest fires.

The Forestry, Environment and Wildlife Department has declared climate change as the major contributor behind unprecedented fire incidents in different forests of KP.

In a detailed report prepared by the department on 210 incidents of forest fires occurring during period from May 23 to June 9, it is observed that rising temperatures, a key indicator of climate change, have caused more evaporation of moisture from the ground, drying out the soil and making vegetation more flammable.

Last week, Prime Minister Shahbaz Sharif issued orders for helicopters to be flown to Swat to help the National Disaster Management Authority put out the wildfires.