A bride searches her COVID-19 vaccination certificate in her mobile phone to show it to a healthcare worker at her wedding venue in Ahmedabad, India. Reuters

India has detected 25 cases of the emergent Omicron variant of the coronavirus and all have shown mild symptoms, the health ministry said on Friday, adding that there was no immediate plan to authorise vaccine boosters.

Vaccine supplies have surged in India in recent months thanks to the Serum Institute of India (SII), which now plans to halve the monthly output of its version of the AstraZeneca vaccine as demand has crashed.

The SII and other Indian drugmakers such as Dr Reddy’s Laboratories, which distributes Russia’s Sputnik vaccine, have lobbied the government to approve booster shots in a bid to lift sales.

Senior health official Vinod Kumar Paul told a news briefing that government experts were studying data on boosters but “our emphatic view…is to (first) cover every adult with (just) the primary two doses.” The government has said this target can be achieved by January. 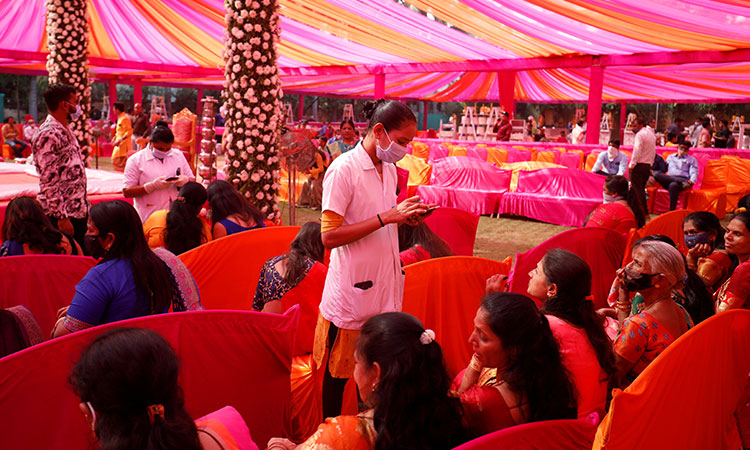 India has not considered authorising booster doses yet as many in the country have been naturally infected and the government believes two vaccine doses offer sufficient protection for now, three informed sources told Reuters late last month.

Around 87% of India’s adults, estimated at 939 million people, have received at least one dose of a vaccine and 54% of them have received the full two. Inoculations for those under the age of 18 years have not started.

Paul spoke after the World Health Organisation recommended that people with compromised immunity or those who received an inactivated vaccine should receive a booster.

Inactivated vaccines, which use killed or inactivated coronavirus to induce immunity, is made by India’s Bharat Biotech and some Chinese companies.

At 144 million doses, Bharat Biotech’s Covaxin accounts for about 11% of the total vaccine doses administered in India. Many Indian healthcare workers received Covaxin early this year and some experts say they should soon be allowed to take a booster.

Most contracted the Delta variant, though Omicron has spread to five states after India’s first two cases were reported on Dec. 2. “All detected cases have mild symptoms,” a health ministry statement said.

On the other hand, the Union Health Ministry on Friday expressed serious concern over the declining trends of mask usage in the country even amid Omicron threat, citing a recently conducted survey which outlined that this has significantly dropped from September onwards.

“Mask usage is declining in India. We have to remember that both vaccines and masks are important. As far as protection capability is concerned, we are now operating at a risky and unacceptable level. We should learn from the global situation,” NITI Aayog’s Member, Health, Dr V.K. Paul said, Member-Health, NITI Aayog.

Meanwhile, India has vaccinated more than half of the adult population in the country with both doses.

Union Health and Family Welfare Minister Mansukh Mandaviya on Friday said in the Lok Sabha that the study on the effectiveness of the vaccines on the new COVID-19 variant Omicron is underway and once the experts give their opinions, a decision on the booster dose will be taken.

No vaccine? No cafe, according to new French virus law