Violence erupts between Israeli forces and Palestinian mourners carrying the coffin of slain Al-Jazeera journalist Shireen Abu Akleh out of a hospital in Jerusalem. AFP

The US and EU led an international outcry on Saturday after Israeli police charged the funeral procession in Jerusalem of Palestinian journalist Shireen Abu Akleh and beat pallbearers who almost dropped her coffin.

Thousands of people packed Jerusalem’s Old City on Friday for the burial of the veteran Al Jazeera journalist, two days after she was killed in an Israeli army raid in the occupied West Bank.

Television footage showed the pallbearers struggling to stop Abu Akleh’s casket from falling to the ground as baton-wielding police officers charged towards them, grabbing Palestinian flags from mourners. 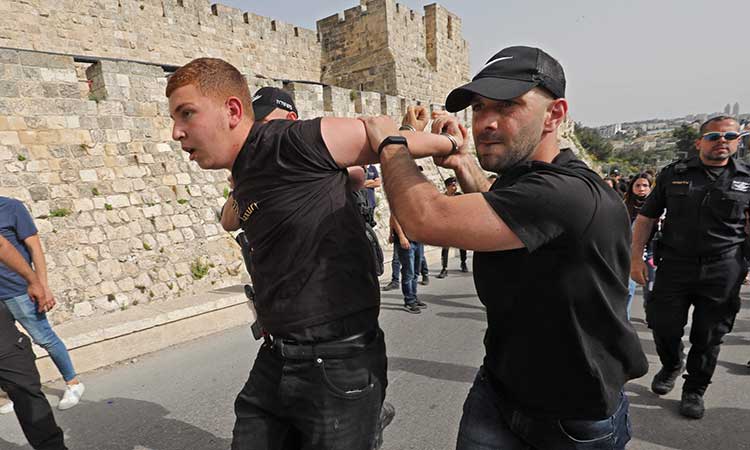 Israeli security forces detain a Palestinian during the funeral of Shireen Abu Akleh in Jerusalem. AFP

The Jerusalem Red Crescent said 33 people were injured, of whom six were hospitalised. Israeli authorities said six arrests were made after mourners had thrown “rocks and glass bottles”.

Israel and the Palestinians traded blame for the death of Abu Akleh on Wednesday who was shot in the head during the Israeli army raid on the Jenin refugee camp.

The Israeli army said an interim investigation could not determine who fired the fatal bullet, noting stray Palestinian gunfire or Israeli sniper fire aimed at militants were both possible causes.

But the Palestinian prosecutor’s office in the West Bank city of Ramallah said later the initial results of an investigation showed “the only origin of the shooting was the Israeli occupation forces”.

Al Jazeera has said Israel killed her “deliberately” and “in cold blood”.

In a rare, unanimous statement, the UN Security Council condemned the killing and called for “an immediate, thorough, transparent, and impartial investigation,” according to diplomats.

The UN Security Council on Friday night strongly condemned the killing of Palestinian-American journalist Shireen Abu Akleh and called for “an immediate, thorough, transparent, and fair and impartial investigation.”

A press statement was approved by the 15 council members after language was removed emphasising the importance of media freedom and the need for journalists working in dangerous areas to be protected at the insistence of China and Russia, diplomats said, speaking on condition of anonymity because discussions were private.