A Ukrainian woman reacts after arriving at the Medyka border crossing in Poland, on Sunday. AP

The UN human rights chief said Monday at least 102 civilians, including seven children, had been killed in Ukraine since Russia invaded five days ago, warning true numbers could be far higher.

Speaking before the UN Human Rights Council, Michelle Bachelet said her office had recorded 406 civilian casualties in Ukraine, including 102 deaths, since Russia began its full-scale attack last on Thursday.

“Most of these civilians were killed by explosive weapons with a wide impact area, including shelling from heavy artillery and multi-launch rocket systems, and airstrikes,” she said, warning “the real figures are, I fear, considerably higher.” 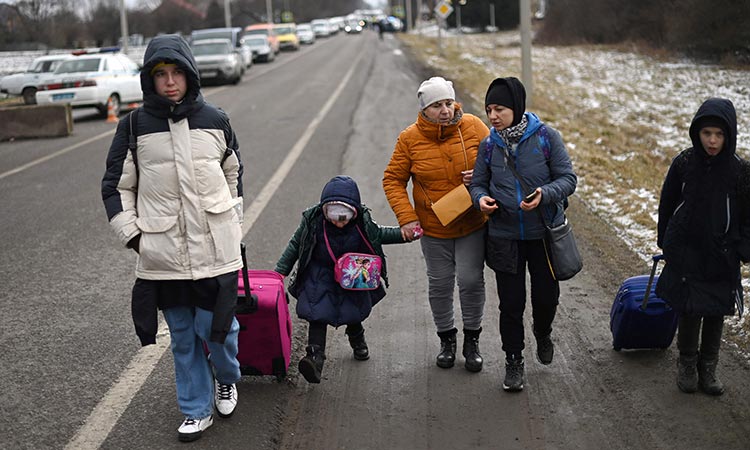 A Ukrainian family walks towards the Medyka-Shehyni border as they flee on Monday. AFP

The UN High Commissioner for Human Rights said the suffering in Ukraine was widespread.

“Millions of civilians, including vulnerable and older people, are forced to huddle in different forms of bomb shelters, such as underground stations, to escape explosions,” she said.

She pointed out that the UN refugee agency has already tallied 368,000 people fleeing the country as refugees, with many more displaced inside Ukraine.

“My thoughts go out to them and to all those across the world who suffer,” she said.

“The calls for peace and human rights that are coming from individuals all over the world warn us that our future must not be a world that has become unmoored from the jointly agreed obligations of international human rights law, and from the Universal Declaration of Human Rights.” 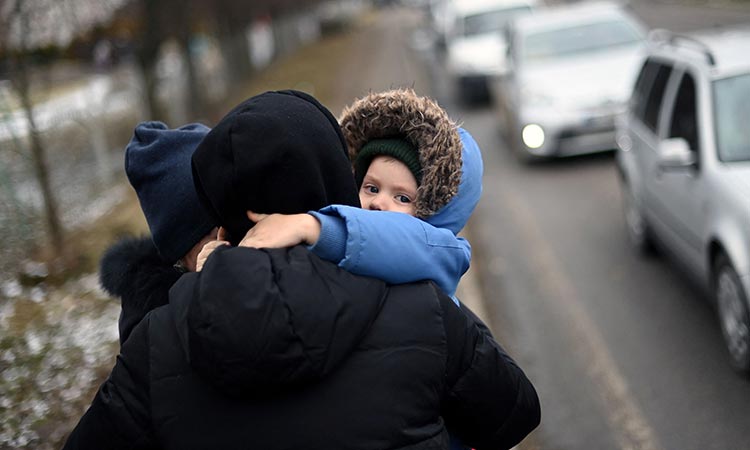 A child hugs his parents on the side of the road on their way to border crossing between Ukraine and Poland. AFP

Bachelet’s comments came at the start of the UN rights council’s main annual session, which began with a vote to host an urgent debate on the Ukraine conflict later this week.

Ukraine, which had requested the debate, is expected to present a resolution calling for an investigation into Moscow’s violations in the country.

Russia had rejected Ukraine’s request for the debate and demanded the issue be put to a vote, but a large majority of the 47 council members supported Kyiv’s request.

“It was an attack not only on Ukraine, it was an attack on every UN member state, on the United Nations and on the principles that this organisation was created to defend,” she said.

She said over 350 people had been killed in the five days since the invasion began, including 16 children.