Dozens of rescuers using two helicopters had to extract the 99 students aged 12 to 14 and eight teachers. AFP

More than 100 German school children and teachers had to be rescued, most of them airlifted to safety, after getting stuck on an Alpine hiking trail, described online as a “classic after-work tour,” police said on Wednesday.

Police in the western state of Vorarlberg said more than 60 rescuers — including the local mayor — took part in the rescue late on Tuesday.

Dozens of rescuers using two helicopters had to extract the 99 students aged 12 to 14 and eight teachers after the path they were on became increasingly difficult and it started to rain, they said.

Due to slippery conditions and the fact that “not all students were wearing optimal footwear” one teacher decided to turn back. After two students slipped and suffered minor injuries, the teacher dialed emergency services, prompting the rescue operation.

“Several students were exhausted, chilled, wet and completely distraught,” the statement said, adding that a crisis intervention team was brought in to help. 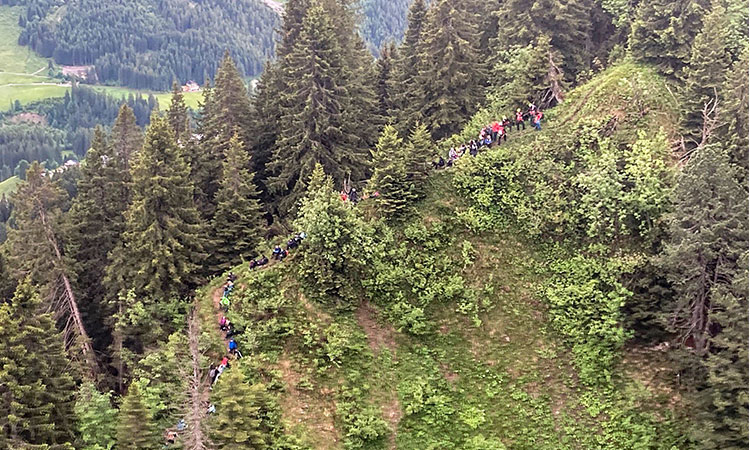 German students and teachers after they got stuck on an Alpine hiking trail. AFP

Two pupils within the group, from the southwestern German city of Ludwigshafen, had slipped, suffering minor injuries, and some were panicking, a police statement said. The teachers alerted the emergency services.

Police said the group had checked online and had believed the trail in Vorarlberg state in western Austria would be easier than it turned out to be.

“Due to a query in an internet search engine, the teaching staff decided on a route that was no longer signposted,” police said in the statement.

The challenging route was “described on the internet as a classic after-work tour,” it added.

“The path is no longer in official tour guides… it was relatively difficult and exposed,” state police spokesman Wolfgang Duer said. “The unusual part was the amount of people having to be rescued.”