The Kurdish-led Syrian Democratic Forces gather around a body of Daesh gunman in Hassakeh, Syria. AP

More than 330 people have been killed in heavy fighting since Daesh group militants first attacked a prison in northeast Syria, a war monitor said on Sunday.

The Daesh fighters on January 20 launched their biggest assault in years on the Ghwayran prison in the Kurdish-controlled city of Hasakeh, aiming to free fellow militants, and dozens remained holed up inside on Sunday.

The death toll in fierce clashes since then rose to 332 as the US-backed Syrian Democratic Forces (SDF) found over 50 more bodies overnight in prison buildings and nearby areas, the Syrian Observatory for Human Rights said.

Israeli President Herzog visits the UAE for the first time

The Britain-based group, which relies on a network of sources inside Syria, said that 246 militants, 79 Kurdish fighters and seven civilian had been killed so far in the Daesh assault and battles since.

“The newly discovered bodies were inside and outside the prison,” Rami Abdel Rahman, who heads the Observatory, told the media. 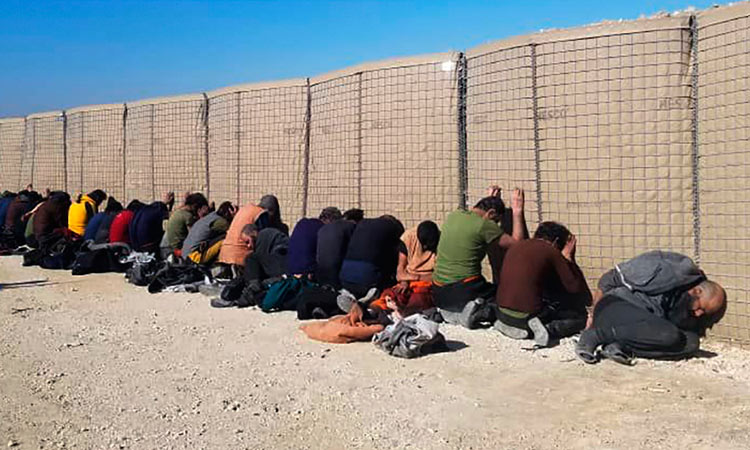 This photo shows some Daesh group fighters after they attacked Gweiran Prison in Hassakeh, Syria. AP

He said the death toll was likely to rise further “because there are dozens of people who are wounded, others who are still missing, and information about more casualties” on both sides.

The SDF announced they had recaptured the prison on Wednesday but intermittent clashes continued until Saturday between Kurdish fighters and jihadists near the jail.

On Saturday, an AFP correspondent saw a truck carrying away piles of bodies from an area near the prison, believed to be those of Daesh fighters. A bulldozer dumped more bodies onto the truck, which then headed to an unknown location.

Farhad Shami, who heads the SDF’s media office, told AFP that the bodies would be buried in “remote, dedicated areas” under SDF control.

According to the SDF, around 3,500 inmates and Daesh attackers had surrendered to its forces since operations began to recapture the prison.

But Kurdish officials estimated that between 60 and 90 Daesh fighters were still holed up in the prison basement and ground floor.

Kurdish forces have repeatedly called for all Daesh fighters to surrender, while the Observatory said that around 20 of them had turned themselves in on Saturday.