All roads leading into Pakistan’s capital Islamabad were blocked on Wednesday ahead of a major protest planned by ousted prime minister Imran Khan and his supporters.

Since being removed from power through a no-confidence vote last month, Khan has heaped pressure on the country’s fragile new coalition government by staging mass rallies across the country.

The international cricket star-turned-politician plans on Wednesday to lead tens of thousands of people from his power base in the northwestern city of Peshawar to the capital demanding fresh elections — in a centre-piece showdown with his rivals.

The coalition government headed by Prime Minister Shehbaz Sharif has pledged to stop Khan’s supporters from pouring into the city, calling the rally an attempt to “divide the nation and promote chaos”. 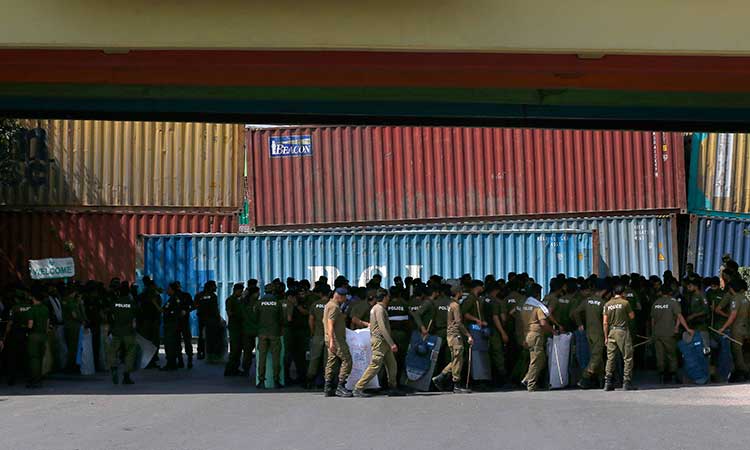 “Nobody should be allowed to besiege the capital and dictate his terms,” interior minister Rana Sanaullah said on Tuesday.

Entry and exit points on key highways that lead to the capital were blocked by police around the nearest main cities of Peshawar, Lahore, and Multan.

Islamabad police on Wednesday published a traffic plan showing a complete blockade of the city and a heavy security presence.

On Tuesday, Khan’s Pakistan Tehreek-e-Insaf (PTI) accused police of arresting and detaining hundreds of its supporters in overnight raids.

Police sources in Lahore who asked not to be named told AFP more than 200 supporters were detained on public order offences. 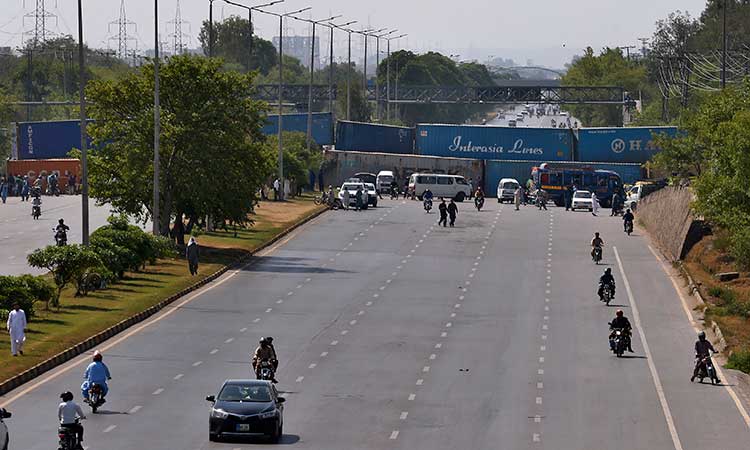 Shipping containers placed by authorities block a road in an attempt to foil a planned rally, in Islamabad. AP

The government and police have said that protestors had been planning to join the march with weapons.

But a defiant Khan told reporters in Peshawar he would lead the largest march in Pakistan’s history.

“I don’t consider it politics but jihad,” Khan said, referring to a term used by Muslims to describe a struggle.

In 2018, Khan was voted in by an electorate weary of the dynastic politics of the country’s two major parties.

The popular former sports star — who enjoyed the backing of the country’s powerful military — had promised to sweep away decades of entrenched corruption and cronyism but is believed to have fallen out with Pakistan’s generals.

He was brought down in part by his failure to rectify the country’s dire economic situation, including its crippling debt, shrinking foreign currency reserves and soaring inflation.