Pakistan’s famous cricketer also known as ‘Rawalpindi Express’ in cricketing world for his fearsome pace bowling will be performing Hajj this year as a state guest of Saudi Arabia.

The pacer announced this news on his social media platforms and posted his pictures wearing Ihram (the two-piece seamless cloth).

He will also be addressing the Hajj Conference attended by leaders of Muslim world in Makkah.

“Alhamdolillah going for honorary Hajj as state guest of Saudi Arabia.  I will also be addressing the Hajj Conference attended by leaders of the Muslim world in Makkah. 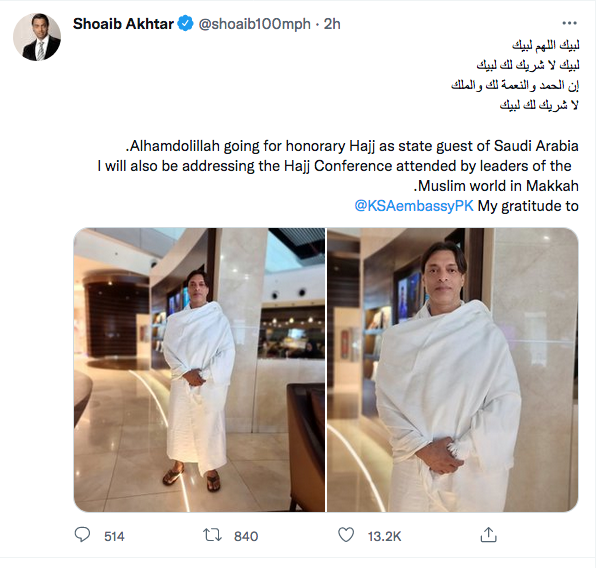 In another post he said “beginning this Holy journey with @tahasadaqat . Will InshAllah pray a lot for our beloved country Pakistan which is going through a really tough time.”

“Once again, special thanks to Government of Saudi Arabia for inviting us for this journey with so much love & regard.”

Shoaib Akhtar who was born on Aug.13, 1975, is a Pakistani former cricketer and commentator. Nicknamed the “Rawalpindi Express,” he was the first bowler to be recorded bowling at 100 miles per hour, a feat he achieved twice in his career.

Akhtar made his Test match debut in November 1997 as an opening fast bowler and played his first One Day International three months later. Akhtar retired from international cricket after the 2011 World Cup.

Post retirement, he began a YouTube career by starting his own channel, where he gives reviews on matches and Pakistan cricket.