President His Highness Sheikh Mohamed Bin Zayed Al Nahyan urged the international community to unite under the principles of peace, stability and collaboration, amid current geopolitical conditions and its ensuing impacts on the global economy, energy and food security and resource scarcity, to pave the way for long-term sustainable economic and social development at the Leaders Meeting of the Major Economies Forum on Energy and Climate (MEF).

At the MEF leader-level meeting hosted by US President Joe Biden, Sheikh Mohamed Bin Zayed joined heads of state from 17 major economies — accounting for 80 per cent of global GDP, population and greenhouse gas emissions — to represent the UAE as the host country of the 28th UN Climate Change Conference (COP28).

In an address to global leaders, Sheikh Mohamed Bin Zayed acknowledged that climate change is an issue of grave importance and must be addressed through collective cooperation, because if left unabated, the impacts of climate change will come at a great cost to people, the planet and the global economy. 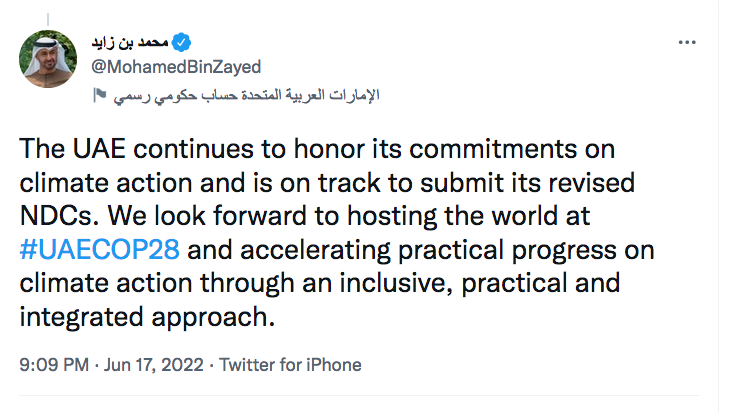 Sheikh Mohamed Bin Zayed emphasised that the UAE has long held the view that climate action is an opportunity to achieve new pathways for economic and social development, with a focus on practical solutions that can benefit all countries. His Highness emphasised that the UAE, as an active partner of the global community, is determined to deliver a COP28 in 2023 that rises to the challenge, by adopting an integrated and inclusive approach that ensures the concerns and needs of all stakeholders are heard.

The UAE is doubling down on efforts to address climate change and accelerate the global energy transition, added His Highness, who pointed to the UAE’s investment of more than $50 billion in renewable energy projects across 40 countries, and plans to invest an additional $50 billion over the next decade.

His Highness also confirmed that the UAE is committed to achieving a safe emissions trajectory and will submit an updated nationally determined contribution (NDC) within the agreed timeframe.

“His Highness’s statement highlighted the UAE’s longstanding history of and ongoing commitment to climate action, driven by the principles established by our founding father Sheikh Zayed,” he said.

Dr Al Jaber added, “For more than  fifteen years, the UAE has demonstrated a proven track record in progressive climate action and multilateral cooperation, as well as played a leading role in investing in renewable energy both domestically and internationally which have led to the UAE’s selection as host country of COP28 in 2023.”

During the MEF meeting, US President Biden urged leaders to maintain climate action as a top priority on the global agenda, against the backdrop of geopolitical instability and its repercussions on energy and food security.

As the first country in the region to sign and ratify the Paris Agreement, the first in the region to commit to an economy-wide reduction in emissions and announce a net zero by 2050 strategic initiative, the UAE has demonstrated a proven track record in progressive climate action, climate diplomacy and multilateral cooperation which led to it being selected as the host country for COP28 in 2023.

The UAE has also emerged as a regional leader in renewable and clean energy investments both domestically and internationally, as the first in the region to start up a nuclear plant to deploy emissions-free, peaceful energy, and home to three of the largest and lowest cost solar plants in the world.