A view of the Sphinx.

The Great Sphinx stole the spotlight during the past two days, in light of rumours that spread like wildfire on social media, which indicated that the legendary statue guarding the three pyramids in Egypt suddenly closed its eyes.

One of the activists had published a picture of the Sphinx, in which he claimed that it “closed its eyes,” and said that this phenomenon indicates that a major event will occur in Egypt in the near future, according to him.

The Egyptian archeology experts denied these rumors, and said that there is no basis..

An informed source in the Ministry of Antiquities confirmed that the pictures taken of the Sphinx were fake, and had been manipulated through the Photoshop programme. 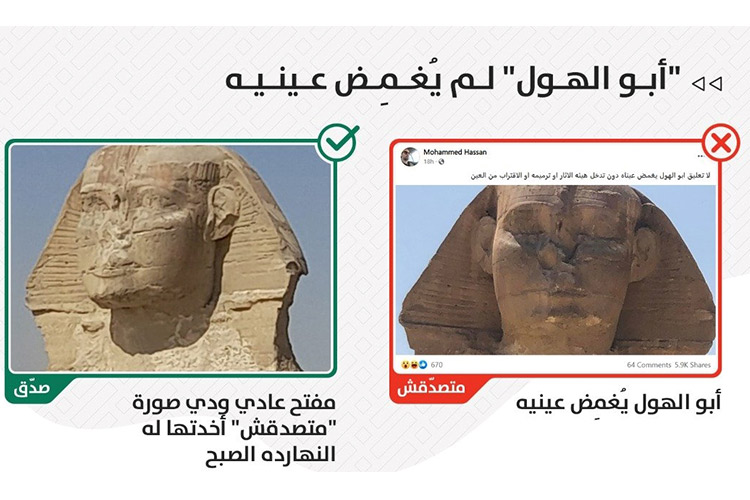 Tourism Egypt said on Facebook, “A very widely spread post with pictures (5400 shares), are not true. The Sphinx did not close its eyes, and the images circulated are likely to be taken from indirect angles, which showed the statue with closed eyes, or modified with one of the image-editing programs. Pictures taken by many this morning, Sunday, May 15, 2022, showed the “Sphinx” with opened eyes, in contrast to the published pictures of it.

Sources at the Ministry of Tourism and Antiquities denied several Egyptian news websites the circulating news, and suggested that the photos were modified by one of the photo-editing programs.“

Despite official denials by Egyptian officials, the archaeological area in Giza Governorate, which includes the three pyramids and the Great Sphinx, witnessed a great turnout of Egyptian citizens and foreign tourists, to learn about the fact that the Sphinx “sleep” rumor. 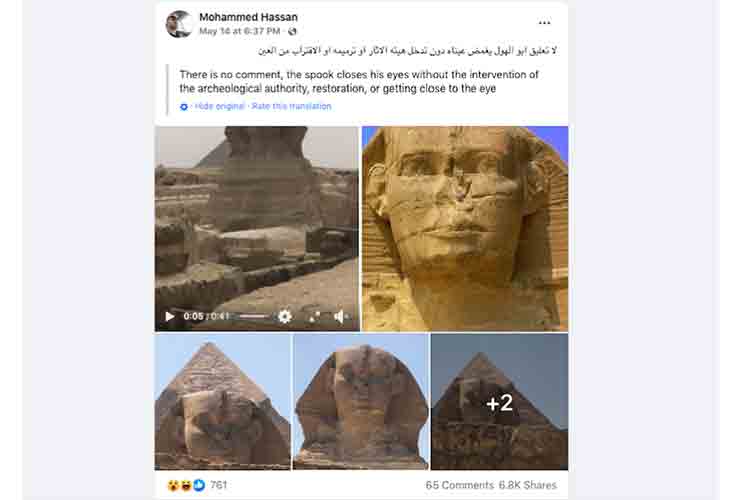 The Egyptian Ministry of Antiquities accused those responsible for these rumors of trying to create confusion by promoting fabricated images.

Opinions differed about the benefits or harms of the rumor that haunted the Great Sphinx during the past two days, with some asserting that it was a rumor that had a good impact on the high demand for visiting the statue and promoting Egyptian antiquities, while others argued that manipulating history and antiquities cannot be tolerated.

The rumor of the Sphinx’s “sleep” has become a source of humor for activists on various social networking sites, especially Twitter and Facebook.