The car, believed to carry the body of Shinzo Abe (inset), passes by policemen and media outside the Nara Medical University Hospital in Kashihara on Saturday. AFP

Police acknowledged security flaws on Saturday in the Japanese city of Nara where former prime minister Shinzo Abe was assassinated, as a motorcade carrying his body arrived at his home in the capital Tokyo.

Mourners gathered at his residence and at the scene of Friday’s tragedy in the western city of Nara, where Japan’s longest-serving modern leader was gunned down in a rare act of political violence while making a campaign speech.

Police arrested a 41-year-old man immediately after Abe was shot at close range with a homemade gun.

The local police force manning the campaign event said on Saturday that there had been shortcomings in the security arrangements.

“We can’t deny that there were problems with the security plan given how things ended,” Nara prefectural police chief Tomoaki Onizuka told a news conference.

“I feel a grave sense of responsibility,” he said, adding that police would analyse what exactly went wrong and implement any necessary changes. 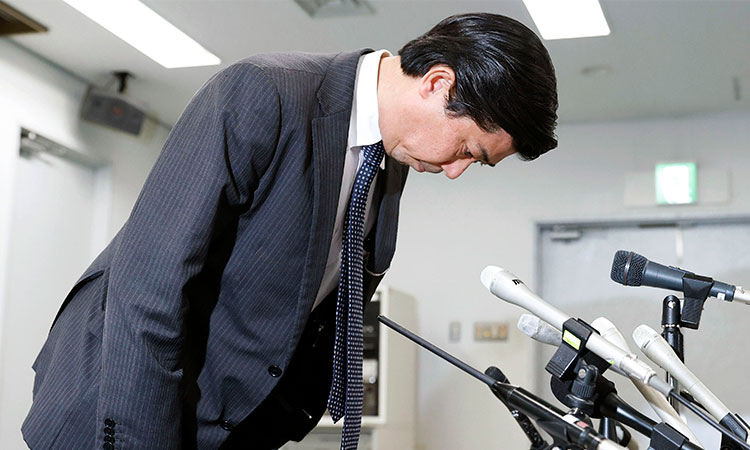 Dignitaries in Japan often travel with modest security details focused mainly on direct physical threats rather than by heavily armed personnel braced for firearms attacks seen in places such as the United States.

On Friday, Nippon Television quoted Nara police as saying Abe was protected at the rally by one armed specialised police officer and some other local officers. Nara police declined to say how many police officers were handling Abe’s security.

Elections for seats in Japan’s upper house of parliament are going ahead as scheduled on Sunday, with the vote expected to deliver victory to the ruling coalition led by Prime Minister Fumio Kishida, an Abe protege.

Kishida was back on the campaign trail visiting regional constituencies after making an emergency return to Tokyo on Friday after the shooting.

A metal detection scanner, not normally seen at election events in largely crime-free Japan, was installed at a site in the city of Fujiyoshida where Kishida was due to give a campaign speech. There was also a heavy police presence.

In Nara, some 450km southwest of Tokyo, a stream of people queued up to lay flowers on a table beside a photograph of Abe.

“I’m just shocked that this kind of thing happened in Nara,” said Natsumi Niwa, a 50-year-old housewife, after laying flowers with her 10-year-old son near the scene of the killing outside a downtown train station.

Niwa said Abe, a conservative and architect of the “Abenomics” policies aimed at reflating the economy, had inspired the name of her son, Masakuni. Abe used to hail Japan as a “beautiful nation.” “Kuni” means nation in Japanese.

A night vigil is due to be held on Monday. Abe’s funeral will take place on Tuesday, attended by close friends, media said.

There was no immediate word on any public memorial service.

Police were scrambling to piece together details of the suspect’s motive and his preparations for the crime.

The suspect believed the former Japanese leader was linked to a religious group he blamed for his mother’s financial ruin, police told local media on Saturday, without identifying the group.

He spent months plotting the attack, even attending other Abe campaign events, including one a day earlier some 200km away, media reported. Analysts said the gun he used was easy to make from readily available materials such as wood and metal pipes, showing the difficulty in eliminating such threats even in a country where tough laws mean it is rare for citizens to buy or own firearms.

The LDP, where Abe retained considerable influence, had already been expected to gain seats before the assassination.

But he remained a member of parliament and influential leader in the LDP after stepping down for the second time in 2020.