Mohamed Bin Zayed Al Nahyan being briefed about the Mission in Abu Dhabi on Wednesda. WAM

President His Highness Sheikh Mohamed Bin Zayed Al Nahyan has reviewed the details of the Emirates Lunar Mission, which comes in line with the country’s ambitious strategy in exploring outer space.

His Highness affirmed his confidence in the competencies of the UAE youth in leading this national mission which aims to reach new scientific horizons that enhance the country’s leadership in outer space, while receiving the Mission’s team in Qasr Al Bahar in Abu Dhabi.

Sheikh Mohamed Bin Zayed said, “The Emirates Lunar Mission translate our confidence in moving forward in the field of space. It is a great confirmation that the historic achievement of the “Hope Probe” was only the beginning of the UAE journey of space exploration. 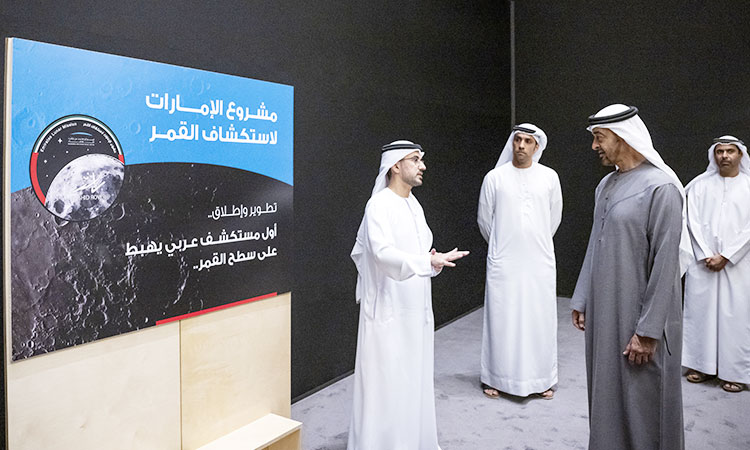 “The UAE through its endeavour to explore the moon, confirms its belief in science as a path to development, enhances its position among the leading countries in space science for the benefit of humanity.”

He praised the UAE national cadres, saying, “They are the main core to achieve all our aspirations and development goals during the coming decades.”

The Emirates Lunar Mission includes the development and launch of the first Arab Rover to land on the lunar surface. It will capture photos and collect information and data from “Mare Frigoris”, particularly “Atlas (crater)” area, which will be explored for the first time.

“Rashid Rover” will be equipped with the latest technologies and innovative devices, and it is distinguished by its ability to resist the lunar surface temperature, which drops as minus as 173˚C.

The mission embodies the aspirations of the UAE in this field, by collecting images and information that allows the country to conduct comprehensive and integrated studies of how to build human settlement on the moon, prepare for future missions to study the red planet, and provide the scientific community with answers about the solar system, and other planets.

Rashid Rover will provide about 10 gigabytes of recorded material, scientific data, and new images, to the global scientific community. It aims to study the Moon’s plasma and to provide answers about the Moon dust, the lunar surface, mobility on the Moon’s surface and how different surfaces interact with lunar particles.

The technical team responsible for the mission will work hard to overcome potential challenges and difficulties, which include the difficulty of landing on the surface of the moon, which may affect the success of the scientific and research process.