Volodymyr Zelenskyy takes a selfie with a wounded soldier during his visit to a hospital in Kyiv on Sunday. AP

Ukrainian President Volodymyr Zelensky visited a hospital to boost the morale of wounded soldiers during Russia’s attacks on Sunday.

On the same day, Zelensky shared a video where he claimed that 13,000 Russian soldiers were killed since Russia’s attack on Ukraine began.

Zelensky said that Russia’s losses in 18 days are more than in the Afghanistan war.

Earlier, Zelensky has said it is a “black day” after Russia shelled a military base in the western part of his country. Zelensky said in his nightly address on Sunday that Russia fired 30 rockets at the Yavoriv military base. He said the attack killed 35 people and injured 134 injured others.

The base is less than 25 kilometres from the Polish border. 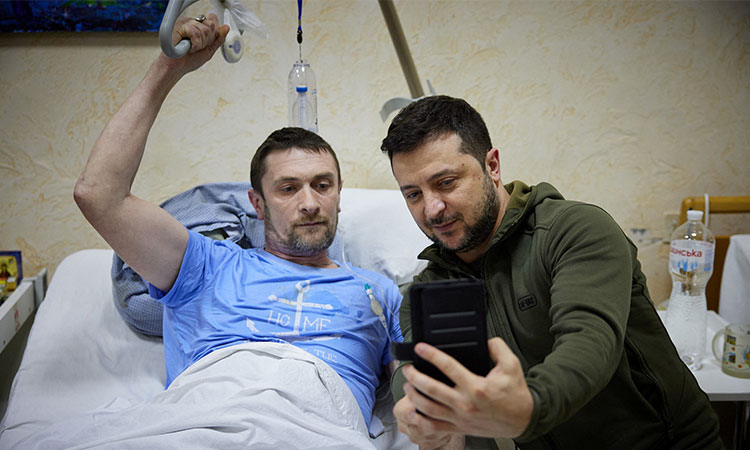 Volodymyr Zelensky takes a picture with a wounded soldier during his visit to a hospital in Kyiv. AP

Zelensky said he had given Western leaders “clear warning” of the danger to the base. He asked Nato leaders again to establish a no-fly zone over Ukraine. He warned “it is only a matter of time” before Russian missiles fall on Nato territory.

Military analysts say the US, Britain and their European allies are unlikely to impose a no-fly zone because they believe it could escalate the war in Ukraine into a nuclear confrontation between Nato and Russia.

And in Russia itself, more than 800 people were detained during anti-war demonstrations.

The Ukraine president — who has maintained an extraordinarily high profile through the conflict — visited wounded soldiers at a hospital outside Kyiv, which was shown in a video released Sunday.

“Feel better, stay strong,” a visibly moved Zelensky told them. “You are doing a great job.”

He referred to his visit during his address early Monday, praising Ukrainian doctors for treating wounded Russians at the same facility.

“Because they are people, not beasts,” he said. “And we have to go through this war so that we all remain human.”

Since Russia launched its war on Ukraine, more than 2.5 million people have fled to other countries.

At least 564 civilians have also been killed and 982 injured in Ukraine, according to UN estimates.