Women refugees look for baby food after they arrived at the border crossing in Medyka, Poland on Sunday.

Russian President Vladimir Putin said on Sunday his campaign in Ukraine was going to plan and would not end until Kyiv stopped fighting, as efforts to evacuate 200,000 people from the heavily bombarded city of Mariupol fell apart for a second day in a row.
Most people trapped in the port city are sleeping in bomb shelters to escape more than six days of near-constant shelling by encircling Russian forces that has cut off food, water, power and heating supplies, according to the Ukrainian authorities.

The civilian death toll from hostilities across Ukraine since Moscow launched its invasion on Feb. 24 stood at 364, including more than 20 children, according to the United Nations on Sunday, with hundreds more injured.

The UN High Commissioner for Human Rights said most civilian casualties were caused by the use of “explosive weapons with a wide impact area, including shelling from heavy artillery and multi-launch rocket systems, and missile and air strikes.”
Moscow has repeatedly denied attacking civilian areas. 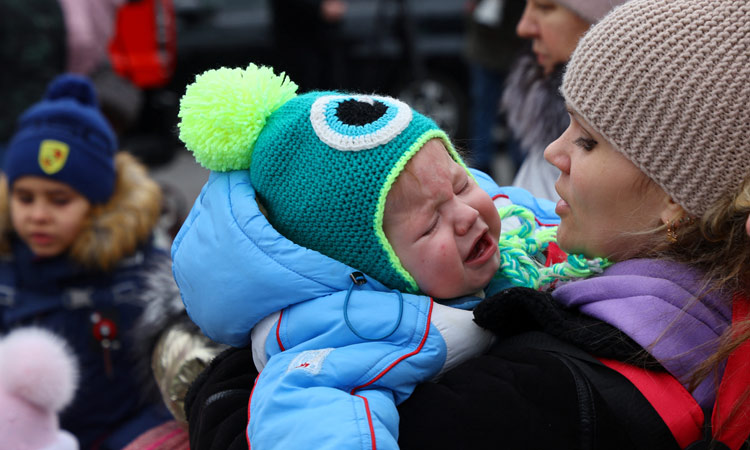 People arrive at a temporary accommodation and transport hub.

In Irpin, a town some 25 kilometres (16 miles) northwest of the capital Kyiv, men, women and children trying to escape armed clashes in the area were forced to take cover when missiles struck nearby, according to Reuters witnesses.

Soldiers and fellow residents helped the elderly hurry to a bus filled with frightened people, some cowering as they waited to be driven to safety.

The invasion has drawn almost universal condemnation around the world, sent more than 1.5 million Ukrainians fleeing from the country, and triggered tough Western sanctions against Russia aimed at squeezing its economy.

Putin made his demand for Kyiv to end the fighting in a phone call with Turkish President Tayyip Erdogan, who appealed for a ceasefire. Putin told Erdogan he was ready for dialogue with Ukraine and foreign partners but any attempt to draw out negotiation would fail, a Kremlin statement said.

Anti-war protests took place around the world on Sunday including in Russia itself, where police detained around 3,500 demonstrators. TASS news agency reported the interior ministry as saying arrests included 1,700 people in Moscow and 750 in St Petersburg.

Thousands of protesters chanted “No to war!” and “Shame on you!”, according to videos posted on social media by opposition activists and bloggers. Reuters was unable to independently verify the footage and photographs on social media.

Demonstrations were also taking place in Western capitals as well as in India and Kazakhstan, after jailed Kremlin critic Alexei Navalny called for worldwide protests against the war.

In the besieged Ukrainian city of Mariupol, authorities had said on Sunday they would make a second attempt to evacuate some of the 400,000 residents. 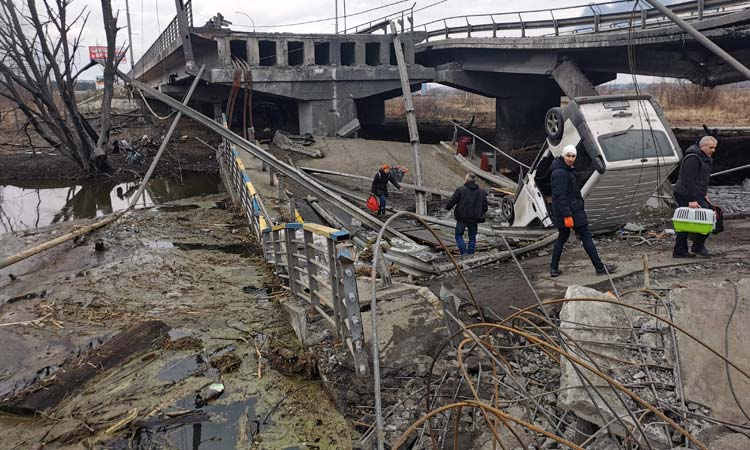 Pedestrians cross a destroyed bridge as they evacuate the city of Irpin, northwest of Kyiv, on March 6, 2022.

But the ceasefire plan collapsed, as it had on Saturday, with each side blaming the other for the failure.

“The failed attempts yesterday and today underscore the absence of a detailed and functioning agreement between the parties to the conflict,” the International Committee of the Red Cross said, adding 200,000 people had been due to quit the city.

“They’re destroying us,” Mariupol mayor Vadym Boychenko told Reuters in a video call, describing the city’s plight before the latest evacuation effort failed. “They will not even give us an opportunity to count the wounded and the killed because the shelling does not stop.”

Moscow calls its campaign a “special military operation”, saying it has no plans to occupy Ukraine.
Russia has poured troops and equipment into Ukraine. A huge Russian convoy on a road north of Kyiv has made limited visible progress in recent days, although Russia’s defence ministry released footage on Sunday showing some tracked military vehicles on the move.
In the capital, Ukrainian soldiers bolstered defences by digging trenches, blocking roads and liaising with civil defence units as Russian forces bombarded areas nearby.

Ukrainian President Volodymyr Zelenskiy said Russian rockets had destroyed the civilian airport of the central-western region capital of Vinnytsia on Sunday. He also said Russia was preparing to bombard another southern city, Odessa.

Residents of some towns occupied by Russian forces took to the streets in protest, Interfax Ukraine reported, including 2,000 in the southern city of Nova Kakhovka.

The World Health Organization said there had been several attacks on Ukrainian healthcare facilities during the conflict. The attacks caused deaths and injuries, WHO chief Tedros Adhanom Ghebreyesus said in a Twitter message, but gave no details.

Kyiv renewed its appeal to the West to toughen sanctions beyond existing efforts. It also requested more weapons, including a plea for Russian-made planes, to help it repel Russian forces.
U.S. Secretary of State Anthony Blinken said Washington was “very, very actively” considering how it could backfill aircraft for Poland, if Warsaw decided to supply its warplanes to Ukraine, speaking on a trip to neighbouring Moldova.
Putin says he wants a “demilitarised”, “denazified” and neutral Ukraine and on Saturday likened Western sanctions “to a declaration of war”.

The West, which calls Putin’s reasons for invading baseless, has expanded effort to rearm Ukraine, sending in items from Stinger missiles to anti-tank weapons.

But Washington and its NATO allies have resisted Ukraine’s appeals for a no-fly zone for fear that it would escalate the conflict beyond Ukraine’s borders.

British military intelligence said on Sunday that Russian forces were attacking populated areas in Ukraine, comparing the tactics to those Russia used in Chechnya in 1999 and Syria in 2016. But it said Ukrainian resistance was slowing the advance.
Ukrainians continued to pour into Poland, Romania, Slovakia and elsewhere. U.N. High Commissioner for Refugees Filippo Grandi said more than 1.5 million people had fled in the fastest growing refugee crisis in Europe since World War Two.

Western sanctions have pushed many companies to exit investments in Russia, while some Russian banks have been shut out of a global financial payment systems, driving down the rouble and forcing Moscow to jack up interest rates.

Ukraine’s military said more than 11,000 Russian troops had been killed so far and 88 Russian aircraft shot down since the start of the invasion. Reuters could not corroborate the claim. Russia has not given regular updates on its death toll.
Reuters