Commuters wearing face masks wait at an intersection in the central business. AP

Shanghai authorities on Tuesday began dismantling fences around housing compounds and ripping police tape off public squares and buildings, to the relief of the city’s 25 million residents, before a painful two-month lockdown is lifted at midnight.

On Monday evening, some of the people allowed out of their compounds for brief walks took advantage of suspended traffic to congregate for a soft-drink and icecream on deserted streets, but there was a sense of wariness and anxiety among residents.

Most will be stuck indoors again until midnight, as they have been for the past two months under a ruthlessly enforced lockdown that has caused income losses, stress and despair to millions struggling to access food or get emergency healthcare.

The prolonged isolation has fuelled public anger and rare protests inside Shanghai and battered the city’s manufacturing and export-heavy economy, disrupting supply chains in China and around the world, and slowing international trade. 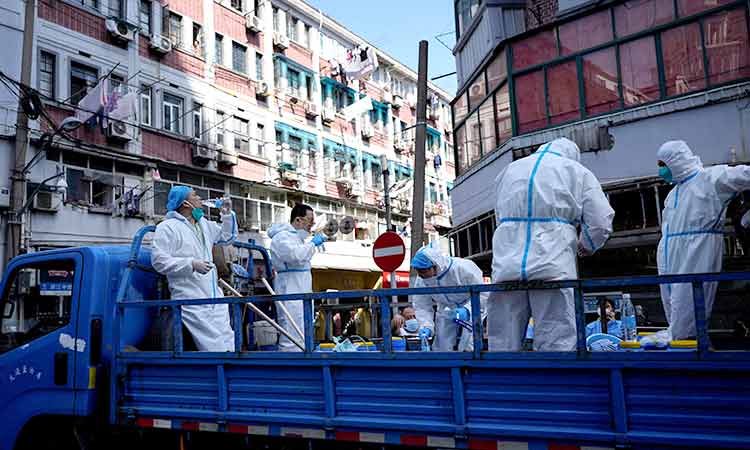 Workers stand on a truck as the city prepares to end the lockdown in Shanghai, China on Tuesday. Reuters

Life is set to return to something more like normal from Wednesday, when the passes issued by residential buildings for people to go out for a few hours will be scrapped, public transport will resume and residents can go back to work.

“Now that I’m going back to work so suddenly, I feel a little nervous,” said resident Joseph Mak, who works in education. “It’s hard to believe it’s actually happening.”

The easing of curbs applies only to those in low-risk areas, or about 22.5 million people. Residents will still have to wear masks and are discouraged from gathering.

Residents will have to get COVID tests every 72 hours to take public transport and enter public venues. Tough quarantine is still in store for anyone testing positive and their close contacts.