A view shows the bodies who Ukrainian officials say were killed during Russia’s invasion outside Kyiv. File/Reuters

Dozens of Ukrainian fighters killed at the Azovstal steelworks have been returned to Ukraine by the Russian occupiers of the fortress-like plant in the destroyed city of Mariupol, where their last-ditch stand became a symbol of resistance against Moscow’s invasion.

The dead taken from the ruins of the bombed-out mill were transferred to the Ukrainian capital, Kyiv, where DNA testing is underway to identify the remains, according to both a military leader and a spokeswoman for the Azov Regiment.

The Azov Regiment was among the Ukrainian units that defended the steelworks for nearly three months before surrendering in May under relentless Russian attacks from the ground, sea and air.

It was unclear how many bodies might remain at the plant. 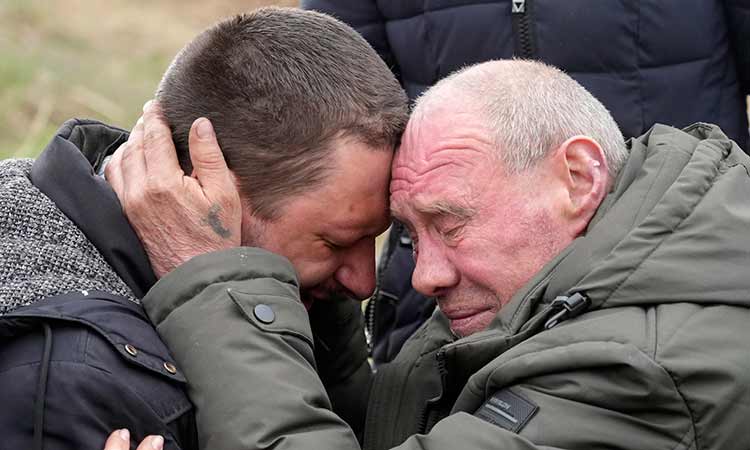 Relatives cry at a funeral on the outskirts of Kyiv, Ukraine. File/AP

Meanwhile, Russian forces continued to fight for control of Sievierodonetsk, an eastern Ukrainian city that is key to Moscow’s goal of completing the capture of the industrial Donbas region.

President Volodymyr Zelensky said Ukrainian forces were holding their positions in the city amid fierce fighting in the streets as Russia tries to deploy more forces.

“But it is the 103rd day, and the Ukrainian Donbas stands. It stands firmly,” he said in his nightly address to the nation.

Zelensky also said Moscow’s forces intend to take the southeastern city of Zaporizhzhia, home to more than 700,000 people, a move that could severely weaken Ukraine’s standing and allow the Russian military to advance closer to the center of the country.

“In the Zaporizhzhia region … there is the most threatening situation there,” Zelenskyy said.