Service members of pro-Russian troops are seen atop a tank on the outskirts of Mariupol. Reuters

Ukraine on Monday rejected Russian calls to surrender the port city of Mariupol, where residents are besieged with little food, water and power in a humanitarian crisis that is increasing pressure on European leaders to toughen sanctions on Moscow.

As it continued its barrage of the besieged city of Mariupol, Russia demanded that Ukrainians put down their arms and raise white flags on Monday in exchange for safe passage out of town.

Ukraine angrily rejected the offer, which came hours after officials said Russian forces had bombed an art school that was sheltering some 400 people.

Ukraine’s government defiantly rejected Russian calls for Ukrainian forces in Mariupol to lay down their arms in exchange for safe passage out of the city and humanitarian corridors to be opened from 1000 Moscow time (0700 GMT) on Monday. 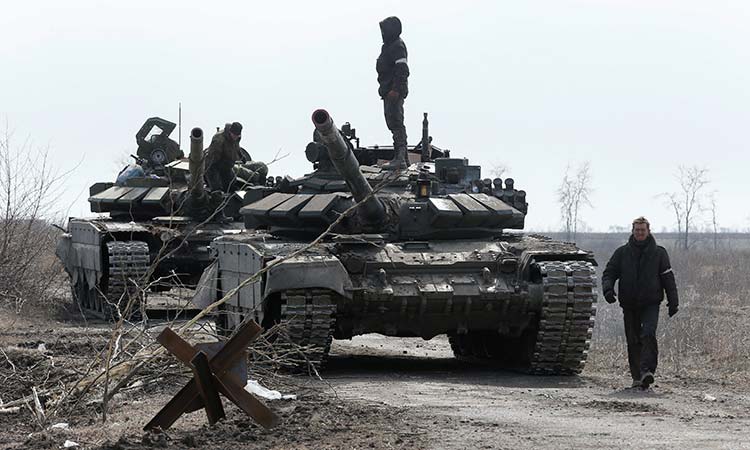 Service members of pro-Russian troops and tanks on the outskirts of the besieged city of Mariupol. Reuters

“There can be no question of any surrender, laying down of arms,” the Ukrainska Pravda news portal cited Ukraine’s Deputy Prime Minister Iryna Vereshchuk as saying.

“We have already informed the Russian side about this.”

While the fight for control of the strategically important city remained intense, Western governments and analysts see the broader conflict shifting to a war of attrition.

Russian Col. Gen. Mikhail Mizintsev said it would allow two corridors out of Mariupol, heading either east toward Russia or west to other parts of Ukraine. 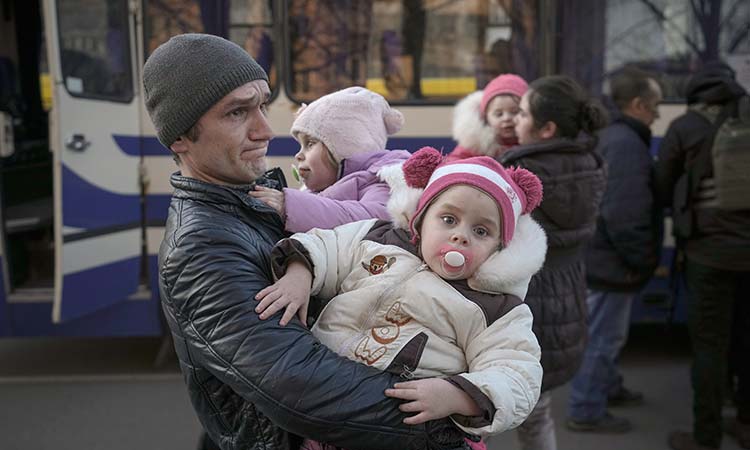 Refugees wait for Ukrainian police to check their papers and belongings in Brovary, Ukraine, on Sunday. AP

Mariupol has suffered some of the heaviest bombardments since Russia invaded Ukraine on Feb. 24. Many of its 400,000 residents remain trapped as fighting rages on the streets around them.

Vereshchuk said over 7,000 people were evacuated from Ukrainian cities through humanitarian corridors on Sunday, more than half from Mariupol. She said the government planned to send nearly 50 buses there on Monday for further evacuations.

Mariupol residents were given until 5am on Monday to respond to the offer. Russia didn’t say what action it would take if it was rejected. 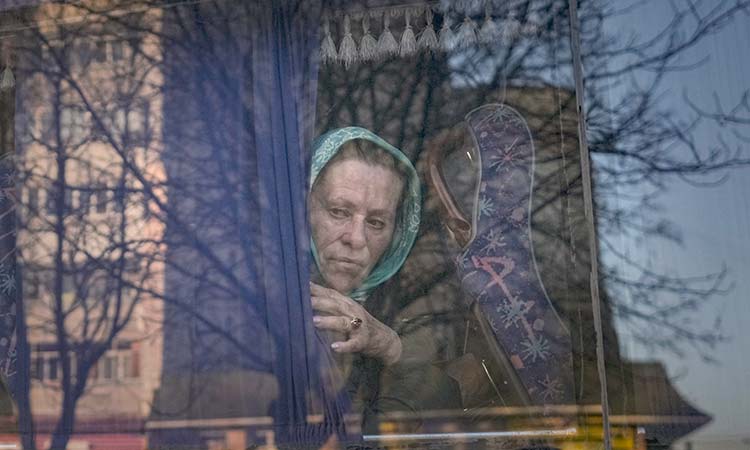 A woman waits on a bus for Ukrainian police to check her papers and belongings in Brovary, Ukraine. AP

“There can be no talk of any surrender, laying down of arms. We have already informed the Russian side about this,” she told the news outlet Ukrainian Pravda. “I wrote: `Instead of wasting time on eight pages of letters, just open the corridor.’”

Mariupol Mayor Piotr Andryushchenko also rejected the offer, saying in a Facebook post he didn’t need to wait until morning to respond, cursing at the Russians, according to the news agency Interfax Ukraine.