Russian forces have blown up a bridge linking the embattled Ukrainian city of Sievierodonetsk to another city across the river, cutting off a possible evacuation route for civilians, local officials said on Sunday.

Sievierodonetsk has become the epicenter of the battle for control over Ukraine’s eastern Donbas region. Parts of the city have been pulverized in some of the bloodiest fighting since the Kremlin unleashed its invasion on Feb. 24.

“The key tactical goal of the occupiers has not changed: they are pressing in Sievierodonetsk, severe fighting is ongoing there – literally for every meter,” Ukrainian President Volodymyr Zelensky said in his nightly video address, adding that Russia’s military was trying to deploy reserve forces to the Donbas.

Zelensky said the image of a 12-year-old injured in a Russian strike was now the enduring worldwide face of Russia. “These very facts will underscore the way in which Russia is seen by the world,” he said. 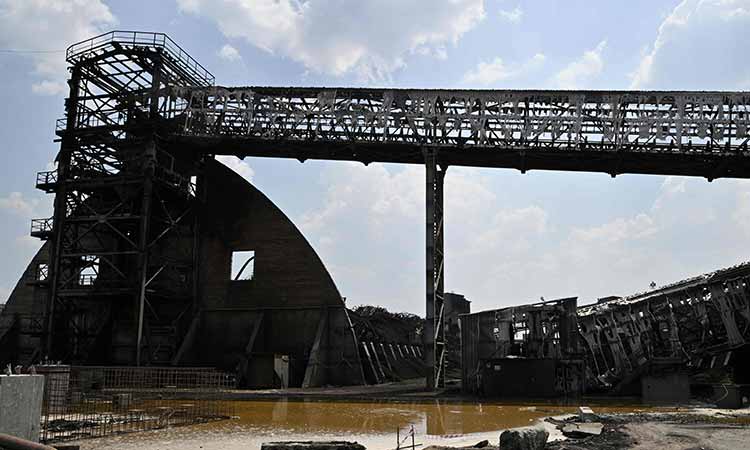 A photograph shows a destroyed storage facilities in the southern city of Mykolaiv on Sunday. AFP

Ukrainian and Russian forces were still fighting street-by-street in Sievierodonetsk on Sunday, the governor of Luhansk province, Serhiy Gaidai, said.

Russian forces have taken most of the city but Ukrainian troops remain in control of an industrial area and the Azot chemical plant where hundreds of civilians are sheltering. “About 500 civilians remain on the territory of the Azot plant in Sievierodonetsk, 40 of them are children. Sometimes the military manages to evacuate someone,” Gaidai said.

But the Russians had destroyed a bridge over the Siverskyi Donets River linking Sievierodonetsk with its twin city of Lysychansk, Gaidai said.

That left just one of three bridges still standing. 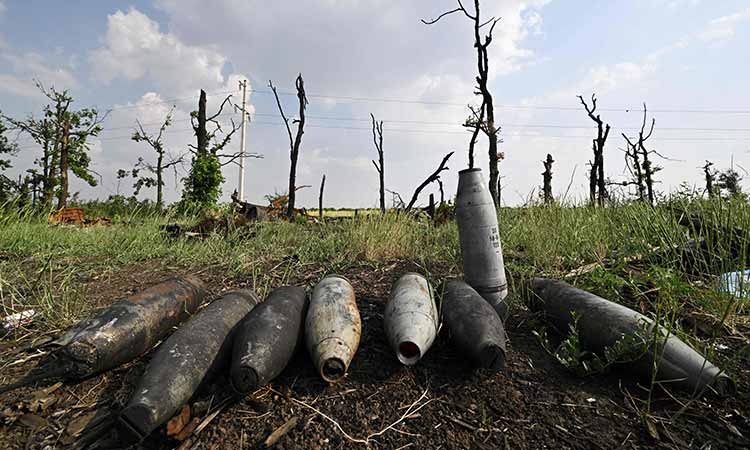 This picture shows artillery shells on the ground next to destroyed Russian military vehicles in Mykolaiv, Ukraine. AFP

“If after new shelling the bridge collapses, the city will truly be cut off. There will be no way of leaving Sievierodonetsk in a vehicle,” Gaidai said, noting the lack of a cease-fire agreement and no agreed evacuation corridors.

After being forced to scale back its initial goals following its Feb. 24 invasion of Ukraine, Moscow has turned its attention to expanding control in the Donbas, where pro-Russian separatists have held territory since 2014. 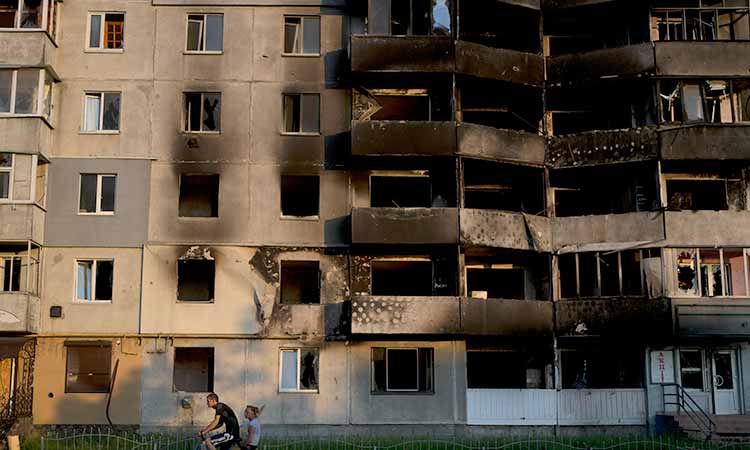 A man rides a bicycle in front of a building destroyed by attacks in Borodyanka, Kyiv, Ukraine, on Sunday. AP

The fall of Sievierodonetsk, in the last pocket of Ukrainian land held in the strategic Luhansk region, would move Russia a big step closer to one of the stated goals of what Putin calls a “special military operation.”

Ternopil’s governor said rockets fired from the Black Sea at the city of Chortkiv had partly destroyed a military facility and injured 22 people. A local official said there were no weapons stored there.

Reuters could not independently confirm the differing accounts.