This photo shows the destroyed shopping centre in Odesa, Ukraine, on Tuesday. Reuters

Russia pummeled the vital port of Odesa, Ukrainian officials said on Tuesday, in an apparent effort to disrupt supply lines and Western weapons shipments as Ukraine’s foreign minister appeared to suggest the country could expand its war aims.

With the war now in its 11th week and Kyiv bogging down Russian forces and even staging a counteroffensive, Foreign Minister Dmytro Kuleba seemed to indicate that the country could go beyond merely pushing Russia back to areas it or its allies held on the day of the Feb. 24 invasion.

The idea reflected Ukraine’s ability to stymie a larger, better-armed Russian military, which has surprised many who had anticipated a much quicker end to the conflict. 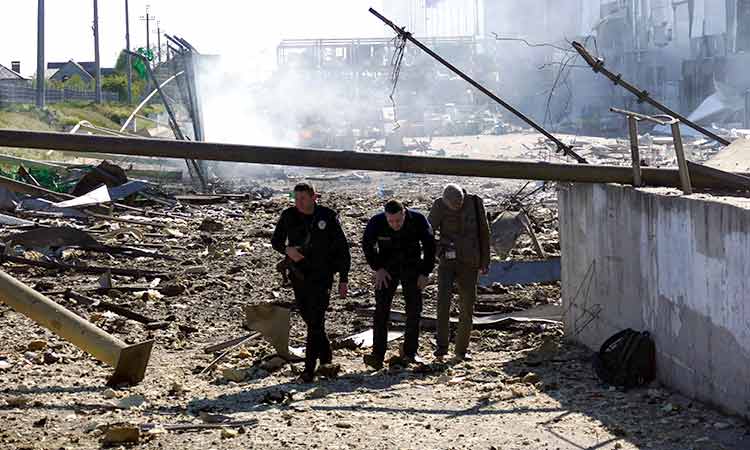 People walk at a site of a shopping centre destroyed by shelling in Odesa, Ukraine, on Tuesday. Reuters

In recent days, the United Nations and the Red Cross organized a rescue of what some officials said were the last civilians trapped at the plant. But two officials said Tuesday that about 100 were believed to still be in the complex’s underground tunnels. Donetsk regional Gov. Pavlo Kyrylenko said those who remain are people “that the Russians have not selected” for evacuation.

Kyrylenko and Petro Andryushchenko, an adviser to Mariupol’s mayor, did not say how they knew civilians were still in the complex – a warren of tunnels and bunkers spread over 11 square kilometers (4 square miles). Others said their statements were impossible to confirm.

Fighters with the Azov regiment released photos of their wounded comrades inside the plant, including some with amputated limbs. They said the wounded were living in unsanitary conditions “with open wounds bandaged with non-sterile remnants of bandages, without the necessary medication and even food.” 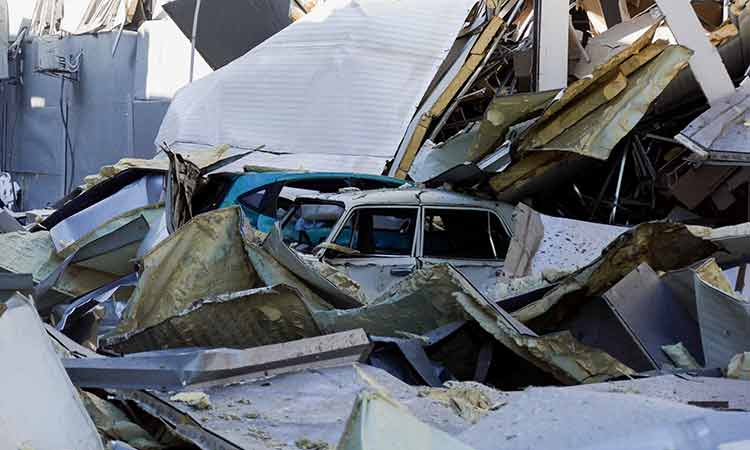 A site of a shopping centre destroyed by shelling in Odesa, Ukraine, on Tuesday. Reuters

In its statement on Telegram, the regiment appealed to the UN and Red Cross to evacuate the wounded servicemen to Ukrainian-controlled territories.

The photos could not be independently verified.

In another example of the grisly toll of the war, Ukrainian officials said they found the bodies of 44 civilians in the rubble of a building destroyed weeks ago in the northeastern city of Izyum.

New UN figures, meanwhile, said that 14 million Ukrainians were forced from their homes by the end of April, including more than 5.9 million who have left the country.