Smoke rises from an oil refinery after an attack outside the city of Lysychans’k, Donbas, Ukraine, on Sunday. AFP

Buoyed by a visit from a neighbour and ally, Ukrainians were digging in to defend the eastern city of Sievierodonetsk, which came under heavy bombardment from Russian forces trying to take the industrial area known as the Donbas.

Sievierodonetsk is the main city under Ukrainian control in Luhansk province, which together with Donetsk province make up the Donbas.

Luhansk’s governor, Serhii Haidai, said Sunday that the Russians were “simply intentionally trying to destroy the city … engaging in a scorched-earth approach.”

He said the Russians had occupied several towns and cities in Luhansk after indiscriminate, 24-hour shelling. Haidai said Moscow was concentrating forces and weaponry there, bringing in forces from Kharkiv to the northwest, Mariupol to the south, and from inside Russia. 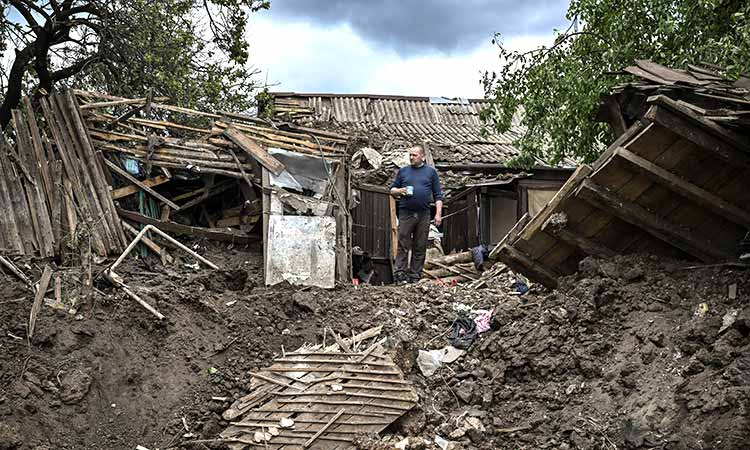 A man stands in front of a missile crater at the yard of his house in Bakhmut, Donbass Ukraine, on Sunday. AFP

The sole working hospital in Sievierodonetck has only three doctors and supplies for 10 days, he said.

The Ukrainian military said Russian forces had mounted an unsuccessful attack on Oleksandrivka, a village outside of the city.

While Russian and Ukrainian forces battled along a 551-kilometre (342-mile) wedge of Ukraine’s eastern industrial heartland, Poland’s president traveled to Kyiv on Sunday to support Ukraine’s European Union aspirations, becoming the first foreign leader to address the Ukrainian parliament since the start of the war.

President Andrzej Duda received a standing ovation when he thanked the lawmakers for letting him speak where “the heart of a free, independent and democratic Ukraine beats.” Duda said Ukraine need not submit to conditions given by Russian President Vladimir Putin. 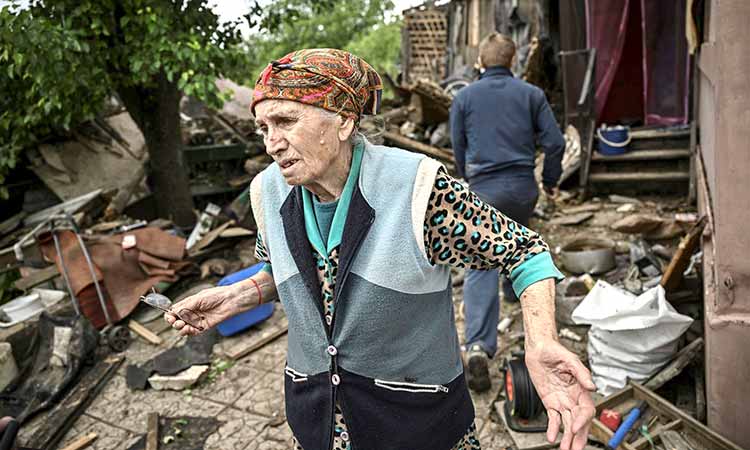 It was Duda’s second visit to Kyiv since April. Poland has become an important ally of Ukraine, welcoming millions of Ukrainian refugees and becoming a gateway for Western humanitarian aid and weapons. It is also a transit point for some foreign fighters who have volunteered to fight the Russian forces.

Ukrainian President Volodymyr Zelensky called the visit “a historic opportunity not to lose such strong relations, built through blood, through Russian aggression. All this not to lose our state, not to lose our people.” 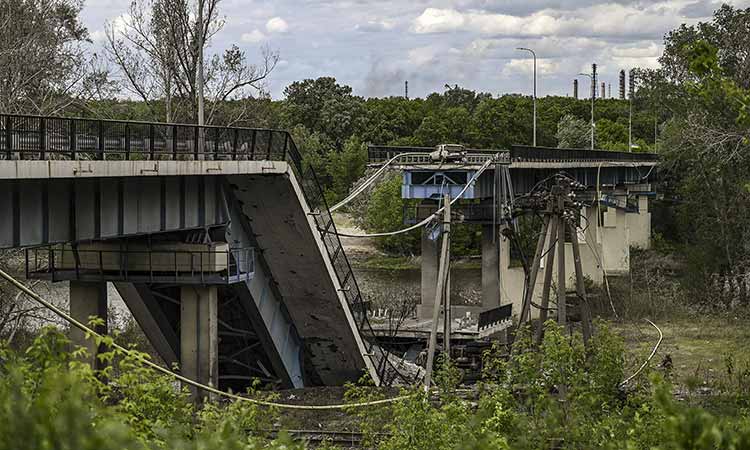 A photograph shows a downed bridge in the eastern Ukranian region of Donbas. AFP

Duda credited the US and President Joe Biden for unifying the West in supporting Ukraine and imposing sanctions against Moscow.

“Kyiv is the place from which one clearly sees that we need more America in Europe, both in the military and in this economic dimension,” said Duda, a right-wing populist leader who clearly preferred the former US president, Donald Trump, over Biden in the 2020 election.

Poland is ramping up efforts to win over EU members who are more hesitant about accepting Ukraine into the bloc. Zelensky has urged the 27-member EU to expedite his country’s request to join, and it is to be discussed at a Brussels summit in late June.