Vladimir Putin poses for photo with representatives of the flight crew of Russian airlines during his visit to Aeroflot Aviation training complex outside Moscow on Saturday. Reuters

Russian President Vladimir Putin says Moscow would consider any third-party declaration of a no-fly zone over Ukraine as “participation in the armed conflict.”

Speaking at a meeting with female pilots on Saturday, Putin said Russia would view “any move in this direction” as an intervention that “will pose a threat to our service members.”

“That very second, we will view them as participants of the military conflict, and it would not matter what members they are,” the Russian president said.
Ukrainian President Volodymyr Zelenskyy has pushed Nato to impose a no-fly zone over his country, warning that “all the people who die from this day forward will also die because of you.”

Nato has said a no-fly zone, which would bar all unauthorized aircraft from flying over Ukraine, could provoke widespread war in Europe with nuclear-armed Russia. 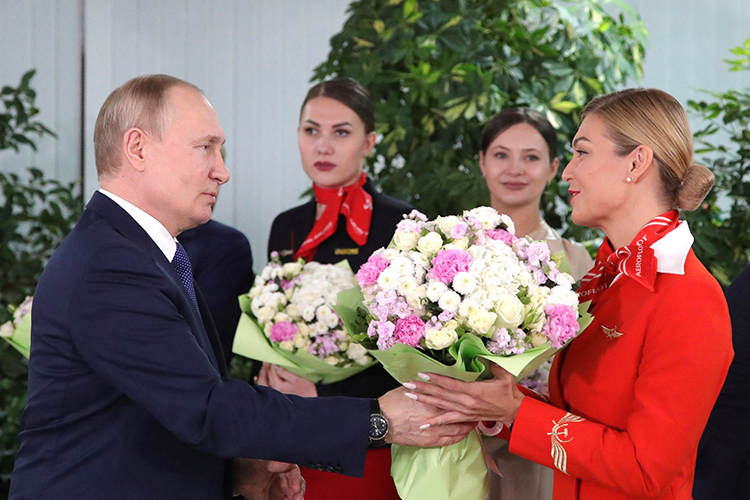 Aeroflot, Russia’s flagship carrier, has announced that it will halt all international flights except to Belarus starting from March 8.

The move by Russia’s biggest state-owned airline comes after the country’s aviation agency, Rosaviatsiya, recommended that all Russian airlines with foreign-leased planes halt both passenger and cargo flights abroad.

It cited a high risk of foreign-leased planes being impounded as part of Western sanctions that ban leasing of planes to Russia.

Rosaviatsiya’s recommendation doesn’t apply to Russian airlines that use Russian planes or foreign planes that aren’t at risk of being impounded.

It also doesn’t apply to foreign airlines from countries that have not imposed sanctions on Russia and have not shut down their airspace for Russian planes.

Aeroflot’s statement Saturday cited “circumstances that hinder operating flights” as a reason for its move.

Aeroflot said it would cancel return tickets for passengers who are scheduled to depart Russia after March 6 and travel back after March 8. Those with one-way tickets will be allowed to fly up until March 8. Earlier this week, S7, Russia’s biggest private airline, announced that it was halting all international flights starting Saturday.