Rescuers evacuate the body of a man who was killed in a rocket attack on a residential area in Kharkiv. AFP

Russian forces shelled central districts of the city of Kharkiv on Monday, hitting apartment buildings and a primary school and killing five people and wounding 22, the regional governor said.

Five children were among the injured, Oleh Synehubov, the governor of the Kharkiv region, said.

The attacks shattered apartment buildings, video footage showed. The blast gouged a vast crater in front of the school, with debris strewn about classrooms, their windows all blown out.

Rescue teams tended to the injured, ferrying them on stretchers to ambulances. 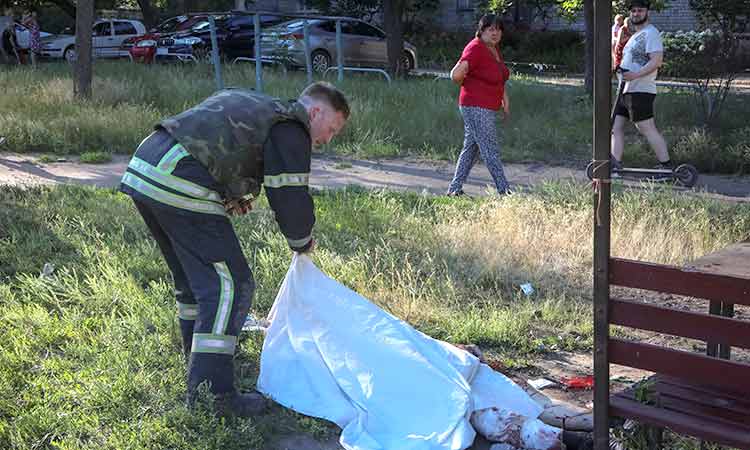 A rescuer inspects the body of a man in Kharkiv, Ukraine, on Monday. Reuters

“There was a man laying there. I helped to bandage his leg, the two of us bandaged him and stopped the bleeding. He was also wounded in the hand,” Antonenko said.

“We were waiting for the ambulance, it arrived, but was first rescuing a child, a 12-year-old boy wounded in the next entrance.”

Another resident, Maryna Svet, saw her father-in-law die within minutes of hearing what she described as deafening explosions.

“He was such a good man, kind. He kept singing all the time, he wanted us to win,” she said. 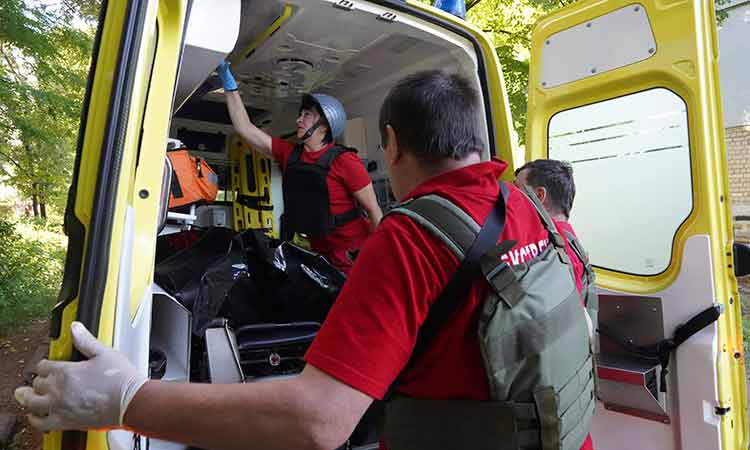 Medical workers load a body of a man killed during shelling in an apartment building in Kharkiv, Ukraine. AP

“When I came out someone told me ‘something happened to your father in law’. I came closer, he was lying down, still alive. Literally in 10 minutes, he started wheezing and that was it.”

Residents stood around the crater and debris as staff began to clean up. Cheerful decorations remained taped on classroom walls.

There was no immediate comment from Russia, which denies targeting civilians. Russia invaded Ukraine on Feb. 24 in what it calls a “special military operation”.

“All of them are civilians of Kharkiv, who were walking on the streets, on playgrounds,” Synehubov said on the Telegram messaging app.