A man sits at the debris of a destroyed house after a missile strike in Slovyansk, Donbas, on Wednesday. AFP

Russian forces edged closer Thursday to taking a key Ukrainian city after days of intense fighting, tightening their slow squeeze on the eastern Donbas region as Washington warned the war could last months.

The industrial hub of Severodonetsk has become a key target for Moscow, and the local governor said that 80 per cent of the city was now under Russian control.

Ukraine stopped Russia from seizing Kyiv after its February invasion but the campaign in the east has had a high cost, with President Volodymyr Zelensky reportedly saying that up to 100 Ukrainian soldiers are dying daily. 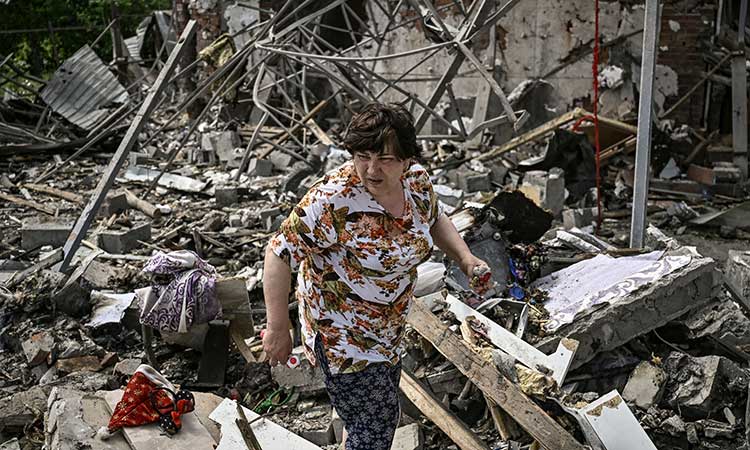 A woman looks for belongings in the ruble of a house after a strike in Slovyansk on Wednesday. AFP

“The most difficult situation is in the Lugansk region, where the enemy is trying to displace our units from their positions,” said Valeriy Zaluzhnyi, the commander in chief of Ukraine’s armed forces, according to a statement from the military.

“The enemy has a decisive advantage in artillery,” Zaluzhnyi told France’s top general, Thierry Burkhard, in a phone call, adding he want his units to be equipped with weapons of the type used by military alliance NATO.

“It will save the lives of our people”.

Ukrainian forces received a boost this week when US President Joe Biden announced that more advanced rocket systems were on the way.

The new weapon is the Himars multiple launch rocket system, or MLRS, a mobile unit that can simultaneously launch multiple precision-guided missiles up to 80 kilometres (50 miles) away.

But analysts caution the new rockets are unlikely to suddenly turn the tables — not least because Ukrainian troops need time to learn how to use them effectively.