A resident walks on debris of a residential building damaged by a strike in Sievierodonetsk, Luhansk region. Reuters

Russian troops pushed deeper into a key eastern Ukrainian city on Monday, fighting street by street with Kyiv’s forces in a battle that has left Sievierodonetsk in ruins.

As Moscow’s advance on Sievierodonetsk increased in intensity, Russian forces also shelled parts of Ukraine’s northeast, and a struggle continued for control of a southern region.

Military analysts described the fight for Sievierodonetsk as part of a race against time for the Kremlin. The city is important to Russian efforts to quickly complete the capture of the eastern industrial region of the Donbas before more Western arms arrive to bolster Ukraine’s defence. Moscow-backed separatists already held territory in the region and have been fighting Ukrainian troops for eight years. 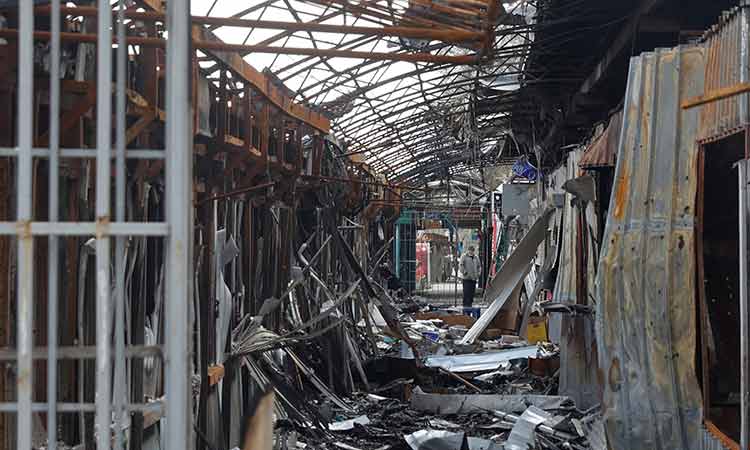 A resident stands next to debris of a market destroyed by a strike in Sievierodonetsk, Luhansk. Reuters

“The Kremlin has reckoned that it can’t afford to waste time and should use the last chance to extend the separatist-controlled territory because the arrival of Western weapons in Ukraine could make it impossible,” Ukrainian military analyst Oleh Zhdanov said.

In a potential setback for Ukraine, US President Joe Biden appeared to dismiss reports that the US was considering sending long-range rocket systems to the country.

But the European Union approved additional sanctions on Russia. As part of a long-delayed financial support package to help Ukraine, EU leaders agreed Monday to embargo most Russian oil imports into the 27-nation bloc by year-end. The agreement came after Zelensky asked the EU to target Russian oil exports so Moscow “feels the price for what it is doing against Ukraine.” 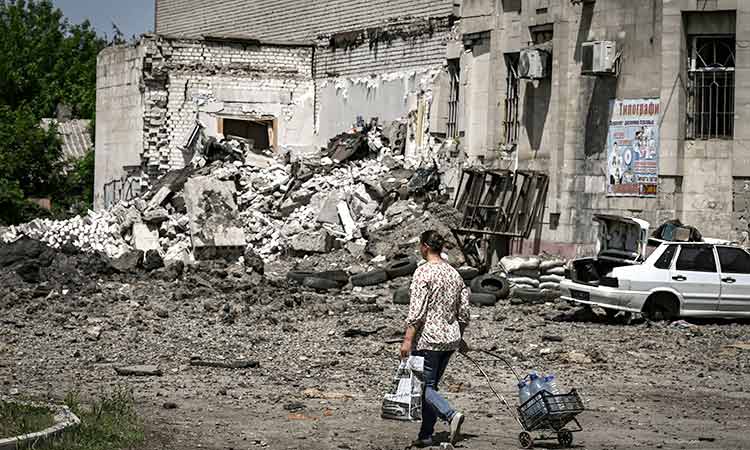 A woman walks in front of a building destroyed by a strike in the city of Lysytsansk, Donbas on Monday. AFP

Russia also ramped up its actions on the battlefield. In his nightly video address, Zelensky said the situation in the Donbas remains “extremely difficult” as Russia has put its army’s “maximum combat power” there.

The Ukrainian military said Russian forces reinforced their positions outside Sievierodonetsk, a city 145 kilometers (90 miles) south of the Russian border in an area that is the last pocket of Ukrainian government control in Luhansk.

Sievierodonetsk Mayor Oleksandr Striuk said the city has been “completely ruined.” Artillery fire has destroyed critical infrastructure and damaged 90% of the buildings, and power and communications have been largely cut to a city that was once home to 100,000 people, he said. 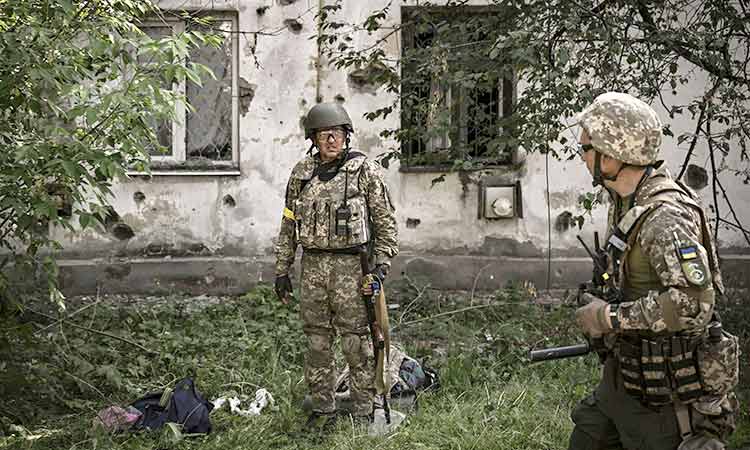 Ukrainian servicemen stand in the city of Lysytsansk at the eastern Ukrainian region of Donbas. AFP

“The number of victims is rising every hour, but we are unable to count the dead and the wounded amid the street fighting,” Striuk told The Associated Press in a phone interview, adding that Moscow’s troops advanced a few more blocks toward the city center.

He said that only about 12,000 to 13,000 residents remain, sheltering in basements and bunkers to escape the Russian bombardment. The situation recalls the siege of Mariupol, which trapped residents and led to some of the worst suffering of the war. More than 20,000 are feared dead in Mariupol.

Striuk estimated that 1,500 civilians have died in Sievierodonetsk since the war began from Russian attacks and from dire conditions that include a lack of medicine and medical treatment.

Record number of international climbers to summit peaks in Pakistan

Some Australian cricket players jittery over tour of Pakistan