This Maxar satellite image shows the Southern end of a deployment of Russian ground forces in Ivankiv, Ukraine. AFP

Russia’s political and economic isolation deepened on Monday as its forces met stiff resistance in Ukraine’s capital and other cities in the biggest assault on a European state since World War Two.

President Vladimir Putin put Russia’s nuclear deterrent on high alert on Sunday in the face of a barrage of Western-led reprisals for his war on Ukraine, which said it had repelled Russian ground forces’ attempts to capture urban centres.

125 Pakistanis evacuated from war-hit Ukraine to Poland, Hungary and Slovenia

Blasts were heard before dawn on Monday in the capital of Kyiv, breaking a few hours of quiet, and in the major city of Kharkiv, Ukraine’s State Service of Special Communications and Information Protection said. 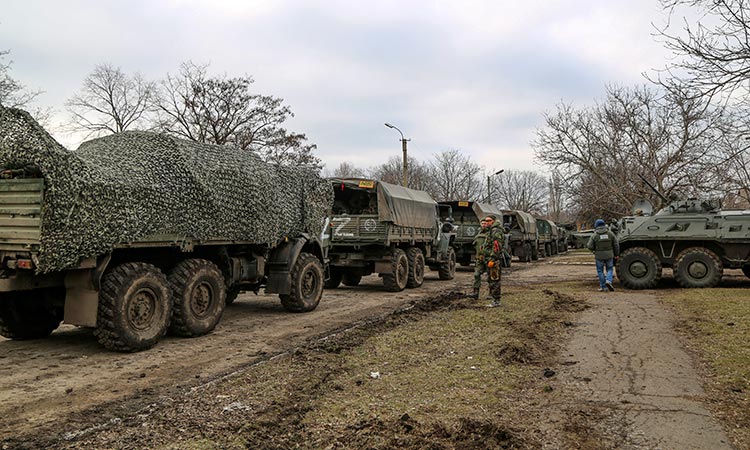 A convoy of military trucks parked in a street in Mykolaivka, Donetsk region in eastern Ukraine, on Sunday. AP

Meanwhile, Europe and Canada said Sunday they would close their airspace to Russian airlines after Russia’s invasion of Ukraine, raising the pressure on the United States to do the same.

European Commission President Ursula von der Leyen said the European Union would shut down its airspace for planes owned, registered or controlled by Russians, “including the private jets of oligarchs.”

In earlier reports, the Security Council gave a green light on Sunday for the first emergency session of the General Assembly in decades. It will give all UN members an opportunity to speak about the war Monday and vote on a resolution later in the week that US Ambassador Linda Thomas-Greenfield said would “hold Russia to account for its indefensible actions and for its violations of the UN Charter.” 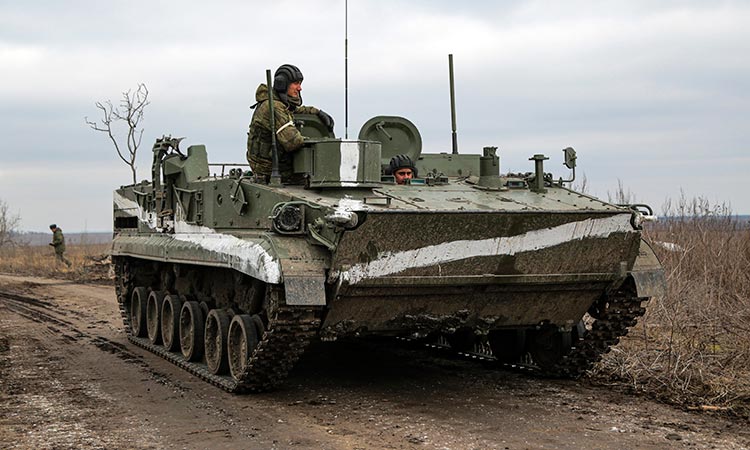 Both meetings follow Russia’s veto Friday of a Security Council resolution demanding that Moscow immediately stop its attack on Ukraine and withdraw all troops. The vote was 11-1, with China, India and the United Arab Emirates abstaining.

Ukraine said negotiations with Moscow without preconditions would be held at the Belarusian-Ukrainian border. Russian news agency Tass cited an unidentified source as saying the talks would start on Monday morning.

US President Joe Biden will host a call with allies and partners on Monday to coordinate a united response, the White House said.

The United States said Putin was escalating the war with “dangerous rhetoric” about Russia’s nuclear posture, amid signs Russian forces were preparing to besiege major cities in the democratic country of about 44 million people.

As missiles rained down, nearly 400,000 civilians, mainly women and children, have fled into neighbouring countries, a UN relief agency said.