Saudi Arabia and the United States signed 18 agreements and Memoranda of Understanding for joint cooperation in the fields of energy, investment, communications, space and health during a visit by US President Joe Biden to the Kingdom, Saudi state TV Al Ekhbariya reported.

Some of the agreements were signed between Saudi ministries of energy and investment; Royal Commission for Jubail and Yanbu; and some private sector companies and US companies including Boeing and Raytheon in the defence industry; Medtronic, Digital Diagnostics, IQVIA in the healthcare sector; and a number of other American companies in the fields of energy, tourism, education, manufacturing and textiles, according to Saudi state news agency (SPA). 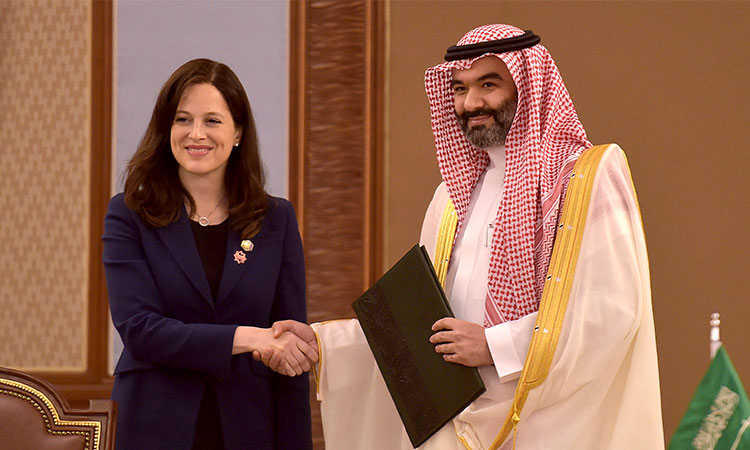 According to the SPA, the bilateral agreements, signed during US President Joe Biden’s visit to the Kingdom comprise 13 agreements made with the Ministry of Investment, the Royal Commission for Jubail and Yanbu, and numerous private sector companies.

They include a group of leading American companies, such as Boeing Aerospace, Raytheon Defence Industries, Medtronic and Digital Diagnostics, IKVIA in the healthcare sector, and many other US companies across the energy, tourism, education, manufacturing and textiles sectors.

The Saudi Space Authority also signed the Artemis Accords with US Space Agency (Nasa), which would allow it to undertake the joint exploration of the Moon and Mars in cooperation with the American space agency, while granting the Kingdom a seat in the international coalition preparing for the civil exploration and use of the Moon, Mars, comets and asteroids for peaceful purposes.

The Ministry of Communications and Information Technology (MCIT) signed a memorandum of cooperation with IBM, a leading digital tech company, to upskill 100,000 young women and men over 5 years within 8 innovative initiatives that can position the Kingdom as a hub for technology and innovation in the Middle East and North Africa region. 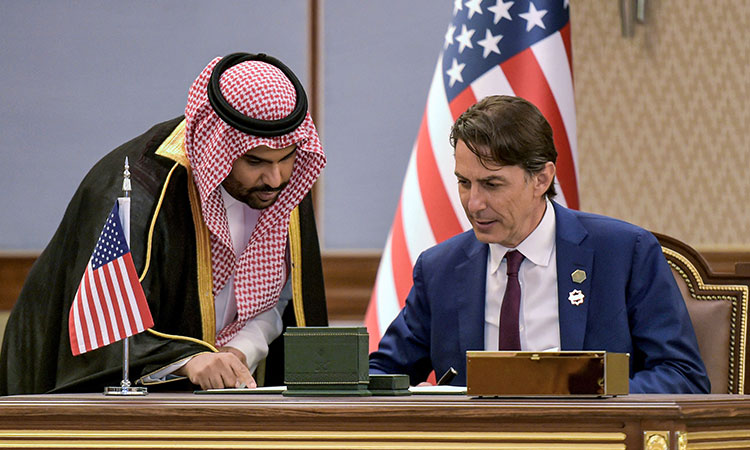 Amos Hochstein (R), the US Senior Adviser for Energy Security, signs documents during an official signing ceremony in Jeddah. AFP

MCIT also signed a memorandum of cooperation with the US National Communications and Information Administration (NTIA), which includes cooperation between the two countries on 5G and 6G technologies. The agreement targets accelerating the growth of the digital economy and enhancing the pace of research, development and innovation in the Kingdom’s digital ecosystem.

The Ministries of Energy in the Kingdom of Saudi Arabia and the United States of America signed a partnership agreement on clean energy, which includes defining areas and projects of cooperation in this sector, alongside cooperation in on civil nuclear energy and Uranium, while reinforcing the efforts of the two countries in promoting clean energy and climate action.

The Saudi and US ministries of health also signed a memorandum of cooperation on public health, medical sciences and research.

The memorandum aims to support and bolster existing relations in public health among individuals, organisations and institutions. It also seeks to consolidate joint efforts in addressing public health issues and medical, scientific and research challenges, as well as the exchange of information, expertise and academics.

The memorandum also seeks to organise joint training for workers in the health and medical fields, while addressing the proper application of health information systems, research and development and health innovation.