Helicopters trying to extinguish a wildfire in Spain; A firefighter uses a hose during firefighting operations in Ourem; A woman uses a bucket of water to put out embers on olive trees in Portugal. AP / AFP

Over 20 wildfires raged across Portugal and several burned in western Spain on Wednesday, menacing villages and disrupting tourists’ holidays amid a heatwave that meteorologists expect to push temperatures into the high 40˚C.

In France too, about 800 firefighters, supported by six water-bomber aircraft, were battling two wildfires in the southwest, which have already prompted the evacuation of thousands of campers, Gironde prefect Fabienne Buccio said.

In Portugal’s southern Algarve region, popular with tourists, authorities blocked access to the Quinta do Lago luxury resort and golf course as thick plumes of smoke rose from an area next to it.

“A fire is entering an urban area, with a lot of dry vegetation that, with small sparks, quickly becomes a secondary fire. We are concerned and that is what we are telling to people,” said Richard Marques, a civil protection worker in the area. 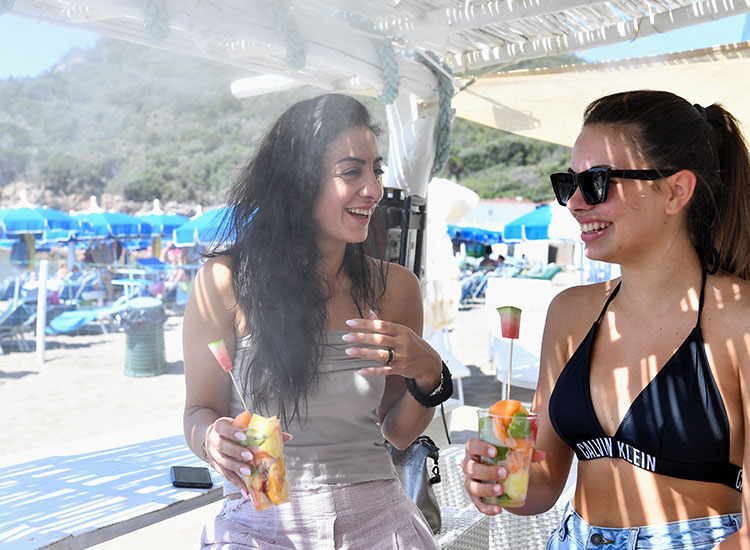 Tourists have a fruit salad at a bar on a beach as Italy prepares for second heatwave. Reuters

In the central district of Leiria north of Lisbon, where temperatures soared to 45°C, authorities blocked a major motorway.

Flames and thick smoke could be seen on both sides of the road, while helicopters and aircraft dropped water.

Villagers who have not been evacuated poured water on roofs of their homes.

Nearly 800 firefighters were combating two active blazes in the area, while in the whole of mainland Portugal 2,124 firefighters, backed by 28 aircraft, were fighting 24 forest blazes.

Nearly all of mainland Portugal was on red alert for extreme heat conditions, with the highest temperatures of 45°C in the central Santarem and Leiria districts, the IPMA weather institute said. The country’s record temperature of 47.3°C was registered in 2003. 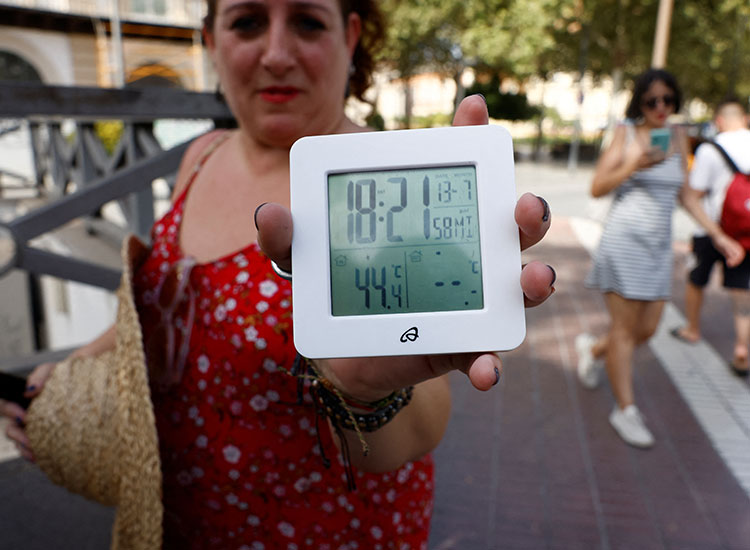 A woman shows a thermometer displaying 44˚C in a street during the second heatwave of the year, in Spain. Reuters

The biggest of the two fires is around the town of Landiras, south of Bordeaux, where roads have been closed and 500 residents evacuated.

The other one is along the Atlantic Coast, close to the iconic “Dune du Pilat” – the tallest sand dune in Europe – located in the Arcachon Bay area, above which heavy clouds of dark smoke were seen rising in the sky.

That fire led to the preventive evacuation of 6,000 people from five surrounding campsites. They were taken for shelter to a local exhibition centre.

“Other campers woke us up at around 4:30 in the morning. We had to leave immediately and quickly choose what to take with us,” Christelle, one of the evacuated tourists, told BFM TV.