The inauguration ceremony was attended by top officers of Sharjah Police and a number of directors of departments and representatives of local Arab and foreign media. WAM

Brigadier General Abdullah Mubarak Bin Amir, Deputy Commander-in-Chief of Sharjah Police, inaugurated, on Thursday, at City Centre Al Zahia, the interactive awareness platform “Be Aware,” which coincides with the campaign launched by the Departments of Criminal Investigation, Media and Public Relations, to raise awareness of fraud and electronic blackmail.

The Deputy Commander-in-Chief of Sharjah Police stressed the importance of raising awareness of cybercrime, which is a global challenge in light of the increasing use of technology in all areas of life, which calls for spreading security awareness for caution and taking measures to protect against fraud in all its forms. 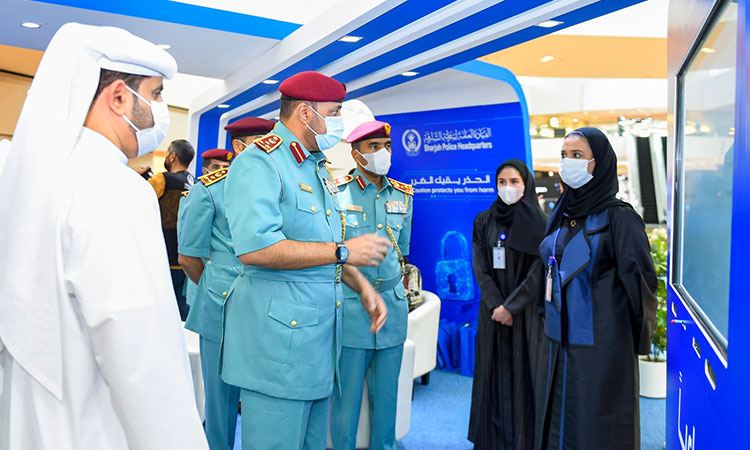 Senior police officers during the launching ceremony of ‘Be Aware.’

He pointed out that this platform is to provide direct guidance in an innovative way to all segments of society, including UAE citizens, residents and visitors, inviting them to visit it and learn about prevention and protection methods.

He commended the strategic, supportive, media and influential partners on social media, for their effective role in conveying the awareness message in its entirety, to ensure the achievement of the desired goals.

Colonel Omar Ahmed Abu Al Zoud, Director of Criminal Investigation Department at Sharjah Police, said that the “Be Aware” campaign was launched in early July and will last for a month, in cooperation with the strategic partners, with the aim of educating community members about cybercrime and various fraud methods.

The Director of the Criminal Investigation Department called on the public not to hesitate to report any electronic crime, blackmail they are exposed to, or negative behaviours through the service via the Sharjah Police application, or by calling (0559992158) and (065943228), or by calling (999) for emergency situations.