Sheikh Sultan pointed out the importance of research and expanding knowledge for media figures.

His Highness Dr Sheikh Sultan Bin Muhammad Al Qasimi, Supreme Council Member and Ruler of Sharjah, at the 3rd Media Seminar of the Sharjah Broadcasting Authority (SBA), highlighted the Authority’s critical role through its various media platforms in providing meaningful content to the audience that contributes to immunising society from extraneous ideas or phenomena and the importance of research and expanding knowledge for media figures in order to link ideas and recipients.

He praised the efforts of SBA’s employees in broadcasting Sharjah development journey, its activities and events, and meaningful programmes to the people.

During the meeting, several primary issues were addressed by the Sharjah Ruler to support the Authority’s roles and the content it provides to the audience, which plays a significant role in preserving the identity, language, religion, heritage, and history of Sharjah and its citizens. 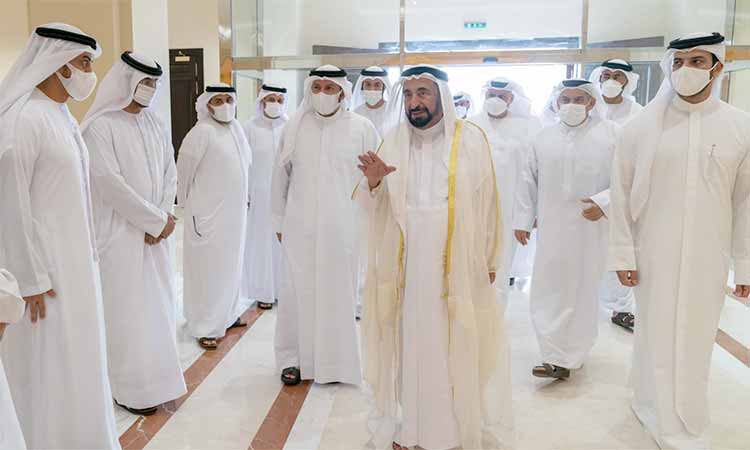 Sheikh Sultan arrives at the Media Seminar of the Sharjah Broadcasting Authority. WAM

Furthermore, he reviewed the journey of culture and knowledge in Sharjah, addressing the efforts made to develop education for more than 50 years, stressing the need to provide meaningful content that contributes to immunising society from extraneous ideas or phenomena. He also dealt with the history of the Authority since its establishment and its follow-up to all implemented programmes professionally, shedding light on various cultural and family programmes of Sharjah’s entities.

Sheikh Sultan pointed out the importance of research and expanding knowledge for media figures to link ideas and recipients, as well as the constant development aimed at providing materials in the interest of current and future generations.

At the end of the speech, he gave several suggestions to the Authority’s employees, ensuring constant improvements in Arabic language, and acquiring knowledge, as media figures occupy a vital role in community growth.

VIDEO: Injured monkey, baby turn up at clinic for treatment in India