This photo shows the patient after the neck surgery.

Sheikh Shakhbout Medical City (SSMC), one of the UAE’s largest hospitals for serious and complex care and a joint-venture partnership between Abu Dhabi Health Services Company (SEHA) and Mayo Clinic, successfully performed a high risk, complex oral maxillofacial surgery on a patient with a recurring tumour.

The 42-year-old, female Filipina patient’s journey dates back to 2009 when she noticed a small lump behind her ear similar to the size of a bean. When she consulted her local doctor, she was initially prescribed paracetamol and eardrops. After a few years of ignoring acute pain, the lump continued to grow and the patient was then diagnosed with a parotid tumour.

Dr. John Devine, maxillofacial, head and neck surgery consultant and division chair at SSMC, said: “The patient had presented with a parotid tumour which is an abnormal growth of cells that form in the parotid glands, the largest of the three major salivary glands. After the first surgery in 2016, the patient had a recurrence of the tumour in 2018, and later in 2020, she underwent a biopsy, which identified that the tumour is a malignant acinic cell carcinoma. The patient came to us in 2021, we found that the tumour had become quite advanced, the size of a fist and was ulcerating her skin.”

Dr. Devine, along with a multidisciplinary team, conducted a full investigation of a CT scan and a biopsy, which then confirmed the malignant state of the tumour and the potential to spread to other areas of the body. The team determined that the patient required surgery and that the tumour was operable. 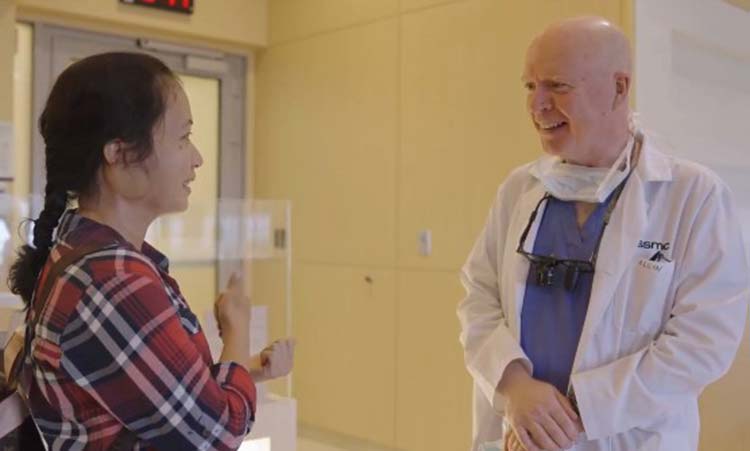 “The surgery itself carried several risks for the team to factor in and control, including facial paralysis being a key risk. We also had to design the surgery in a way that we were able to do reconstruction, which was needed due to the size of the tumour. We performed the procedure using a facial NIM alarm system to detect the nerves and remove the tumour along with a large part of the facial skin. We then took a segment of her upper arm, an artery, and a vein to reconstruct the area. We were pleased to have accomplished the removal and reconstruction within the same surgery,” continued Dr. Devine.

The patient said: “I was very pleased that the surgery went well and that I was finally able to get the help I needed after living with the tumour for such a long time. I’m so happy with the results and I’m very grateful for Dr. Devine because he really went the extra mile, and the nursing staff were very caring and checking up on me daily.”

During the post-surgery phase, SSMC provided the appropriate care where the patient underwent speech therapy, had sessions with a physiotherapist and consulted a dietician.

“We owe the success of this surgery to our team of multidisciplinary experts who provided a 360-degree care for the patient. We are extremely pleased that we were able to support the patient, not only by removing a potentially life-threatening tumour, but by significantly improving her quality of life after suffering from her condition for so many years,” concluded Dr. Devine.