All the six suspects involved in the killing of Urooj Abbas and Anisa Abbas (circle) in police custody. Twitter photo

Pakistani police arrested six men from the same family, accused of murdering two sisters who were from the same village but also had Spanish citizenship.

Police said that Urooj Abbas, 21, and Anisa Abbas, 23, were allegedly killed for refusing to bring their husbands — cousins from forced marriages — to Spain. They were severely tortured and shot dead in the Gujrat district of Punjab province.

Officer Ataur Rehman said that murder charges were levelled against the victims’ brother, a paternal uncle, both husbands, a cousin, and both fathers-in-law. Two unknown suspects and another relative also charged in the murder were still at large. 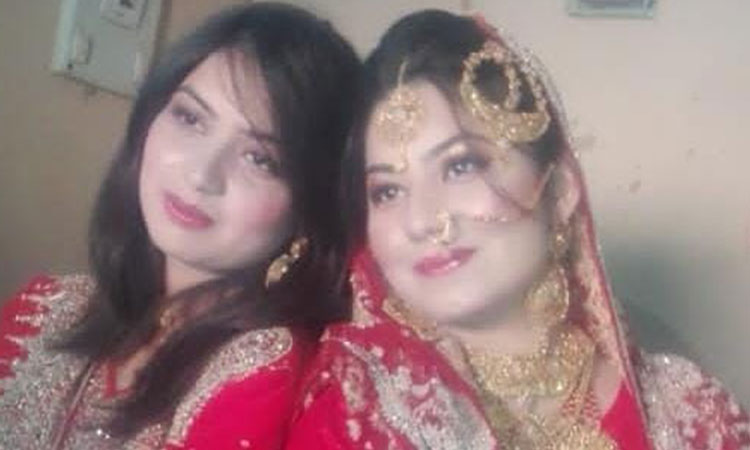 Urooj Abbas and Anisa Abbas pose for the photograph on their wedding day. File / Twitter photo

According to a media report, the two sisters who were killed by their close kin had been emotionally blackmailed as they were called to Pakistan on the pretext that their mother was on the deathbed and she wanted to see them.

On being misinformed about the condition of their mother, both the sisters arrived in Pakistan a day before their murder on May 20.

A close kin to victims Arooj Abbas and Aneesa Abbas said that Azra Bibi, the mother of deceased women, had also been evacuated from village Nothia of Gulliana police precincts in Kharian tehsil, Gujrat district, following the burial of her daughters last Saturday since she also faced a threat to her life. He said one of suspects, Hassan Aurangzaib, whose nikah was done to Arooj Abbas, had also hurled threats to kill the victims’ mother. However, Hassan is in custody now.

A relative of the mother immediately took her out of the village after the burial and now she had been shifted to a safer place in another city. The woman is in contact with police and might record her statement before the police within a few days after coming out of the trauma.

The mother was one of the eyewitnesses of the brutal killings as her statement could prove vital in the case, an official of the Gujrat police said.

The area people and family sources said Azra Bibi had been confined by her in-laws in a room after she came to Pakistan a couple of months ago and they did not let her talk to her daughters in Spain.

However, Muhammad Abbas, the father of deceased remained in Spain and did not accompany his daughters to village Nothia where the plot of their killing had already been prepared.

Moreover, Azra Bibi had already been passing through the agony of a tragic death of her elder son, Haroon Abbas, who was 18 years old when he drowned in a Jhelum canal around seven years ago when he went there along with his cousins. Similarly, the sisters were against their forced marriages to the cousins.

Earlier, a police spokesman said both were seeking separation from their Pakistani husbands and were lured back from Spain to Gujrat where they were strangled and shot on Friday night.

“The family created a story to convince them to come to Pakistan for a couple of days,” said Gujrat police spokesman Nauman Hassan.

“Preliminary investigations show this is a case of honour killing, but it is still developing and the investigation is ongoing,” he had said.

Police also said the women were being “pressurised” by their spouses — who were also their cousins — to aid their emigration to Spain.