A view of the Chrysler Building (centre) during a snow storm in New York City on Saturday. AFP

Blinding snow whipped up by powerful winds pummeled the eastern United States on Saturday, as one of the strongest winter storms in years triggered transport chaos and power outages across a region of some 70 million people.

A nor’easter with hurricane-force wind gusts battered much of the East Coast on Saturday, flinging heavy snow that made travel treacherous or impossible, flooding coastlines, and threatening to leave bitter cold in its wake.

Thousands of flights cancelled as Eastern US braces for heavy snow

The storm thrashed parts of 10 states, with blizzard warnings that stretched from Virginia to Maine. Philadelphia and New York saw plenty of wind and snow, but Boston was in the crosshairs. The city tied its record for biggest single-day snowfall, with 23.6 inches (60 centimetres), the National Weather Service said. 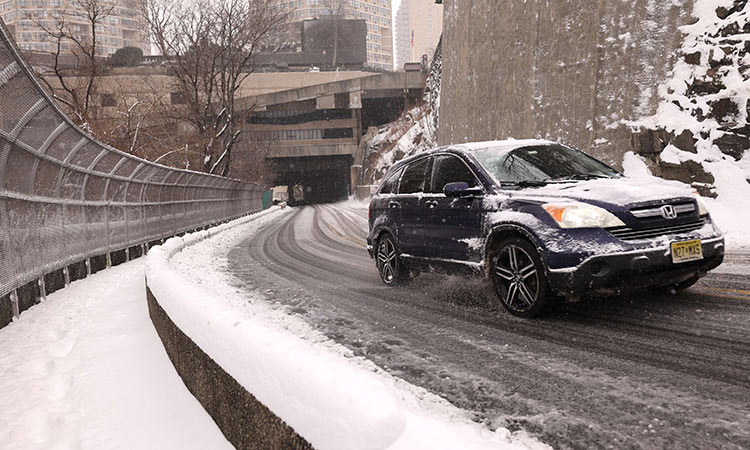 An SUV slowly drives up a steep road covered in snow and slush in West New York, New Jersey. AFP

Major cities like New York and Boston bore the brunt of the blizzard, which the National Weather Service (NWS) confirmed intensified on Saturday into a “bomb cyclone” – characterised by the explosive power of rapid drops in atmospheric pressure.

The heaviest-hit parts of New York and Massachusetts received two feet (61 centimetres) of snow by early evening, with more than 95,000 homes in Massachusetts reported without power.

Winds gusted as high as 83 mph (134 kph) on Cape Cod in Massachusetts. Southwest of Boston, the town of Sharon, Massachusetts, had received more than 30 inches (76 centimetres) of snow by Saturday night, while Islip, New York, and Warren, Rhode Island, both saw more than 24 inches (61 centimetres). 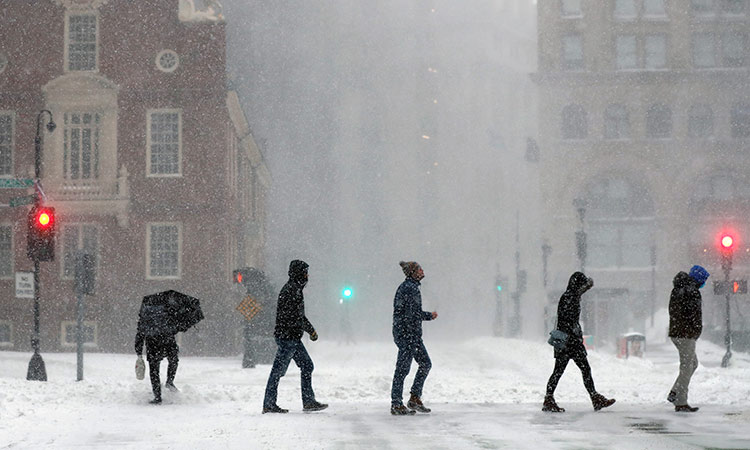 The wind scoured the ground bare in some spots and piled the snow into huge drifts in others.

Cold weather stretched as far south as Florida, where the NWS warned of “scattered to isolated falling iguanas from trees” as plunging temperatures temporarily paralysed the large lizards. 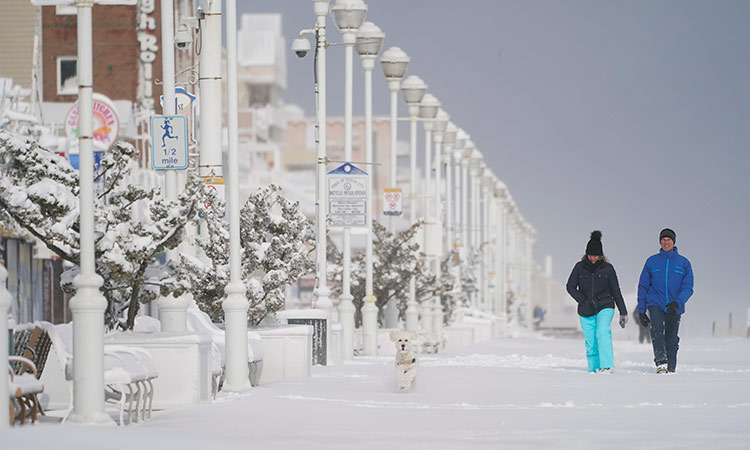 A dog is followed by a couple as they stroll on the snow-covered boardwalk in Ocean City, Maryland. AP

Residents in towns and cities across the eastern seaboard were urged to avoid all unnecessary travel for a second night of whiteout conditions, with additional snowfall expected to be heaviest across New England.

In Long Island, officials said a woman had been found dead in her car by a snowplow operator.

Ocean City, Maryland, recorded at least a foot (30 centimetres) of snow. Maryland State Police tweeted that troopers had received more than 670 calls for service and responded to over 90 crashes by midmorning.

New York Gov. Kathy Hochul advised people to stay home and warned of below-zero windchills after the storm passes. The state had declared a state of emergency on Friday evening.

“This is a very serious storm, very serious. We’ve been preparing for this. This could be life-threatening,” Hochul said. “It’s high winds, heavy snow, blizzard conditions – all the elements of a classic nor’easter.” 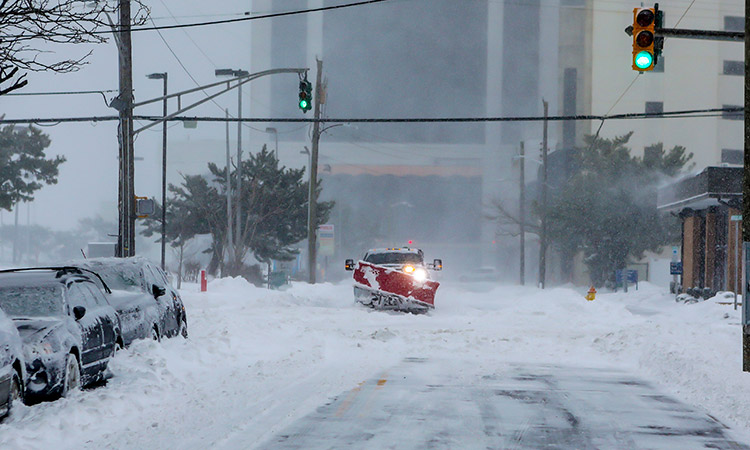 A plough clears snow from a roadway during blizzard conditions in Atlantic City, New Jersey.  AP

Police on Long Island said they had to help motorists stuck in the snow, and an elderly man shovelling snow died after falling into a swimming pool. In Philadelphia, few drivers ventured onto streets covered in knee-high drifts.

Dave McGillivray, race director for the Boston Marathon, jokingly invited the public to his suburban Boston home on Saturday for a free snow-shovelling clinic.

“I will provide the driveway and multiple walkways to ensure your training is conducted in the most lifelike situation,” he said.

Washington and Baltimore got some snow but were largely spared. The worst of the nor’easter was expected to blow by Sunday morning into Canada, where several provinces were under warnings.