Women stand in front of a graffiti painted outside the premises of Sri Lanka’s presidential palace in Colombo on Sunday. AFP

Leaders of Sri Lanka’s protest movement said on Sunday they would occupy the residences of the president and prime minister until they finally quit office, the day after the two men agreed to resign leaving the country in political limbo.

Thousands of protesters stormed President Gotabaya Rajapaksa’s home and office and the prime minister’s official residence on Saturday, as demonstrations over their inability to overcome a devastating economic crisis erupted into violence.

Rajapaksa will quit on July 13, while Prime Minister Ranil Wickremesinghe also said he would step down to allow an all-party interim government to take over, according to the speaker of parliament. 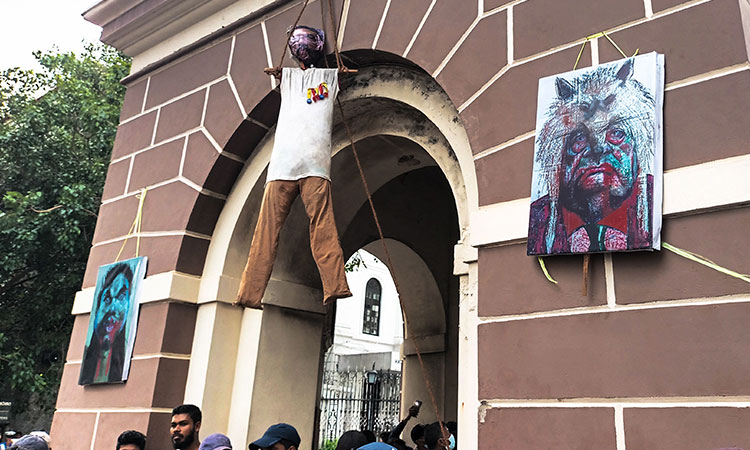 “The president has to resign, the prime minister has to resign and the government has to go,” playwright Ruwanthie de Chickera told a news conference at the main protest site in Colombo.

Flanked by other leaders helping coordinate the movement against the government, she said the crowds would not move out of the official residences of the president and prime minister until then.

Though calm had returned to the streets of Colombo on Sunday, throughout the day curious Sri Lankans roamed through the ransacked presidential palace. Members of the security forces, some with assault rifles, stood outside the compound but did not stop people from going in.

“I’ve never seen a place like this in my life,” 61-year-old handkerchief seller B.M. Chandrawathi, accompanied by her daughter and grandchildren, told Reuters as she tried out a plush sofa in a first-floor bedroom.

“They enjoyed super luxury while we suffered. We were hoodwinked. I wanted my kids and grandkids to see the luxurious lifestyles they were enjoying.”

Nearby, a group of young men lounged on a four-poster bed and others jostled for turns on a treadmill set up in front of large windows overlooking manicured lawns.

The political chaos could complicate efforts to pull Sri Lanka out of its worst economic crisis in seven decades, triggered by a severe shortage of foreign currency that has stalled imports of essentials such as fuel, food and medicines.

The financial meltdown developed after the COVID-19 pandemic hammered the tourism-reliant economy and slashed remittances from overseas workers.

It has been compounded by large and growing government debt, rising oil prices and a seven-month ban on importing chemical fertilisers last year that devastated agriculture.

Petrol has been severely rationed and long lines have formed in front of shops selling cooking gas. The government has asked people to work from home and closed schools in an effort to conserve fuel. Headline inflation in the country of 22 million hit 54.6% last month, and the central bank has warned that it could rise to 70% in the coming months.

US Secretary of State Antony Blinken said any government in power would have to “work quickly to try to identify and implement solutions that will bring back the prospect of long-term economic stability, address the Sri Lankan people’s discontent, which is so powerful and palpable.”

“We would urge the Sri Lankan parliament to approach this with a commitment to the betterment of the country, not any one political party,” he said at a news conference in Bangkok.

India, Sri Lanka’s giant neighbour which has provided support of about $3.8 billion during the crisis, said it was watching events closely.

The International Monetary Fund (IMF), which has been in talks with the government for a possible $3 billion bailout, also said it was monitoring events closely.

“We hope for a resolution of the current situation that will allow for resumption of our dialogue on an IMF-supported programme,” the global lender said in a statement.

WHERE IS PRESIDENT RAJAPAKSA?

Rajapaksa has not been seen in public since Friday has not directly said anything about resigning. Wickremesinghe’s office said he would also quit, although neither he nor Rajapaksa could be contacted. 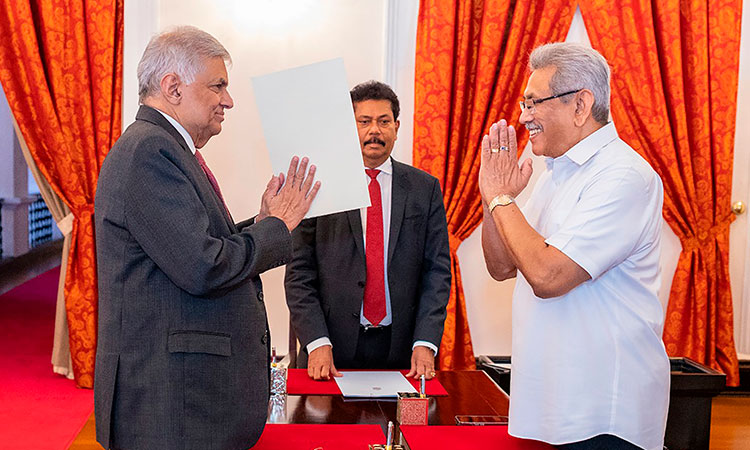 Parliament Speaker Mahinda Yapa Abeywardena said on Saturday Rajapaksa’s decision to step down was taken “to ensure a peaceful handover of power.”

Constitutional experts say if the president and prime minister resign, the next step would be for the speaker to be appointed as acting president and for parliament to vote for a new president within 30 days to complete Rajapaksa’s term.

Frustration with the economic crisis boiled over on Saturday when a huge crowd of protesters surged passed armed guards into the colonial-era presidential palace and took it over. Furniture and artefacts were smashed, and some took the opportunity to frolic in its swimming pool.

They then moved on to the president’s office and the prime minister’s official residence. Late in the evening, protesters set fire to the private home of Wickremesinghe.

Neither Rajapaksa nor Wickremesinghe were in their residences when the buildings were attacked.

About 45 people were brought injured into a main hospital on Saturday, a hospital official said, but there were no reports of deaths in the otherwise peaceful takeovers.