Army troops and police used brute force early on Friday morning to clear a camp near the presidential palace occupied by protesters. They were demonstrating there for the past 104 days against the economic mess of the nation. The move came even as a Rajapaksa man was made Prime Minister of the country.

Before dawn, the soldiers and policemen cleared the camp. Army and police staff arrived in trucks and buses around midnight, removing tents and blocking roads leading to the site.

Security forces were seen beating up at least two journalists. At least two lawyers also were assaulted when they went to the protest site to offer their counsel, said the Bar Association of Sri Lanka, the main lawyers’ body in the country.

Some protesters were badly injured and some demonstrators and lawyers were arrested, said Harshani Siriwardana, a lawyer and a protester.

A BBC video journalist was beaten by the army and one soldier snatched his phone and deleted videos, according to the broadcaster.

Nine people, including two who are injured, have been arrested by police, it added.

Police described the incident as a “special operation to take [back] control of the presidential secretariat”.

When asked about the attack on the BBC journalist, one police spokesman said he was unaware of the incident. 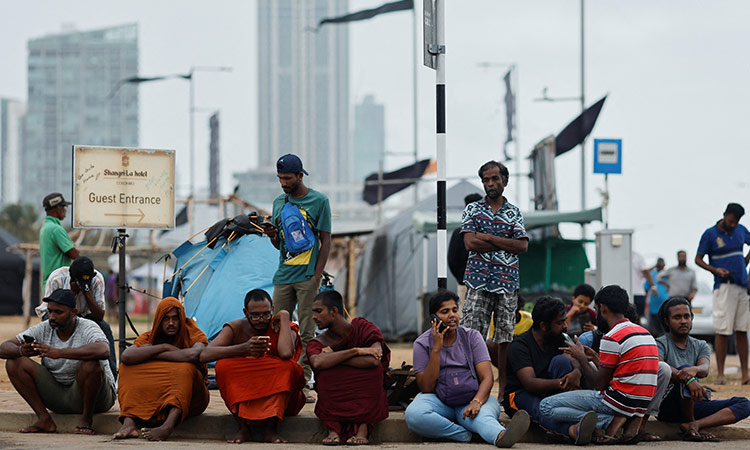 Protesters sit near the president’s office after they evicted by the military in Colombo, Sri Lanka. AP

The crackdown occurred even though protesters had announced they would vacate the site on Friday voluntarily. The UN, US and others slammed the brutality of the action. A lawyer said several protesters were hospitalised for injuries. Even journalists and a lawyer were among people arrested.

Sri Lankans have taken to the streets for months demanding their leaders resign over an economic crisis that has left the island nation’s 22 million people short of essentials like medicine, food and fuel. Last week, the protests forced out former President Gotabaya Rajapaksa, whose family has ruled Sri Lanka for most of the last two decades.

The prime minister he appointed in May to lead negotiations for a bailout of the bankrupt country succeeded him. Ranil Wickremesinghe was elected president by lawmakers, and he appointed as his own successor his school classmate Dinesh Gunawardena, who is 73 and from a prominent political family. 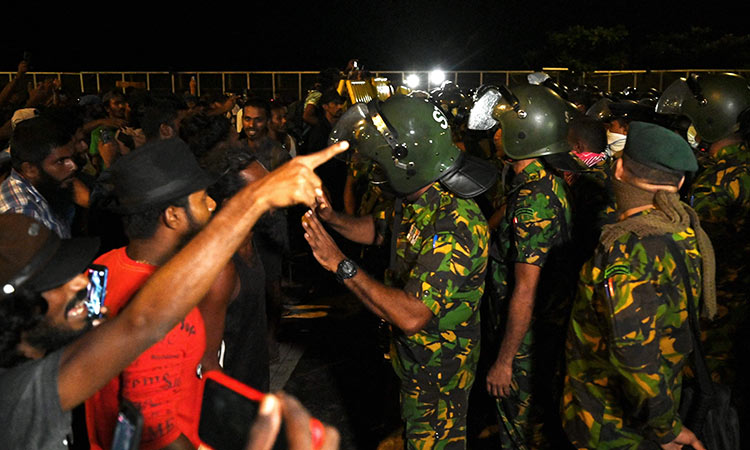 On Monday, when he was acting president, Wickremesinghe declared a state of emergency giving him the power to change or suspend laws and giving authorities broad power to search premises and detain people. On Friday, he issued a notice under the state of emergency urging the armed forces to maintain law and order nationwide, according to the Associated Press.

The Bar Association called for a halt to the “unjustified and disproportionate actions” of armed forces targeting civilians. It called on Wickremesinghe to ensure he and his government respected the rule of law and citizens’ rights.

“The use of the Armed Forces to suppress civilian protests on the very first day in office of the new President is despicable and will have serious consequences on our country’s social, economic and political stability,” the association said in its statement. 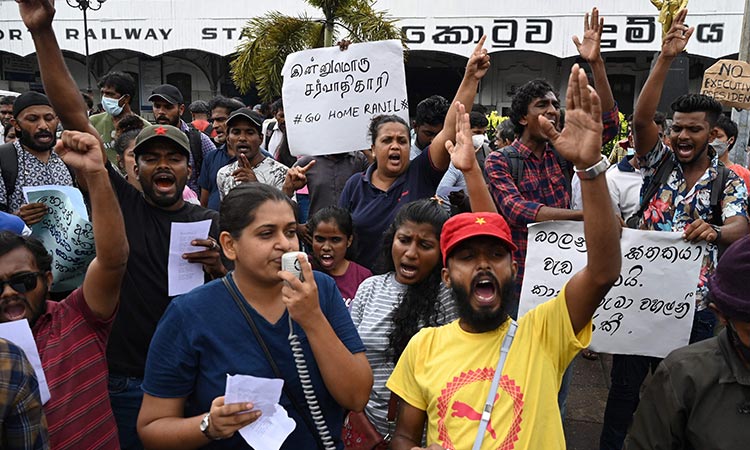 The leader of the political opposition, Sajith Premadasa, tweeted, “A cowardly assault against PEACEFUL protestors, who agreed to vacate the sites today; a useless display of ego and brute force putting innocent lives at risk & endangers Sri Lanka’s international image, at a critical juncture.”

Hanaa Singer-Hamdy, the UN resident coordinator to Sri Lanka, expressed grave concern over the use of force and said journalists and human rights defenders should not be impeded when they monitor demonstrations. “Actions that stifle protests and the right to peaceful assembly can worsen economic and political instability in Sri Lanka,” Singer-Hamdy said.

US Ambassador Julie Chung also expressed concern. “We urge restraint by authorities and immediate access to medical attention for those injured,” she said in a tweet.