People walk beside tents after crossing the border from Ukraine to Poland on Sunday. Reuters

Ukrainian President Volodymyr Zelensky said Russia’s siege of the port city of Mariupol was “a terror that will be remembered for centuries to come,” while local authorities said thousands of residents there had been taken by force across the border.

“Over the past week, several thousand Mariupol residents were deported onto the Russian territory,” the city council said in a statement on its Telegram channel late on Saturday.

Many of Mariupol’s 400,000 residents have been trapped for more than two weeks as Russia seeks to take control of the city, which would help secure a land corridor to the Crimea peninsula that Moscow annexed from Ukraine in 2014. 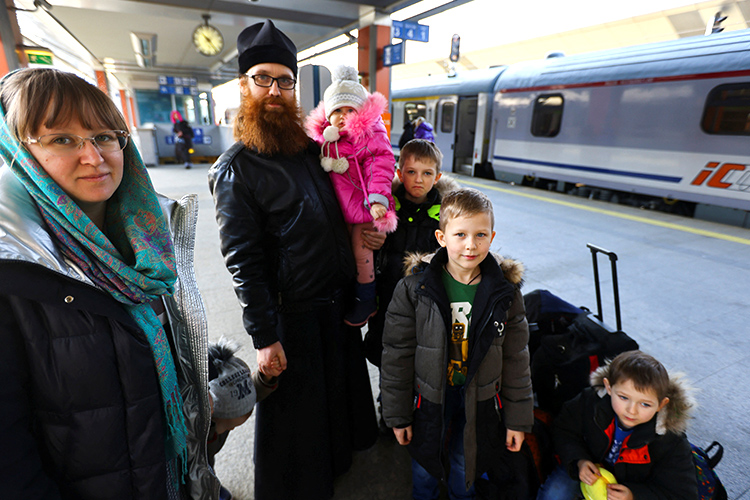 Anna, wife of Russian Orthodox church priest Mihail Pitnitskiy, and their children wait to board a train to Budapest, after fleeing Ukraine. Reuters

Ukrainian presidential adviser Oleksiy Arestovych said on Sunday there had been a relative lull over the past day, with “practically no rocket strikes on (Ukrainian) cities.” He added that front lines were “practically frozen.”

The Mariupol bombardment has left buildings in rubble and severed central supplies of electricity, heating and water, according to local authorities.

Rescue workers were still searching for survivors in a Mariupol theatre that local authorities say was flattened by Russian air strikes on Wednesday. Russia denies hitting the theatre.

Mariupol’s city council also said Russian forces bombed a Mariupol art school on Saturday in which 400 residents were sheltering, but the number of casualties was not yet known.

Reuters could not independently verify the claims. Russia denies targeting civilians. Zelensky said the siege of Mariupol was a war crime. 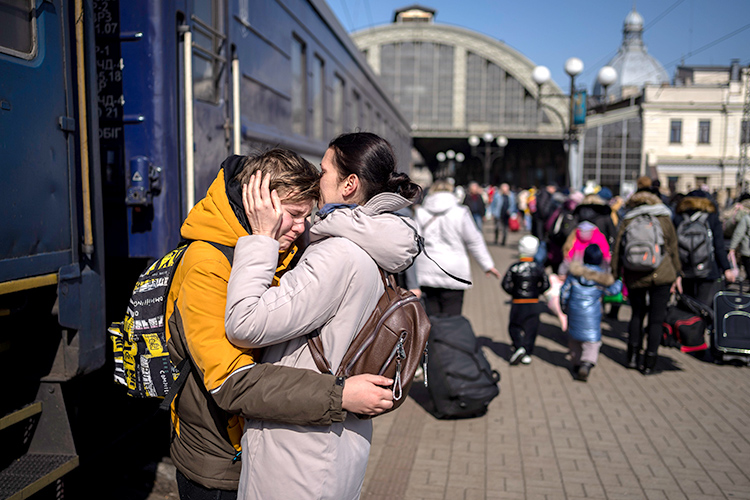 A mother embraces her son who escaped the besieged city of Mariupol and arrived at the train station in Lviv. AP

“To do this to a peaceful city… is a terror that will be remembered for centuries to come,” he said in a late night broadcast. Still, he said, peace talks with Russia were needed although they were “not easy and pleasant.”

Air raid sirens sounded across Ukrainian cities on Sunday and Russia’s defence ministry said cruise missiles were launched from ships in the Black Sea and Caspian Sea, as well as hypersonic missiles from Crimean airspace.

Hypersonic missiles were deployed by Russia for the first time in Ukraine on Saturday, Russia’s Interfax news agency reported, in a strike which Moscow said destroyed a large underground depot for missiles and aircraft ammunition.

A spokesperson for the Ukrainian Air Force Command confirmed the attack in the western Ivano-Frankivsk region, but said the Ukrainian side had no information on the type of missiles used. 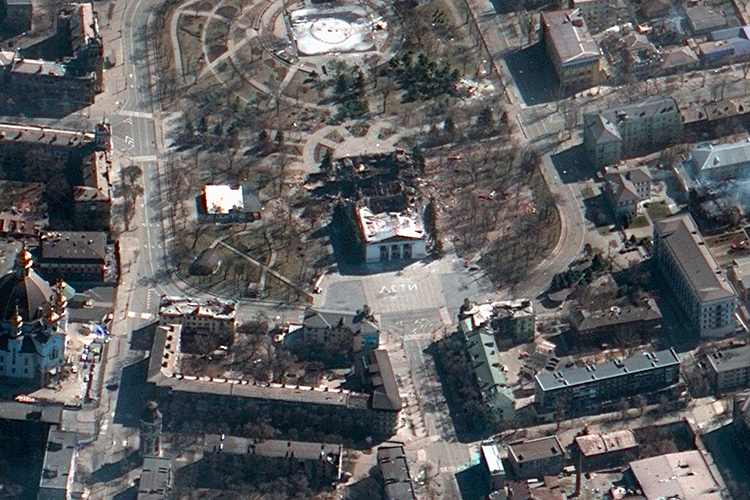 An aerial view of the damaged buildings in Mariupol.

Ukraine has so far evacuated a total of 190,000 people from such areas, Vereshchuk said on Saturday.

The UN human rights office (UNHCR) said at least 902 civilians had been killed in Ukraine as of midnight Saturday, though it says the real toll is probably much higher.

The Ukrainian prosecutor general’s office said 112 children had been killed. Ten million people have been displaced by the fighting, including nearly 3.4 million who have fled the country as refugees, the UNHCR said.

Russian forces have also taken heavy losses, and long columns of troops that bore down on the capital Kyiv have been halted in the suburbs.

Russia last acknowledged on March 2 that nearly 500 of its soldiers had been killed. Reuters has not been able to independently verify the death count. 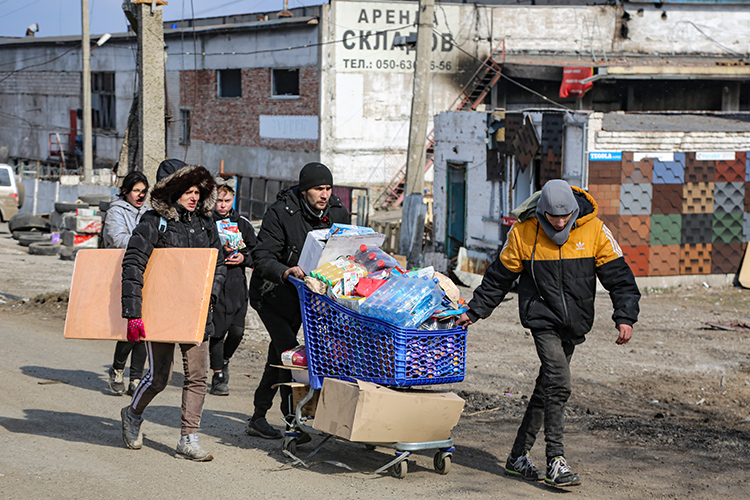 Zelensky’s office said on Sunday Ukraine sees a high risk of an attack launched from Belarus on the western Volyn region, which lies to the north of the city of Lviv.

It was not immediately clear whether Ukraine saw such an attack coming from Russian or from Belarusian forces.

While Belarus is a close ally of Russian President Vladimir Putin and has served as a staging post for Russian forces, it has so far not publicly committed troops to supporting Russia.

In Syria, some paramilitary fighters say they were ready to deploy to Ukraine to fight in support of their ally Russia but have not yet received instructions to go.

Zelensky, who has made frequent appeals for more help from abroad, was due to address the Israeli parliament via video link. 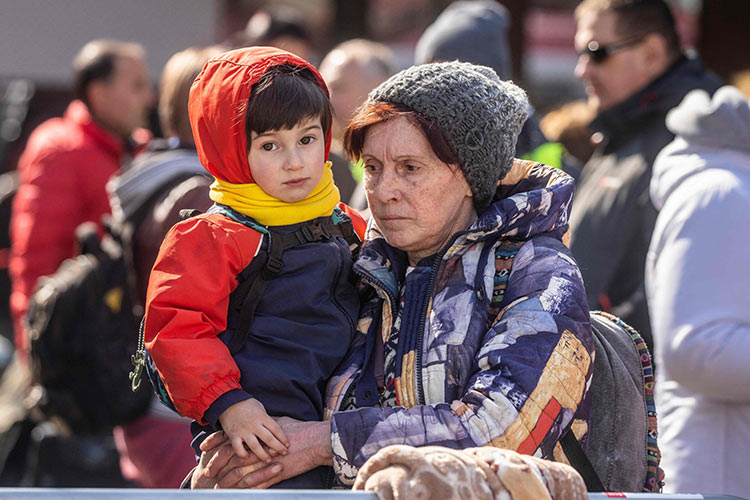 A Ukrainian woman and a child wait at a passport control office in Przemysl, Poland. AFP

Israeli Prime Minister Naftali Bennett has held numerous calls with both Putin and Zelenskiy in recent weeks to try to help resolve the conflict.

The foreign minister of Turkey, another country seeking to mediate, said Russia and Ukraine were getting closer to an agreement on “critical” issues and had nearly agreed on some subjects.

Mevlut Cavusoglu also said he was hopeful for a ceasefire if the sides don’t take a step back from the progress they have made toward an agreement.