Locals inspect the bullet-riddled vehicle where three Palestinians were killed in an operation by Israeli forces. AFP

Three Palestinians were killed Friday morning and eight others wounded in an operation by Israeli forces in Jenin in the occupied West Bank, Palestinian news agency Wafa reported.

The three men were killed when Israeli forces, who have increased their operations in the area in recent months, opened fire on the vehicle in which the men were travelling.

“Fierce clashes” were happening in the area at the time, according to Wafa.

An AFP photographer at the scene saw the bodies of the three young men at the morgue, as well as a white vehicle riddled with bullet holes.

The Israeli army said in a brief message in Hebrew that it was conducting an operation in Jenin to locate weapons from two different locations.

Their soldiers came under gunfire as they arrived at the first location and retaliated, the army said. 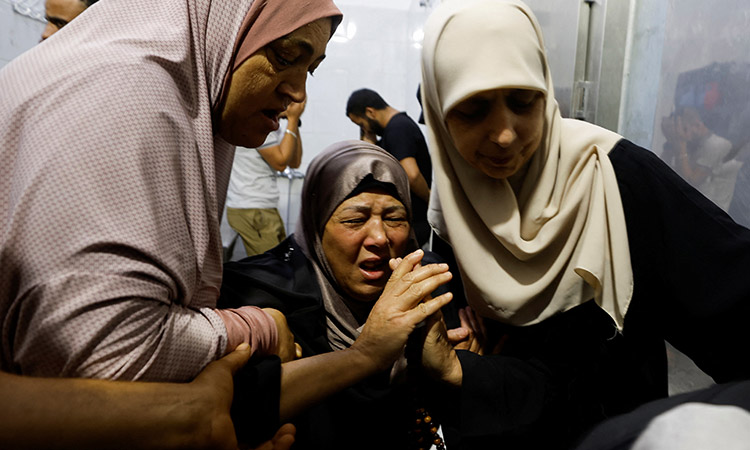 People mourn the dead at a hospital following an Israeli raid in Jenin. Reuters

They added that a suspicious vehicle was seen on the side of the road on their way to the next place.

“Shots were identified towards the soldiers who thwarted the terrorists’ plans to target them,” the army said, adding that they found weapons, including two M-16 assault rifles and cartridges at the scene of the clashes.

The Israeli army has ramped up raids in and around the occupied West Bank’s Jenin camp, a stronghold of Palestinian armed factions.

Journalist Shireen Abu Akleh, a prominent TV reporter with Al Jazeera, was shot dead last month in Jenin while she was covering an Israeli army operation.

The Palestinian Authority, Al Jazeera and Qatar, where the channel is based, accused the Israeli army of killing the journalist.

A Palestinian probe said the reporter — who was wearing a bullet-proof vest with “press” written on it and a reporting helmet when she was shot — was shot dead in what it described as a war crime.

Israel has denied the allegations, arguing that she could have been killed by a Palestinian gunman, but later said it could not rule out the possibility that it was Israeli soldiers.