An ardent lover wanting to meet his girlfriend cut off the electricity of a village so that he could sneakily spend some time with the love of his life.

Every day in the world such strange events happen that the human intellect is stunned to know about, such an incident took place in India.

The man is an electrician and somehow knows all the power sources in the village.

According to local media, the incident took place in Ganeshpur village of Purnia district of Bihar, where the man fed up of waiting for a chance to see his girlfriend took out power lines.

It was revealed that the electrician repeated the feat several times.

VIDEO: Shirtless Indian cop suspended for forcing woman to do his body massage

VIDEO: Outrage on social media after an Iraqi shoots at target in his daughters mouth

According to reports, the whole village was disturbed by the daily power outage and was trying to solve the problem of what was the real reason for such outage.

It was reported that the whole village was plunging into darkness every evening at a certain time. Local said that nearby villages had no such issues.

The villagers of Ganeshpur had to dig deep to solve the power problem and when they found out the real reason, they were shocked.

According to eyewitnesses, after the man was caught red-handed, the villagers got the couple married.

To talk about power cuts, we must mention that recently, two sisters married the wrong groom in India due to a power cut at a wedding ceremony held in Aslana village in India’s Madhya Pradesh state, where a the power cut caused much chaos in the proceedings. 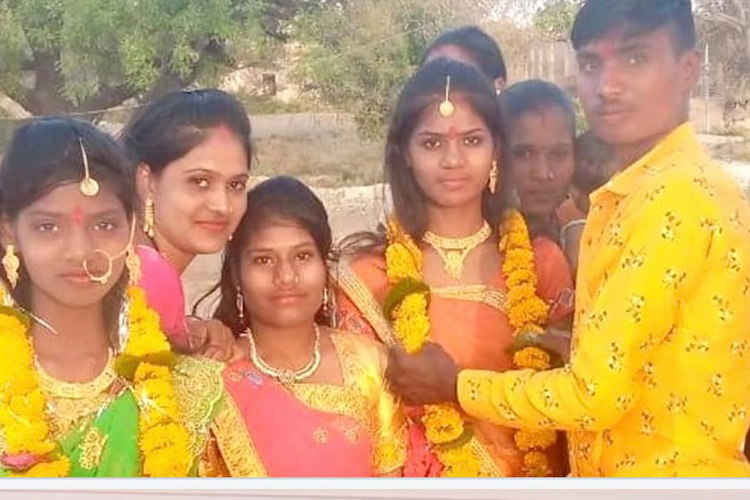 Power couple: The sisters and the grooms pose for a photograph.

Because of the confusion in the ceremony, the priest continued the rituals, but he confused the couple by mistake.

According to the father of the two brides, the priest made the mistake by marrying each girl to the wrong man, because they were wearing a similar red dress with the same headdress, according to the local media.

It is a tradition in India that men have to wear a veil of flowers during the wedding.

Despite the fact that mistake was later corrected, it shed the light on repeated and common blackouts in India due to the increasing demand for energy, as a result of the rising temperature.

It is worth noting that temperatures in northern India rose to 47°C, and neighbouring Pakistan suffered its hottest March in 61 years.