A woman touches a picture of officer Joseph Santana at a makeshift memorial in El Monte, California. AP

The wife of a man who killed two Southern California police officers Tuesday in a shootout told a television station that her husband had previously attacked her and she warned the officers that he had a gun inside a suburban Los Angeles motel.

The gunman, identified as Justin William Flores, was shot and killed at the scene. His wife told KCBS-TV that he had attacked her two days ago and she had moved into the motel to escape him but he tracked her down.

“I am so deeply sorry, my deepest condolences for saving me, I’m so, so, so sorry,” Diana Flores tearfully told the TV station. “They didn’t deserve that, or their families. They really didn’t. They were trying to help me and I told them before they went in the room, ‘Don’t go in. He has a gun.’”

The officers – Cpl. Michael Paredes and Officer Joseph Santana, who were identified Wednesday — were patrolling their shared hometown when both were slain while investigating a possible stabbing at a motel in El Monte. 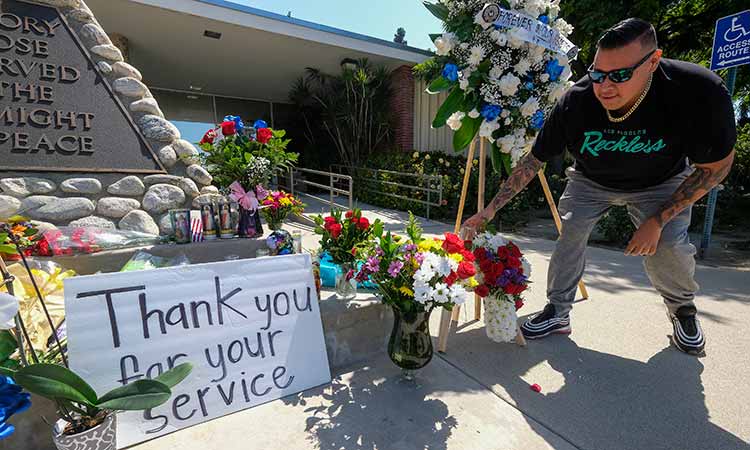 A man places flowers at a memorial on Wednesday outside El Monte City Hall at a motel in El Monte, California. AP

Gov. Gavin Newsom announced that flags at the state Capitol will be flown at half-staff in their honor.

Paredes and Santana — one on the force for more than two decades and the other for just months — were both were raised in and worked for the city of El Monte, a suburb of 107,000 people in the San Gabriel Valley. They became only the third and fourth officers in the El Monte Police Department’s history to die in the line of duty. A vigil is scheduled for Saturday.

Flores was on probation for a gun charge at the time of the shooting, which occurred a day after his probation officer requested that he return to court later in the month, court records show.

The coroner’s office has not yet released the name of the suspect but the Los Angeles County District Attorney’s Office identified Flores to the media. 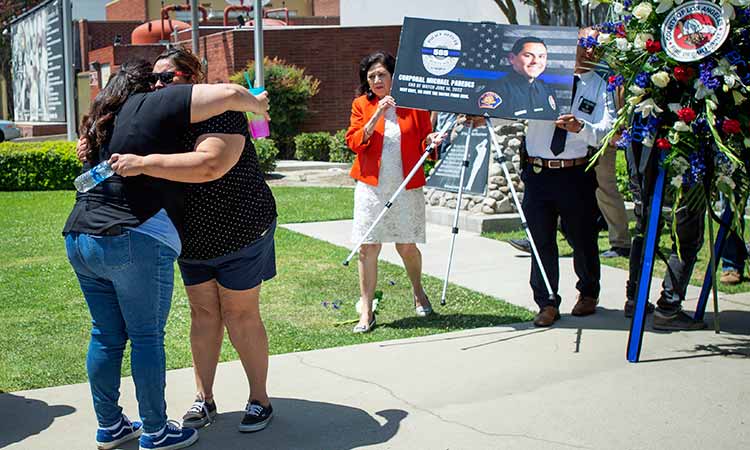 Mourners on Wednesday left bouquets, wreaths of flowers and candles outside the El Monte police station to honor the fallen officers.

“Corporal Paredes and Officer Santana paid the ultimate sacrifice,” the city of El Monte wrote in a news release, “while in performance of a noble profession, serving the community they loved.”

Flores, 35, served two stints in state prison for vehicle theft and burglary, according to the California Department of Corrections and Rehabilitation, and was most recently released in 2012.